Pelham looking to repeat as region champs despite difficult schedule 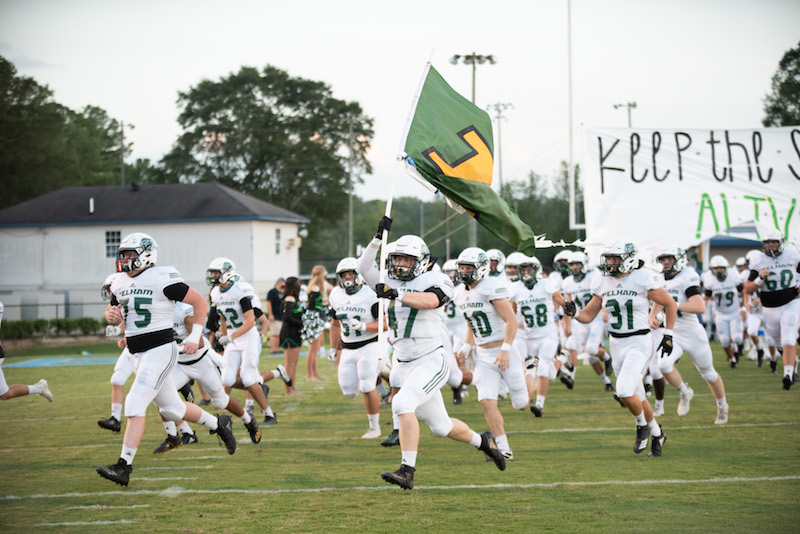 The Pelham Panthers made it through last year's challenging schedule as region champions and will hope to replicate that success this season. (File)

Many were surprised by what Pelham was able to accomplish during the 2020 football season with the Panthers winning their third region championship in school history, but that success has quickly turned them into a team to be on the lookout for going into 2021.

Not only did the Panthers finish 8-3 overall last season and 6-0 in region play, but all three losses came by seven points or less, including a two-point loss to Lee-Montgomery in the first round of the playoffs.

On the flip side of that, however, Pelham enters this season hungry not only because of how close they were to a perfect record and a playoff win, but also because three of the team’s wins were by 10 points or less.

Head coach Tom Causey said he knows how close last season was to being even more special, but also how close the Panthers were to finishing with two or three more episodes.

This year’s schedule will feature the same challenges in different locations, flipping last year’s schedule, which should set up for another run at a region championship, especially considering the talent that returns.

One of the best sights for the Panthers heading into the season is three consecutive home games to kick off the season, starting with a battle against Mortimer Jordan on Friday, Aug. 20.

Pelham won the matchup 28-21 a year ago, but the Blue Devils should be improved this season and will be a tough test out of the gate as both teams look to gain early confidence.

A week later, the Panthers will welcome rival Oak Mountain, who is coming off one of its best seasons in school history, just missing out on a trip to the Class 7A semifinals.

Last year, the rivalry battle between the two teams marked one of the close losses for Pelham, as the Eagles picked up a seven-point win.

This year’s battle, however, should look a little different with Tyler Crane taking over as the new Oak Mountain head coach. That likely means the option attack will be a thing of the past for the Eagles, while the two teams will see two of the best quarterbacks in the county square off against one another in a battle between Evan Smith and Will Lankford.

The winner will gain confidence heading into the first week of region play the next week.

That’s when Pelham will host Calera in another county battle on Sept. 3.

It will mark a second consecutive week where the Panthers will have the coaching edge from an experience standpoint.

Calera will be breaking in new head coach Jason Hamlin, but they’ll enter the game with a promising group of athletes looking to get over the hump from last year’s 49-41 loss.

Pelham, however, should have the edge as the two teams battle for a 1-0 start in region play.

The Panthers will hit the road for the first time on Sept. 10 when they travel to Stanhope-Elmore. The two teams have met three times since 2012, with each matchup being decided by 14 points or less, including last year’s 35-25 win by Pelham.

A week later, Pelham will return home for what should be one of the best games in the county this year against rival Helena on Sept. 18.

Last year, Helena was forced to forfeit the game due to COVID-19 hitting the program in the middle of the season, which has led to the tension building between the two for an extra year.

With that forfeited win, the Panthers have now won four of the five matchups in the series, but the last time the two met on the field, Helena picked up a 62-20 win in 2019.

Both teams return plenty of offensive talent, especially at the quarterback and receiver positions, which could make for a back-and-forth battle that could become one of the best games of the season.

That will lead into a break from region play on Sept. 24, but the Panthers will get another tough county opponent when they travel to Chelsea.

Last year’s game started out with a back-and-forth battle in the first half, but Pelham eventually created separation en route to a 47-28 win. The two offenses should be the highlight again this season, while the defenses should be improved by that point in the season.

With five weeks left in the season, Pelham will play its last home game Oct. 1 against region foe Wetumpka.

The Panthers put together a strong performance in a 34-18 win a season ago, which was one of the biggest confidence boosters for the team down the stretch.

Pelham will then hit the road for the final three weeks of the season with a bye week also tossed in the mix.

The difficult road gauntlet to end the season for the Panthers will begin on a Thursday night with a trip to Benjamin Russell on Oct. 7.

Pelham won last year’s game 37-12 in convincing fashion with the defense playing its second best game of the season and should be the favorite once again this year.

Following a bye week the next week, the Panthers will travel just down Interstate 65 to take on Chilton County on Oct. 22 to close out region play.

Pelham is 4-1 all-time against the Tigers and won last year’s game 41-7 in the team’s best showing of the season.

The regular season will then come to an end on Oct. 29 in what is traditionally a fun battle against Homewood.

The Panthers have lost seven straight in the series and nine of the last 10, but five of the losses in the span have come by seven points or less, including a 20-18 loss last year.

Pelham felt like the better team a season ago with the defense giving up the third most points to the Patriots all season.

That should give the Panthers some motivation heading into that matchup this year, as they’ll look to gain confidence ahead of a hopeful playoff matchup one week later.