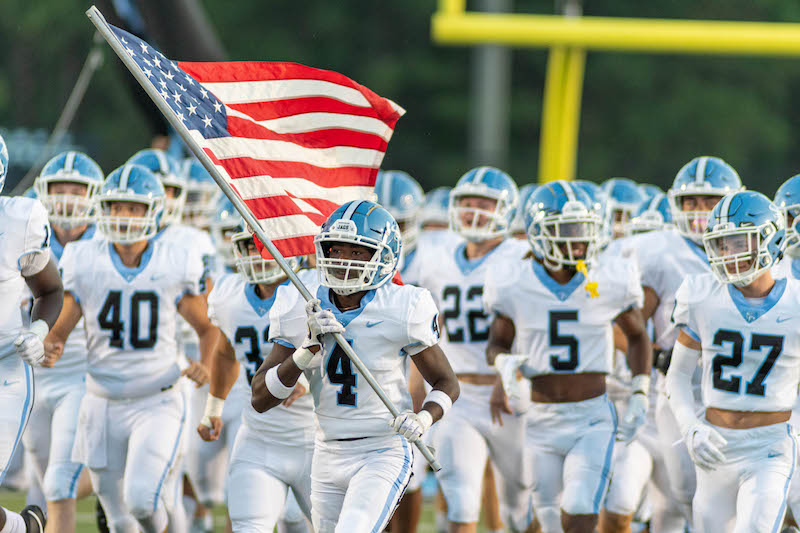 The Spain Park Jaguars will face one of the state's most difficult schedules this season, as they look to battle for a playoff spot. (File)

The 2020 football season got off to a promising start for the Spain Park Jaguars with a 2-0 start behind wins of 52-20 against Huntsville and 21-14 against Briarwood.

That, however, quickly shifted into six consecutive losses in the meat of their schedule against some of the state’s best teams.

Spain Park went on to finish the season 4-6 after winning its last two games by one point against Tuscaloosa County and Hueytown.

Despite the difficult stretch last year, the Jags were once again close, losing to top-two teams Thompson and Hoover by 13 points.

The Jaguars, however, gave up 38.2 points per game last year, which was the ultimate factor in each loss.

Heading into the 2021 season, the same challenges will present themselves on the schedule, while the Jags have lost several key players from last year,

The athletes, however, remain, while the defense should be improved and ready to show it against a difficult slate of games.

The Jaguars also get the benefit of seven home games and just three on the road this season, starting with back-to-back home games against Huntsville and Briarwood.

Spain Park will welcome Huntsville to town on Aug. 20, while the Lions will head to Jaguar Stadium a week later on Aug. 27.

The Jags handled the opener with ease last year behind a 52-21 win, and then showed they could handle coming from behind with a 21 unanswered points against Briarwood in a 21-14 win a week later.

This season, they’ll hope for a similar 2-0 start heading into one of the toughest two-game stretches any team in the face has to play.

Of the three road games Spain Park plays, two will come the next two weeks to begin region play and they’ll come against two of the best teams in the state.

They’ll start with a matchup against likely a top-five team when they travel to Hewitt-Trussville on Sept. 3. The Jaguars won the game two years ago, but have lost two of the last three by scores of 44-13 and 45-13.

Finding a way to stop a potent Hewitt offense will be key if the Jags hope to get off to a 1-0 start in region play.

Spain Park then gets the pleasure of traveling to Alabaster on Sept. 10 for a matchup with two-time defending state champ Thompson.

Last year, the Jaguars actually played Thompson closer than anyone, aside from Auburn in the state championship, when they almost came back for a win.

The Warriors ultimately won 48-35 and have everybody back this season, which will make it Spain Park’s toughest test of the season.

The Jags will then hit a key five-week stretch of games where they’ll likely need to win at least three games to have a chance at the postseason.

They’ll start with three consecutive home games, which will give them a great opportunity.

On Sept. 17, Spain Park will welcome Gadsden City to town in a must-win game coming off the difficult two games before.

The Titans finished 3-7 last year, but one of those three wins came against Spain Park in a 31-17 win. That was their only win against a Class 7A team.

The Jags have to flip the script this season if they want their playoff fortune to change.

That will lead into a bye week before another good opportunity comes knocking in a matchup against Oak Mountain and first-year head coach Tyler Crane on Oct. 1.

Spain Park will once again be looking to reverse the tale after last year’s game ended with the Jaguars losing 48-17.

Oak Mountain may be with a new coach, but the Eagles return plenty of talent from a team who advanced to the quarterfinals and was within a yard of likely getting to the semis.

In a rivalry battle, the Jags will hope to be in a tighter game this go around with a chance to win late.

Those two games will be key as the Jags then turn their attention to likely another top-five team when crosstown-rival Hoover comes to Spain Park.

Last year, like the Thompson game, the Jaguars were able to put together one of their best games and battled within 13 points before eventually losing 47-34.

This year, quarterback Bennett Meredith is now at Hoover, which should add even more fuel to the fire.

Spain Park didn’t beat Hoover until twice in 2015, but the Bucs have since responded with five wins in a row in the series. In a rivalry battle, however, three of the last four have been decided by 13 or less, which shows how close it can be.

The only other road game for the Jaguars will come on Oct. 15 against Vestavia Hills.

The Rebels will be under new leadership with Sean Calhoun replacing Buddy Anderson after 43 years. Calhoun, who was known as an offensive mind in Georgia, will be different to prepare for than an Anderson-coached team, but it won’t mean the challenge will be any easier after last year’s 32-7 loss for the Jaguars.

Spain Park will close out the region play against Tuscaloosa County on Oct. 22, before then ending the regular season with a Thursday night game against Hueytown on Oct. 28.

Last year, Spain Park won both games in thrilling fashion by one point, including a 63-62 shootout to end the season.

This year, they’ll hope to end the season with easier wins and also hope to do so in preparation for a playoff game.