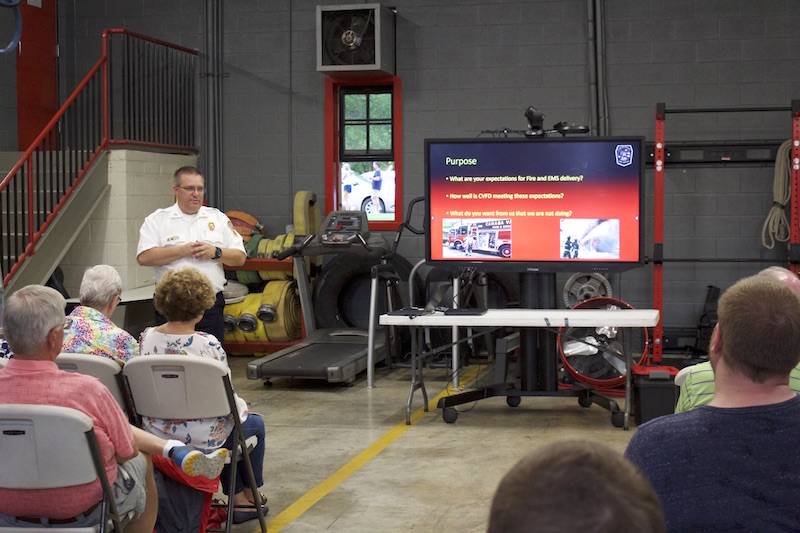 MT LAUREL — On Tuesday, July 13, the Cahaba Valley Fire and Emergency Medical Response District held the second of three meetings to discuss the possibility of raising fire dues in several communities along U.S. 280.

The proposed dues increase is part of a multi-million-dollar quality improvement plan aimed at addressing staffing shortages and facility needs at each of the district’s three fire stations.

Fire Chief Buddy Wilks said he is recommending the increase as the district’s communities have continued to experience rapid expansion and development over the last several years, which he said is resulting in a surge in emergency calls in the areas.

“Our call volume is increasing steadily every year. So, we’re trying to stay ahead of what’s happening in our community, which is continuing to grow as people move in,” Wilks said.

Just this year, Wilks said the fire department projected around 3,600 calls among the communities comprising Cahaba Valley, which includes Mt Laurel, the Narrows and Brook Highland.

As of June, the department has received over 2,000 calls in those areas, and is expected to exceed 4,000 by the end of the year.

An increase in dues would allow the department to expand its current budget from around $3.6 million to $5.4 million to cover more personnel and operating expenses related to an expansion of services.

According to Wilks, staffing needs can vary heavily depending on certain emergencies, with a heart attack requiring six staff members to some fires demanding well over 20 firefighters.

“We looked at every type of risk and incident that we respond to, and analyzed the number of people that we need to operate the task. We then came up with how many people we needed to successfully operate those tasks,” he said.

The additional funds primarily would be dedicated to fully staffing both the ambulances and fire engines at both the Mt Laurel and Narrows stations, which Wilks said would improve response times in what have become the busiest areas in the district.

Also among the department’s goals is to upgrade several of the district’s aging facilities, including replacing its 38-year-old, undersized U.S. 280 fire station with a new one on Brook Highland Parkway. Wilks said Brook Highland currently generates the highest volume of emergency calls in the district.

“What that does for us is it takes us off 280 so we’re not having to travel on the highway for a lot of our calls,” he said. “We know what traffic on 280 is like during the day: it’s gridlock, and our response times in that area sometimes jump to eight or nine minutes, and we’re just trying to go a mile and a half.”

Wilks said the department also wants to build and staff a Shoal Creek station to improve services to the communities of Shoal Creek, South Oaks, Stonegate Farms, Symer Lake, Hollybrook Lake, Springstone and The Shires, along with individual homeowners in the area.

One of the primary components laid out in the plan to fund these upgrades and staff increases is a proposed fire dues increase.

Residents’ biggest concerns were in relation to the portion of the plan, mostly due to a recommended change in the structure of fire dues.

The fire department is proposing changing the fee schedule from residential rates based on property value to a flat rate based on median home value of the district, which is about $362,100 based on values from the Shelby County Tax Assessor’s Office.

Applying a percentage assessment to meet budget needs would mean fees would total about $593.84 a year, or $49.50 a month, which would generate over $3 million from residential properties in the next year.

For residential properties whose value is greater than twice the median ($724,200), fire dues will remain the same as this group is already paying more than $593.84 per year.

During the meeting, residents expressed both support and concern for the dues increase, with some saying the fee change was too steep a price hike so quickly and that the structure change would disproportionately affect community members with lower incomes, specifically retirees who lived on fixed incomes.

Others said the dues increase was necessary and vital to maintain an adequate emergency response force.

Many residents questioned the timing of the fee structure change, especially with the city of Chelsea currently conducting a feasibility study into forming an independent school system. If approved, this action would likely prompt an annexation vote in several of the communities in which the fire department currently operates.

However, Wilks said that the fee adjustment is an independent matter, and the department’s strategic plan was conceived in 2019, mostly based on surveys from the community.

“We started working on this portion of the plan back in February and began then wanting to take this to the next step. This has nothing to do with the city of Chelsea,” he said.

According to Wilks, the last major change in the district’s fire dues structure occurred in 1999.

With such an extended gap, Wilks said it was always the department’s intention to first solicit community feedback before severely altering the fee structure, and that Tuesday’s meeting was just the first step in this process.

“We’re trying to make sure everyone is informed about what we’re trying to do so they can make an informed decision. We want to be as transparent as possible because it will ultimately be the community that makes this decision,” he said.

A third informational session is planned for July 27 with the Brook Highland community so residents will have additional opportunities to share feedback, Wilks said.

Wilks said he is currently evaluating community feedback received thus far and said he is willing to consider revisions to the proposal based on community input.

In order to be as democratic about this process as possible, district residents will have the chance to vote for or against the dues increase in August as part of a special election.

All registered voters who live in the district are eligible to vote. The election date and location will be set by the Shelby County probate judge.

Any changes made to the district’s fire dues structure would go into effect Oct. 1.