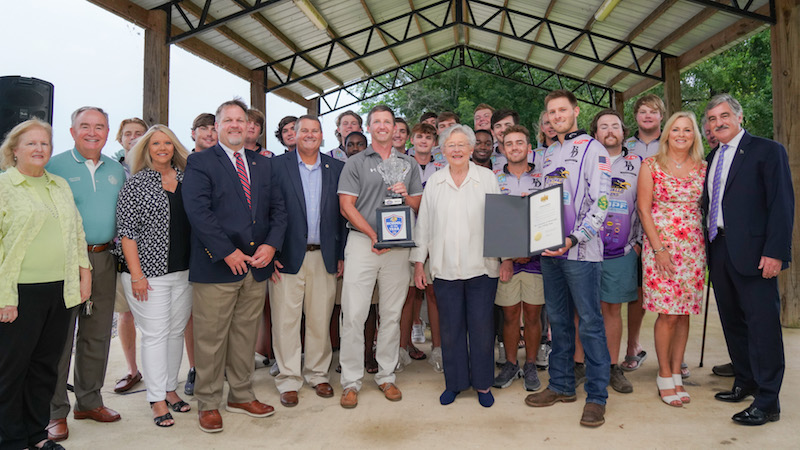 COLUMBIANA – The members of the University of Montevallo’s bass fishing team gathered at Beeswax Creek Park on July 27, not to fish but to accept praise for their extraordinary accomplishments this year.

Alabama Gov. Kay Ivey honored the team during a ceremony for topping more than 200 collegiate fishing programs across the country during the 2020-2021 season to earn the distinction of the Bass Pro Shops School of the Year presented by Abu Garcia.

“How wonderful to win a national championship in something you love to do,” Ivey said. “Your perseverance through such a tough year has been recognized as all of you came out on top as the 2021 Bass Pro Shops School of the Year. Hat’s off to you guys.”

The bass fishing team is a part of the UM President’s Outdoor Scholars Program, which was established in 2015 to offer college scholarships to students with a passion for wildlife and conservation.

“This scholarship program provides students with a chance to earn a college degree while actively working to conserve our natural resources in our great state,” Ivey said. “I’m proud to say that each member of the University of Montevallo’s bass fishing team has received this scholarship and has clearly made the most of the opportunity.”

UM President Dr. John W. Stewart III thanked Ivey for her support of the program since its inception and recognized William Crawford, director of the Outdoor Scholars Program, and Assistant Director Scooter Stano for their work in advancing the program.

“My wife Cindi and I offer our congratulations to the bass fishing team and look forward to many such successes in the future,” Stewart said. “We appreciate the high-level recognition that Governor Ivey brought to the special event today, and her support of our students throughout her term.”

Crawford said the team competed in more than 30 tournaments over the last year to make up for the COVID-19 pandemic shortening the previous season.

“It was definitely a grind and a lot more on these guys’ plates than we normally have, so for them to do what they’ve done over that period of time really speaks volumes to the dedication they had,” Crawford said. “Things were a little different because of COVID, but one of the things that stayed true was allowing these guys to get out and do what they enjoy doing.”

The team competed against some of the largest universities in the nation and earned points based on their performance.

UM’s team took over the top ranking in the national standings in November 2020 and never relinquished its lead.

Montevallo, which finished second in last season’s School of the Year rankings, knocked off two-time defending national champion McKendree University of Lebanon, Illinois, and topped large universities such as the University of Tennessee, Auburn University and East Carolina University en route to this year’s national crown.

“These guys have worked so hard over the last few years to accomplish this one goal,” Crawford said. “To see it all kind of come together on a day like today with the governor here to represent the state and our natural resources and the accomplishments of these guys is really special.”

“To have a team from the state of Alabama to win the national championship is a big deal,” he said. “We really see this as a great training ground for the young men and young women that come through your program.”

Shelby County District 1 Commissioner Kevin Morris noted the positive example the team has set, and said, “You’re paving the way for other students at Montevallo through the Outdoor Scholars Program to be able to enhance their college careers and also look for ways to give back to our communities.”

The team is comprised of students from Shelby County and across the country.

“We’ve got a great recruiting class coming in, and we didn’t lose any guys from last year,” Crawford said. “We’ve got our full roster coming back, so we’re really excited to see what next year may bring.”

Get to know Athlete of the Week Evelina Teran