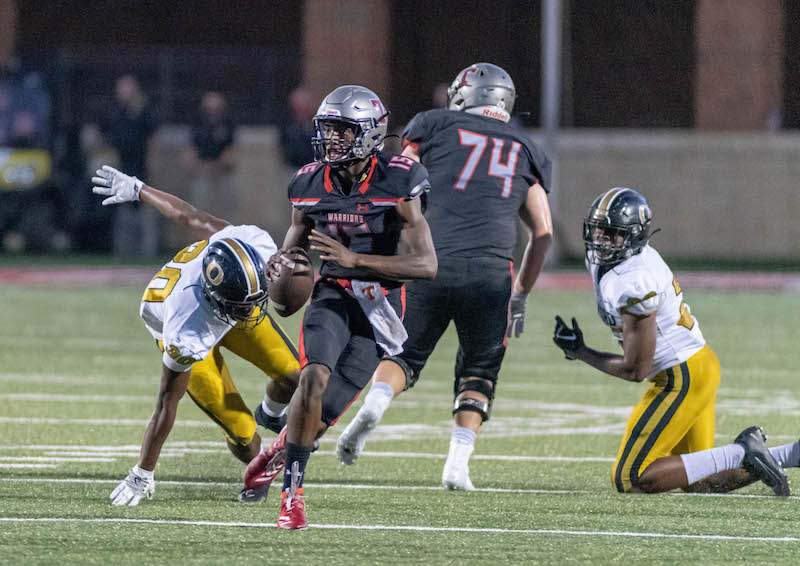 The two-time defending state champion Thompson Warriors will open the 2021 season with a trip to Oxford, which is just one of many exciting matchups to kick off the opening week of the high school football season. (File)

The countdown is over, the fields have been lined, the stadiums are ready. It’s game week in Shelby County.

After a long nine months without football, it will return this week starting on Thursday night with Vincent and then continue Friday night with 11 more games

Remarkably, 10 of the 13 teams playing this week will open their season at home, while one team will play a county matchup on the road in our Game of the Week featuring Chelsea and Oak Mountain and two others will travel outside of the county.

It is sure to be an exciting week to kick off the 2021 season, and we break down each matchup below.

These two teams will meet for the second year in a row to open the season with Thompson winning last year’s game 56-34. That battle marked a matchup of defending state champions, but this year, Thompson will be the only one entering the season as two-time defending champs. The Warriors enter the season No. 1 in Class 7A with one of the best rosters in the country as a top-five team nationally. Oxford will be under a first-year head coach, and while Sam Adams has shown his potential at other stops in the state, this is a difficult game to open a new job with. Thompson’s offense is loaded and will be every bit as good as last year’s, while the defense has four players ranked inside the top 50 nationally. They’re just too talented and experienced. Thompson 42, Oxford 17

This matchup marked one of four wins for the Jaguars and one of two in a row to start the season before six consecutive losses. Spain Park won that game 52-21 in a blowout, and will need a similar performance this year to gain early-season confidence. The Jags have struggled defensively the last several years, while the offense took some major blows in the offseason. Showing early that the defense has improved and the offense can handle the hits is extremely important with matchups against 6A No. 5 Briarwood a week later and top-five 7A teams Hewitt-Trussville and Thompson the two weeks after that. The Jags should have enough to at least get off to another 1-0 start. Spain Park 35, Huntsville 21

One of the most talented teams on paper, the Pelham Panthers will open the season against Mortimer Jordan this Friday, a game they won 28-21 last year. This season, the Panthers enter the season more talented with the return of 90-percent of a team that won the third region title in school history. Mortimer Jordan went on to finish 1-8 last year, while the Panthers got better each and every game until losing their last two by two points. That has this experienced team hungry and ready to run the table this season. Pelham 35, Mortimer Jordan 21

The Helena Huskies will enter this season replacing several key pieces from last year’s team, but they’ll take on a Dallas County team they beat 43-0 last year. Taking on a 4A team, the Huskies should have a chance to get new players some work early in the season, while also showcasing some of the stellar returning talent they have. Helena 35, Dallas County 7

Each season, Calera seems to inch closer to beating former region rival Demopolis. Last year was their closest battle yet with the Eagles falling by two points in a 14-12 game. It wasn’t a bad loss with Demopolis finishing the season 11-1 last year, but it doesn’t take the sting away. This season, the Eagles will enter the year under new head coach Jason Hamlin hoping for this to be the year they have a breakthrough at the 6A level. The talent is there at certain positions, but there are still depth concerns at certain positions. That said, the Eagles won’t have any less depth than Demopolis this season, which should lead to another close battle. It’s hard to pick Calera to pull off the win for the first time under a new head coach after never having done it before, but don’t be surprised if it happens. Calera 14, Demopolis 21

A favorite in Class 6A this year as the No. 5 team entering the season, the Briarwood Lions won’t have a cakewalk in their opening game. Taking on Madison Academy, who finished 9-0 in the regular season and 10-1 overall last year, the Lions will have a two-classification advantage, but that doesn’t make the challenge any easier. The Lions, however, could have their best offense in several years, while the defense always shows up. They will have a lot of new faces on the defensive side of the ball, but this year’s Briarwood team is being talked about as a state championship contender in one of the most difficult classifications in the state, which gives them a leg up in this battle of elite teams. Briarwood 28, Madison Academy 14

Montevallo will have to play up a classification to start the season with a matchup against 5A Marbury, but it’s a challenge the Bulldogs are welcoming with some of the team’s top players back. Last season, they had to forfeit this game and went on to start 0-4 before winning seven in a row and eventually getting to the second round of the playoffs. This year, Montevallo will be amped up to play week one instead of forfeiting, which could be the edge the team needs in this matchup, but this game may be as much of a toss-up as any to start the season. Montevallo 27, Marbury 24

The Vincent Yellow Jackets were forced to start last year 0-3 with three consecutive forfeits due to COVID-19. That possibly prevented a 5-0 start. This year, the Jackets might be in the best shape they have been under Lucas Weatherford, and they’ll be hoping to make up for missing those three games last year, including this season-opening game. Vincent will have a classification advantage in this matchup, but Marbury put together a 9-2 season last year. On paper, these two are probably pretty even, and the Yellow Jackets are going to need to prove themselves, but they’re hungry and that should drive them in the opener. Vincent 22, Marbury 20

Aside from a win against Coosa Valley last year, this was Cornerstone’s closest game. The Chargers will hope to redeem last year’s 28-12 loss, but they’ll have to prove they can win each week this season. It’s a hungry team with a strong senior class, but showcasing what they can do on the field early in the season will be key to belief. Cornerstone 14, Southern Prep 21

Hooper Academy was a .500 team last year, while Coosa Valley finished winless for the second year in a row. The Rebels, however, have turned back to head coach Vince DiLorenzo who led them to a state championship in 2010. His return has excitement building around the program, but each week will have to mark improvement before full faith can grow in what they are capable of. Coosa Valley 20, Hooper 34

This will actually mark the second game of the season for Evangel, who opened the season against Franklin Christian this past Friday. The Lightning won this matchup 40-6 last season, and while they lost some key players, they should handle this one with ease once again. Evangel 42, Meadowview 13