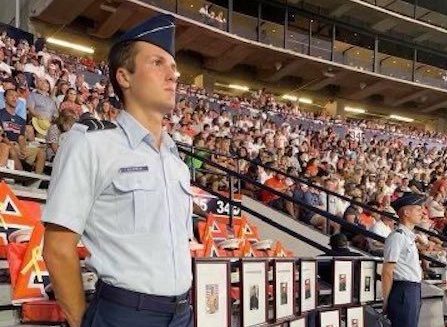 Helena's Jabe Hildreth stood guard next to the 13 seats honoring the soldiers who were killed on the Aug. 26 Kabul airport attacks. (Contributed)

HELENA – During Auburn’s first game of the season, 13 seats were left open as a way to honor the U.S. soldiers who were killed during the Aug. 26 attack outside Kabul’s airport in Afghanistan.  Next to the seats stood two of Auburn’s Air Force ROTC members, including Helena’s Jabe Hildreth.

“I wouldn’t say it’s emotional, but a huge sense of pride overtakes you,” Hildreth said. “To be an American and represent those who have fallen and paid the ultimate sacrifice for our country, it’s very much a surreal moment.”

Hildreth received a scholarship to Auburn through the Air Force ROTC program, and said he has always felt a connection to serve his country. It’s the tight knit community that made him fall in love with the ROTC program, and said the connection felt with others who want to serve their country is a palpable feeling. When the opportunity to represent his country and honor the 13 service members who died, Hildreth said he jumped at the opportunity.

“[Auburn University] sent out an email asking if you would like to do game day flags and come to the game to do this and I jumped all over it,” he said. “I thought it was a huge honor to be able to pay my respects to them in that way.”

A photo of Hildreth and his Air Force comrade was posted to Twitter and has since been re-Tweeted over 6,000 times, and has received over 78,000 likes. Hildreth was not even aware the photo had been posted until family and friends began sending it to him. He said there has been an “overwhelmingly positive response” to the photo, but through it all Hildreth remains humble, saying he was just doing what any proud American would do to honor the fallen.

“I was doing what I felt like was my duty,” he said. “Being able to stand for something much larger than yourself…it gives you an overwhelming sense of pride to be a part of that,” he said.

Hildreth said the attack was a “big eye opener” for many people to how “things can go upside down so quickly.”

“I think that Americans for the most part don’t really realize what the outside world outside of America looks like,” Hildreth said. “I think people need to be a lot more appreciative that we live in a country where we have military fighting for us and defending our freedoms…I think we need to appreciate what we have and go from there.”