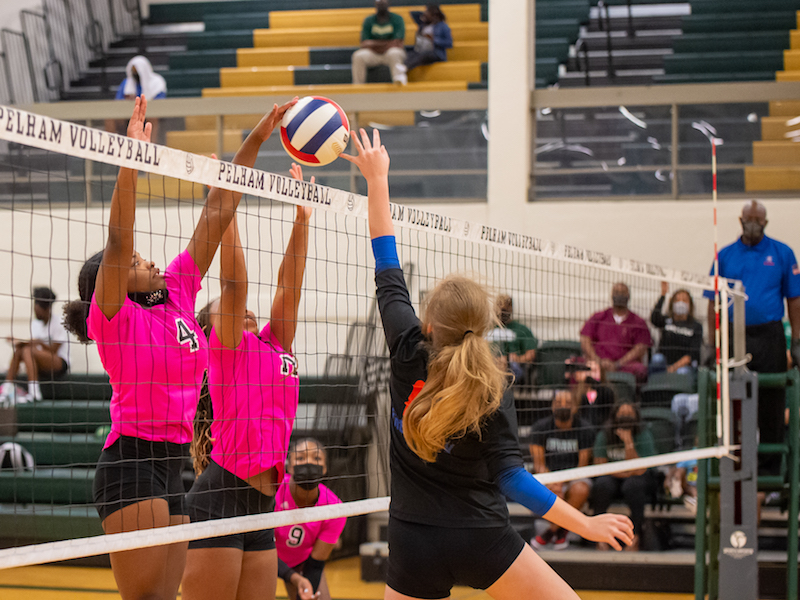 The Pelham Panthers continued an impressive season with a tri-match sweep of Southside and Oxford on Tuesday, Sept. 14. (For the Reporter/Larry Dancy)

OXFORD – The Pelham Panthers got to within one win of 20 on the season thanks to tri-match sweep on Tuesday, Sept. 14.

Entering the tri-match at Oxford High School as winners in 15 of their last 16 matchups, the Panthers extended that to 17 of 18, which brought their current win streak to six.

It wasn’t easy with a tight 2-1 win against Southside to kick off the night before then sweeping host Oxford 2-0.

A kill from Averi Smith, however, sparked a 5-1 run for Pelham, which also included an ace from Tammy Melendez.

That helped the Panthers gain traction in the set, as they played with the lead throughout and eventually gained a 24-19 advantage. Courtney Proffit then put the set away with a kill to end the 25-19 win.

Southside, however, bounced back in the second set.

After falling behind 4-0, the Panthers came back to eventually tie the set at 9-9. That led to the two teams trading points for a while, before Pelham regained the lead.

The Panthers actually regained a five-point advantage at 20-15, but Southside battled back in the clutch to tie the set at 24-24, eventually capitalizing on the shift in momentum to win the set 26-24 and even the match.

Pelham, however, quickly regained its composure. The Panthers stormed out to a 3-0 lead in the tiebreak set, which allowed them to play more loose.

The set was still a tight one, but up by two on match point, Emma Studdard sealed the win with an ace for a 15-12 set victory and 2-1 match win.

Elizabeth Hayhurst led the team with 14 kills, while Proffit and Camryn McMinn had seven and six, respectively.

Averi Smith led the team in digs with 15, while two others finished with more than 10. Melendez was one of those two with 13, while Jaden Jones added 11. Shay Walsh was the team leader in assists with 29.