Spain Park volleyball bounces back in a big way 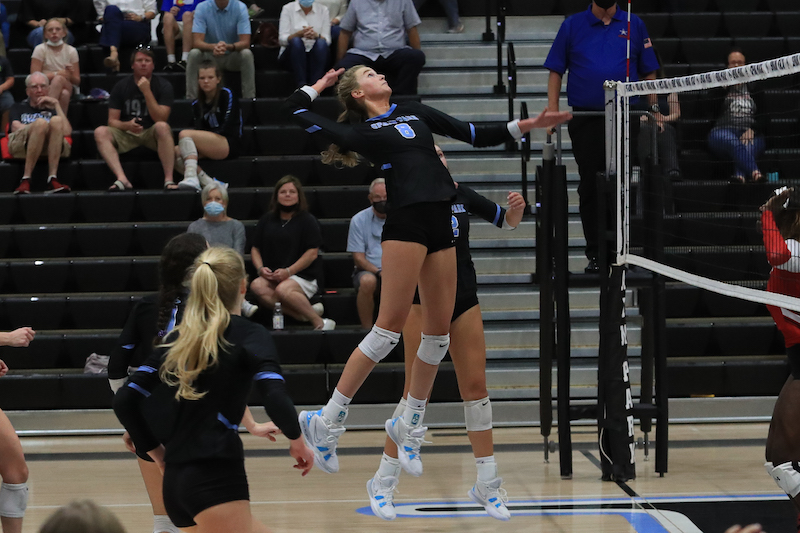 Spain Park’s Audrey Rothman had 63 kills between matches against No. 2 Thompson and No. 3 McGill-Toolen during the week of Sept. 13. (For the Reporter/Dawn Harrison)

MOBILE – The Spain Park Jaguars couldn’t have bounced back in a bigger way on Thursday, Sept. 16.

After losing their No. 1 ranking to Thompson following an exhausting 3-2 loss to the Warriors two days earlier, the Jaguars had no time to sulk heading into a matchup with third-ranked McGill-Toolen on Thursday, Sept. 16.

McGill, who entered as winners in 10 of its last 11 matchups, couldn’t find the early success it had in much of this season’s matches.

The Jackets challenged Spain Park, but the Jags were able to make the necessary plays late in the opening set to pick up a 25-20 win for a 1-0 advantage.

That became the largest deficit in the first three sets of the match, as the two teams settled in for a battle during the next two sets.

Neither team seemed took advantage of momentum swings in the second set, which led to a back-and-forth battle until the Jaguars gained a 24-22 lead and set point. They capitalized on the moment and put the set away one point later for a 2-0 advantage.

In the third set, however, the Jags faced their first adversity of the match.

In shape to close out the match, Spain Park had chances throughout and again late to complete the sweep, but the Yellow Jackets were clinging to life.

That led to a thrilling set that went beyond the typical 25 points all the way up to a 27-27 tie.

McGill, however, dug in and found a way to claw out the next two points to claim a 29-27 set victory and draw within one set of evening the score.

Despite the exhausting third set, Spain Park was able to rebound in the fourth.

Looking to keep momentum from completely slipping away, the Jags were able to play with the confidence of still having a lead, and it paid off.

They went on to regain their composure and put together their easiest set victory of the night at 25-18 to finish off the 3-1 win.

With the win, Spain Park became the first team in Shelby County to reach 20 wins, as the Jags improved to 20-4 this season.

During the two-match stretch against two top-three teams, Audrey Rothman led the Jags with 63 kills and also added 17 digs, 11 assists and four blocks.

Behind her, Emily Breazeale finished second on the team with 26 kills, while also adding 11 digs and two aces. Lilly Johnson led the team in digs with 31 and also had 16 digs, while Brooklyn Allison finished the week with 31 digs and nine assists. Haley Thompson also had a strong week with 26 assists and nine digs.