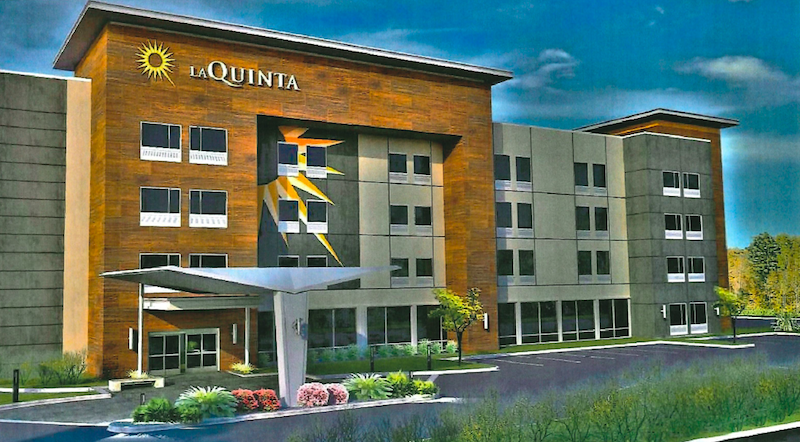 The Chelsea Planning Commission approved a site plan and overlay district review for a proposed La Quinta hotel to be constructed behind the new Buffalo Wild Wings and Arby’s restaurants off U.S. 280 in Chelsea. (Contributed)

CHELSEA – Plans for the construction of a hotel in Chelsea are moving forward.

The proposed hotel will be built on property next to Tractor Supply and behind the Buffalo Wild Wings and Arby’s restaurants under construction on Atchison Lane, the new service road.

City Engineer Keith Hager said he met with the owner and engineer for the project to discuss architectural plans and overlay district requirements.

“We have a couple of minor issues that we want to get clarified for the plans, but overall, I believe that he’s met the intent of your design,” Hager said to the commission.

Jerry South with South & Associates Inc. reviewed the site plan with the commission, noting the hotel will be built on nearly 2 acres of property at the end of Atchison Lane.

Regarding the hotel’s positioning behind Buffalo Wild Wings and Arby’s, Hager said the sides of the restaurants facing the front of the hotel will be “presentable” and in keeping with the city’s design standards.

Mayor Tony Picklesimer said he is excited to see the project come to fruition.

“This is their ninth hotel, and they could have chosen anywhere in the Southeast, but they chose Chelsea,” he said. “We appreciate it.”

A target completion date has not been set, but officials anticipate breaking ground at the site in November.