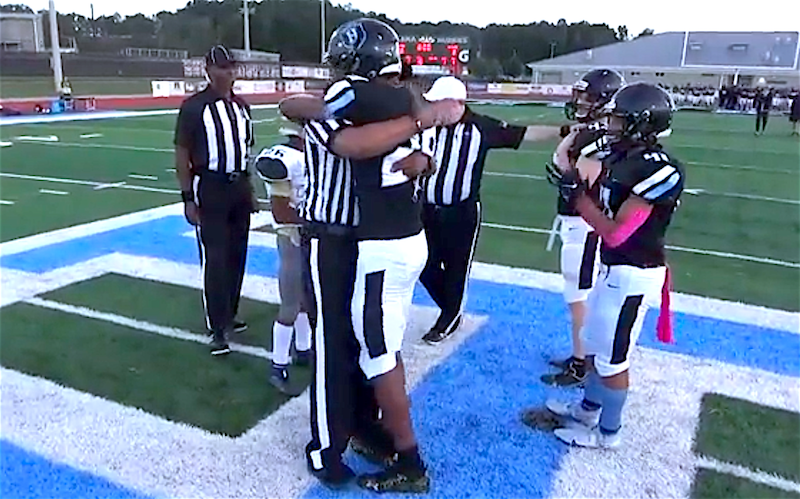 Helena’s Fred Grooms Jr. hugs his dad Fred Grooms Sr. at midfield before a football game on Monday, Oct. 18. Grooms Sr., who has been stationed in Kuwait for the U.S. Army for the last year, surprised his son at the game. (Contributed)

HELENA – Walking out to midfield alongside two teammates on Monday, Oct. 18, Helena freshman Fred Grooms Jr. started to shake hands with the opposing team’s players, but he was unaware who was standing just behind them.

“All officials, come in here,” said the head referee around the coin-toss huddle. “We need to tell these guys how we need to get them to act right. Make sure you get all of the officials’ faces down. Know them good.”

Grooms, already wide-eyed, immediately looked to his left and made eye contact with one official and followed down the line until he looked at each official.

As he scanned back through a second time, he noticed a smiling face, before that smiling face busted into laughter. It was his dad.

Home for the first time in a year after serving for the U.S. Army in Kuwait, Fred Grooms Sr., donned in a complete referee uniform, was there to surprise his son.

As soon as he recognized him, Grooms Jr. gave his dad a jubilated hand shake before jumping into his arms for a tight hug, not letting go for 20 full seconds.

“It was overwhelming. My son isn’t the outwardly emotional type,” Grooms Sr. said. “He’s the one who won’t hug you, kiss you. So for him to hug me as tight as he did last night was really something special.”

It was an embrace that wasn’t supposed to come until early November, with his deployment in Kuwait still having two weeks left.

But, Grooms Sr. knew his son’s final football game of his freshman season was coming up, and he wanted to be there for it.

“I wasn’t originally supposed to leave until the end of October,” he said. “I understood my son’s final football game was coming up so I asked if I could leave a couple weeks early. I told my commander in Kuwait, and they were in agreement and said I could leave two weeks early.”

“I talked with coach Busby, and he was nice enough to say, ‘Yeah, let’s see what we can do.’ That’s when he came up with the idea of talking with referees,” Grooms Sr. said.

After getting off the phone with Busby, he then had to find a way to get a referee uniform. Busby tried to help, but couldn’t find one, so Grooms Sr. made his way to a sporting goods store in Homewood where he found just what he needed.

That, however, was one of many obstacles he had to overcome to pull off the surprise.

He also had to sleep in his house on Sunday night without his son or daughter finding out.

That’s where his wife came into the picture.

His flight got in at 8:30 p.m., but Garnet had to make sure the coast was clear by the time they walked through the door that night.

Their daughter, who they say is the hardest to keep out of the loop because of how observant she is, was already in bed, but Grooms Jr. was still awake.

“You know teenage boys, there is no telling when they’re going to want to go into the kitchen to get food or something,” Garnet said. “So I made sure the coast was clear and kept him quiet until we got to the bedroom.”

But Grooms Sr. remained anxious and excited about seeing his family for the first time in a year.

“He was so anxious. I thought he was going to blow his cover. It got really challenging the next morning, because we had to make sure he used the bathroom before I left so they wouldn’t get suspicious of a toilet flushing after I left,” Garnet said with laughter cracking through her words.

But the kids made it out the door and to school, setting the stage for a special day.

Grooms Sr. arrived to Helena around 5 p.m. to get ready for the special moment, but all of a sudden, the emotions were starting to build up.

As he suited up and walked onto the field behind the opposing captains, containing those emotions became challenging.

“I will tell you I didn’t keep my composure. We hadn’t seen each other in a year. That’s the longest we’ve been away from each other since he was 5 or 6,” Grooms Sr. said. “Most of the time it was 90-120 days. So it was more difficult than normal.”

But alas, he was at midfield ready to be reunited with his son. But more importantly, he was there to see his son play a football game for the first time in high school.

As the head official made the announcement to look at each referee, Grooms Sr. quickly realized his son glanced right by him. Then, it clicked.

“I really don’t think he realized it was me initially,” he said. “He kind of skipped right by me, and did it twice. But the second time, I couldn’t help but smile and laugh. When he heard the laugh, his eyes got really wide and he realized it was me. He didn’t say anything, which was good. It was real good. His eyes and expression made it all worth it.”

As a member of the U.S. Army for 32 years in December, Grooms Sr. is used to being away from his family for lenthy priod of time.

But this moment was even more gratifying due to it being one of the longest gaps they had been separated, while the family also moved from Washington to Helena with him stationed in Kuwait.

“It was difficult,” Grooms Sr. said. “My wife and kids having to move across the country, and without me for the first time, it was difficult.”

That, however, made the embrace at midfield one of the most memorable moments of the family’s life.