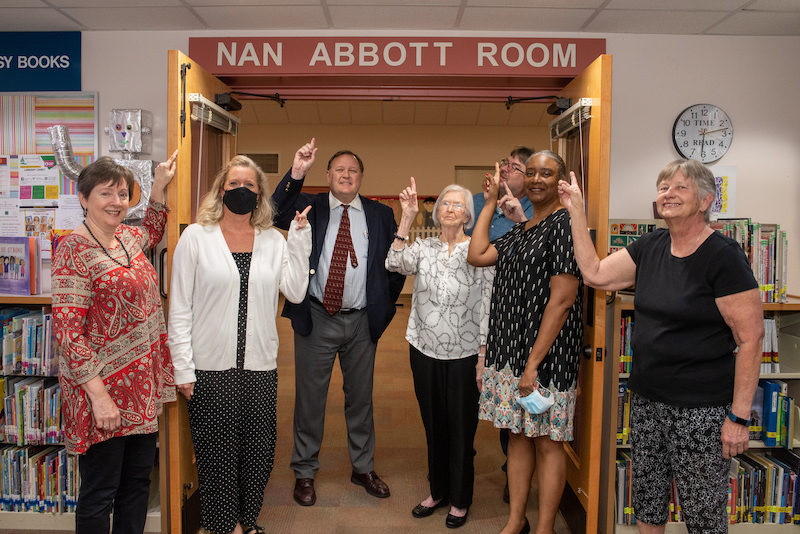 Nan Abbott was honored for her years of service at the Albert L. Scott Library in Alabaster on Oct. 13. A room-dedication celebrated her 75 years on earth and her dedication to the library. (Reporter photo/Keith McCoy)

ALABASTER – Nan Abbott, former director of the Albert L. Scott Library, was honored on Wednesday, Oct. 13, with a room dedication in the library which she had worked at for 29 years.

During the ceremony, representatives from the Friends of the Library, Board of Trustees and family reminisced and shared memories of Abbott, who died in May at the age of 75.

Friends of the Library President Judy Mosely spoke first and described Abbott as a patient and kind person, recalling her as a source of encouragement and support during the library’s most challenging times.

“She would always tell me to just be patient, the right person is going to come along. She gave me the push that I needed to always believe that we were going to be here,” Mosely said. “Nan was a friend to everybody she met, and she was just a wonderful woman.”

Abbott worked as librarian at the Albert L. Scott Library for 29 years. Nancy Hicks, chair of the library’s board of trustees, said Abbott was a hard worker and an inspiration to the library’s staff.

Hicks added that she particularly admired Abbott for her dedication to freedom of expression, specifically the principle ‘Right to Read,’ an American Library Association policy which prevents censorship and discrimination in literature.

“She was willing to stand up, as were her board members, for the ‘Right to Read,’ and that’s sometimes hard to do. But when she did it, she always did it in a way that did not anger the patron that had complained,” Hicks said. “And I really just enjoyed knowing her for nearly 30 years.”

Following the speeches, the library’s general meeting room was dedicated to Abbott, which is where programming and events are frequently hosted. The public will also be able to reserve the room as well.

As part of the ceremony, a proclamation from Mayor Scott Brakefield was also read, which officially recognized the room dedication in Abbott’s honor.

“The office of the mayor has proclaimed it is with great pleasure that we express our appreciation to Nan Thomas Abbott for her distinguished 29-year career as director of the Albert L. Scott Library, and the city of Alabaster is honored to pay tribute to Nan, who personifies the true meaning of an inspirational leader with compassion and genuine commitment to others,” the proclamation read.

The decree continued with a list of Abbott’s most notable career accomplishments, including receiving the distinguished Alabama Public Library Service Award, numerous library grants, as well as documenting her role in supervising major library renovations, which included the room that now bears her name.

Abbott’s husband, Steve, recalled first meeting his wife in the library and described the building as where their love first bloomed.

“She was very soft spoken, but had great people skills, which allowed her to do this job so well for 29 years. It was her graciousness that I think would be the best description of her. She was a gracious professional,” Steve said.

Abbott’s son, Clint Thomas, expressed his family’s appreciation of the gesture and said of the dedication that it solidifies his mother’s legacy within the Alabaster community.

“This is something that will not just be a passing thing, but will be here for a long time,” he said. “She was a good Christian woman who always tried to put God first and tried to show that example to other people and tried to be that light in a dark world.”

Abbott was a Birmingham-native and earned her undergraduate degree at Auburn University. She also held a master’s degree in library sciences from the University of Alabama.

After finishing her coursework, she went straight into the library field and never looked back, spending 40 years sharing her love of reading with the community.

Abbott joined Friends of the Albert L. Scott Library in 1991 and became a lifetime member in 2012.

Monsters, witches to take over Main Street Columbiana this…