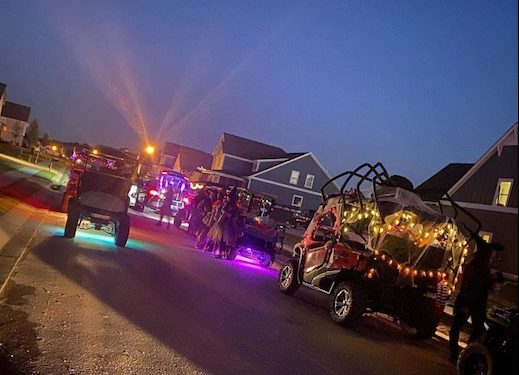 Residents of Helena’s Old Cahaba gathered for a ride through the neighborhood to celebrate the Halloween spirit. Cars and golf carts were decorated with lights, Halloween garland and other adornments as the riders threw candy to neighborhood children. (Contributed)

HELENA – “They fly at seven,” read the Facebook event information. “They” are the “witches” in the Old Cahaba Witches Ride.

On Friday evening, Oct. 22, residents of Helena’s Old Cahaba suburb flew through a successful second year of the event. Residents assembled with their cars, golf carts and bikes decked out in full Halloween gear to throw candy at neighborhood children.

The event premiered last October as a way to get the neighborhood to participate in fun Halloween activities together while also boosting morale during the COVID-19 pandemic.

The ride traveled through the length of the neighborhood, and residents came out with camping chairs to get a good seat for the festivities. There was a thrilling chill of excitement in the cool night air as everyone looked down the street in anticipation of the “witches” making their appearance.

With several houses modeling their best Halloween decorations, and several children dressed in costumes, it truly felt like the prime example of spooky season.

The ride had a large turnout of participants this year. As the cars and floats made their way through the neighborhood, there were shouts of excitement and “Happy Halloween’s” as candy flew through the air. Several cars had Halloween music like the “Ghostbusters” theme playing from their car radios. Silly string was fired in good jest at people on sidewalks, and several kids in costume jumped at the chance for free candy.

“I think it is great that these women get together every year and create some fantastic decorations on their float and vehicles,” said Councilmember Hewy Woodman. “The children are amazed by all the lights and free candy. We are so lucky to have these witch volunteers who put everyone in the holiday spirit.”