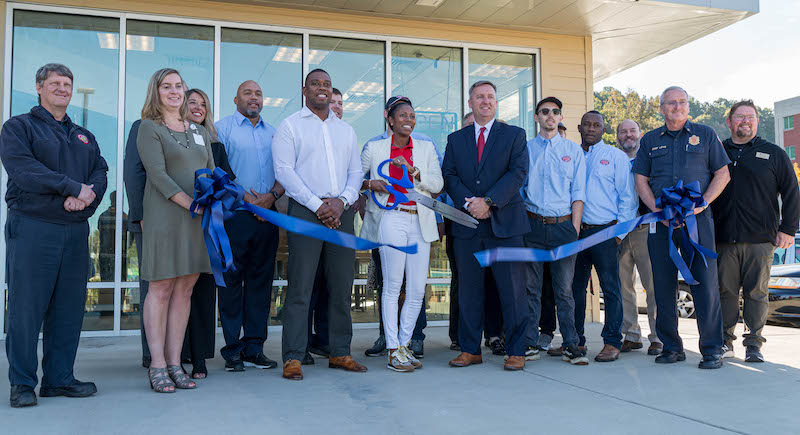 Jersey Mike’s in Alabaster officially opened its doors to the city on Wednesday, Oct. 27 after a special ribbon-cutting ceremony. (For the Reporter/Neal Wagner)

Founded in 1956, Jersey Mike’s Subs has more than 2,000 locations nationwide, and has just launched the company’s fourth restaurant location in central Alabama.

The restaurant chain christened the occasion with a ribbon-cutting ceremony among Alabaster community and city leaders at the newest store, located along the Main Street Medical Mile at 1114 First St. N.

“It is a great day for the city anytime that we can welcome a new business here,” Brakefield said. “We are super excited for you to be here in the City of Alabaster.”

Brakefield continued by saying that the new restaurant would provide residents with additional dining options as well as spur further economic development for the Alabaster region.

During the ceremony, the Crowells said they have been overwhelmed by the community support in the lead up to the restaurant’s debut, and as a result will be partnering with several local charities, including Hatching Hope in Pelham, to provide relief and recovery aid to victims of natural disasters.

“We appreciate everybody and the support that we’ve gotten from the city of Alabaster,” Kimberly said. “It has truly been a blessing. One of the reasons that we continue to create business opportunities in Alabaster is just that we strongly believe that we really are blessed to be a blessing.”

As such, the Crowells are currently holding a fundraiser from now through Friday, Oct. 29, to support Hatching Hope. Customers are encouraged to place orders through the Jersey Mike’s app using the Promo Code – HOPE50.

Each food order placed using the promotion will result in a 50-percent sales donation to Hatching Hope. Guests can place takeout orders in-store or for pickup through the company’s website or through the Jersey Mike’s app.

“Having something like a local sandwich shop where we’re just able to give back to our local communities, that’s really what we’re all about,” Kimberly said. “We partnered with Hatching Hope, which is local to Shelby County, and it was kind of meaningful to us when we were looking at different charities that we wanted to support because we know how devastating different disasters can be on people.”

The Crowells added that they were specifically called to support local disaster relief organizations due to the recent storms that have impacted the area, including Hurricane Michael in 2018 and the tornadoes that struck Shelby County earlier this year.

After opening their first Jersey Mike’s location in Tallahassee in 2010, they quickly grew to five stores within the next three years, even being awarded the honor of 2011 Rookie Franchisees of the Year.

In 2018, they were recognized for their Regional Operational Excellence at the Jersey Mike’s Subs Franchise Conference and also received the Big Bend Region’s Small Business of the Year award as part of National Small Business Week. Additionally, they were elected by their fellow franchisees to serve on the National Advisory Council for Jersey Mike’s.

The couple has 13 stores in development, including the Alabaster location and employs more than 400 people.