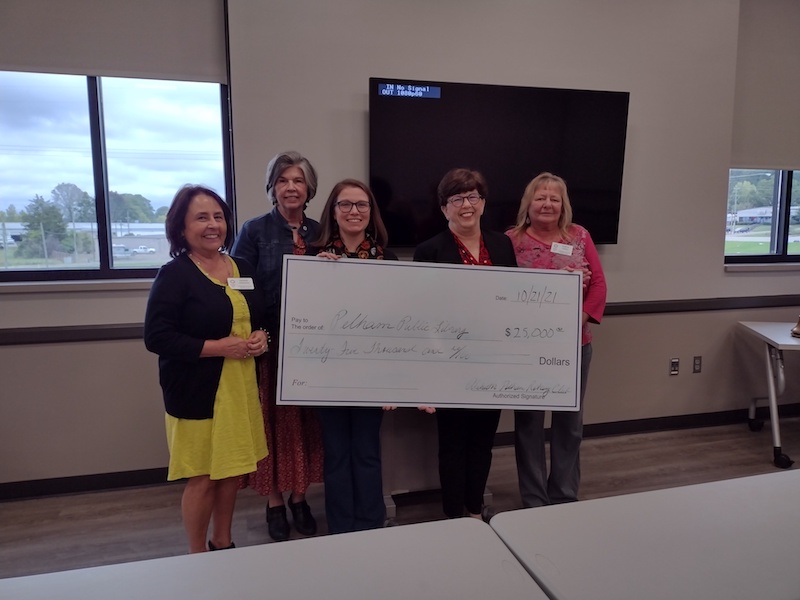 The Alabaster-Pelham Rotary Club made a generous donation to the Pelham Public Library in the total of $25,000. The donation will go towards updating the library’s computers and printers. (Contributed)

PELHAM – It’s not Christmas yet, but the Pelham Public Library was given a special gift from the Alabaster-Pelham Rotary Club on Oct. 21. The Club donated $25,000 to the library with the intent of upgrading the library’s computers and printers.

The money was raised through the Rotary Club’s annual Southern Christmas Bazaar, which has been thrown for the past seven years, excluding 2020 and 2021. Vice President of the Rotary Club Debbie Parrott said they started asking local nonprofits what specific needs they needed filled, and then they got to work.

“We actually donated $15,000 to the Community of Hope to buy a sonogram machine, and we also donated $10,000 to Backpack Buddies for some gym equipment in their new building,” Parrott said. “The $25,000 donation to the library will be used to upgrade all of the computers and printers in the library that they offer out to be used by the public.”

“The Rotary donation is going to enable us to completely replace and upgrade our patron access computers and print system,” she said. “That includes 16 computers with Microsoft licenses, two new color/black and white printers, and two pay/print release stations that will accept cash or charge. These, in addition to the 2 iMacs we were able to purchase last year with Library Services and Technology Act funds, will really bring our computer offerings to a new level.”

“We felt like the library is such a huge asset to the city of Pelham, and it’s been such a huge success since it opened,” Parrott said. “Having up-to-date computers is very important because it’s a great resource. So many patrons have used those at the library, I’ve used them myself. We were just really excited to be able to offer that to them.”

Parrott said being able to offer these types of donations to nonprofits that reflect the mission of the Rotary Club gives everyone involved a feeling of satisfaction and fulfillment.

“The money that we raised, we knew through our hard work that the community would benefit from it and that certainly has happened,” she said. “To put in place these donations and feel like we have made big things happen for a lot of different people, it is what the Rotary Clubs around the world do. These are things Rotarians think about all the time.”

“This donation allows us to keep our technology offerings up-to-date for those who need access to devices as well as the internet,” Campbell said.  “The pandemic has put into stark relief how important that access is and how stark the divide is between those who have access and those that don’t. Last year alone, our computers were used over 5,600 times.  I am so grateful to the Rotary for such a generous donation that is going to serve our community for years to come.”