Thompson, Oak Mountain to battle in rematch for spot in Class 7A semifinals 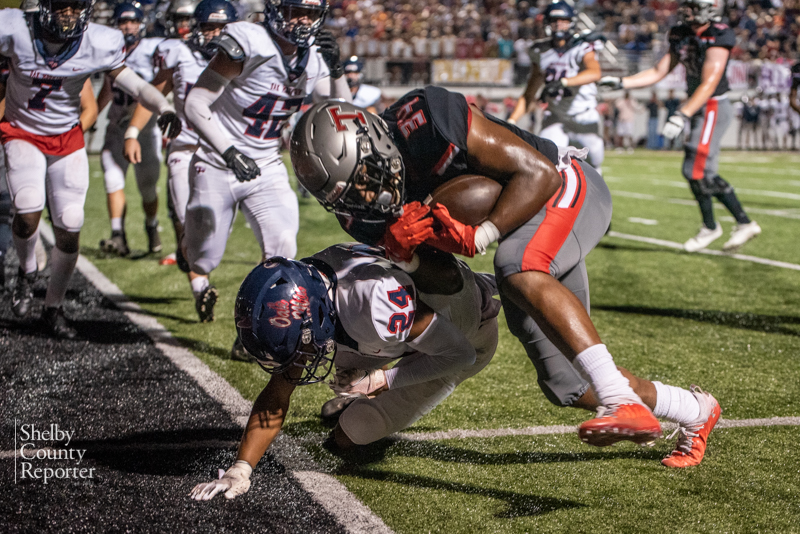 A spot in the Class 7A semifinals will be on the line when the Thompson Warriors host the Oak Mountain Eagles in a rematch of two county teams this Friday.

It’s a game the Warriors won 48-0 four weeks earlier, but a lot has changed for both teams since then.

Oak Mountain was without starting quarterback Evan Smith for the majority of that game after a late hit early in the game took him out.

Smith, however, returned last week to the tune of five touchdowns and more than 300 all-purpose yards.

Now, it’s Thompson who is dealing with an injury to starting quarterback Conner Harrell, and the Warriors are no longer undefeated as they were in that matchup due to a 24-21 loss to Hoover.

That said, it is a unit possibly even more driven than before because of that loss, and an already dangerous defense feels determined to be the difference each week.

And even if it is backup quarterback Zach Sims taking snaps at quarterback, he is coming off an 8-9 performance for 150-plus passing yards and two touchdowns in a half of football last week.

He also played well early in the second half against Hoover when he was thrown into the fire, but a couple of early drops during his time caused a loss of confidence, and Hoover capitalized on the momentum.

All that to say, Sims is still good enough to win a state championship if Harrell is out should playmakers like Justin Pegues, Ryan Peppins and Jaylen Ward continue to make plays, while Brandon Franklin can be key as a powerful running back and blocker.

And if the offense is playing well, scoring 40-plus like they’re accustom too, they’re a tough team to beat with the defensive talent they have.

A unit giving up 5.5 points per game on that side of the ball, they’re led by an array of Division I players who are difficult to prepare for at each level of the defense.

Can the Eagles come up with the game plan to somehow flip this game in their favor? That is the question.

That largely will depend on the play of the offensive line, which will be outmatched size wise, so it comes down to scheme and desire.

If they play well up front, that gives time for routes to develop for guys like Cade George and Ethan Hammett, while it gives Smith some protection and opens up holes for the run game.

That is a lot to ask for, but in the quarterfinals of the playoffs against the state’s No. 2 team that has already beaten you 48-0, it is a must.

And if you get opportunities, you have to capitalize. Oak Mountain got inside the 5-yard line twice against Thompson early in the first game, but came away with no points.

They also had a third possession start in Thompson territory that ended with no points.

Obviously, it is a team that knows field goals won’t win a game like this, but the offense has to capitalize on any opportunities they get.

One thing the Eagles can build on is Smith, who played extremely well in his return last week, and was starting to heat up with several huge plays on two consecutive drives to get the Eagles inside the 5 in the first game against the Warriors before he was injured.

He is an athlete that will play well. You can’t stop a guy like him on every play. But will he have help?

That is going to be a key. If he is asked to do it all on offense, he is going to take more big hits against a very physical defense, and while he’ll want to give it his all with his final season on the line, others will have to do the same from blocking, to receiving to running the football.

The defense also has to play better. They gave up 20 in the first quarter and 21 in the second quarter to fall behind 41-0 at the half in the first game.

This time around, the Eagles have to come out with an edge and determination to find any way they can to slow down Thompson’s offense to avoid a big deficit.

At the end of the day, those are a lot of areas that have to be perfect to make up 48 points from the first game to the second.

It is difficult to beat a team twice because of adjustments, and even more difficult to blow a team out twice, so I think this game will be closer and Smith will give it all he has for the Eagles looking for redemption.

But Thompson enters on a mission, and we’ve seen how dangerous that can be.

Both of these teams look to be top-five teams in the state when fully healthy, which should lead to a tight battle early, but the Warriors are the favorite in this one until proven otherwise.