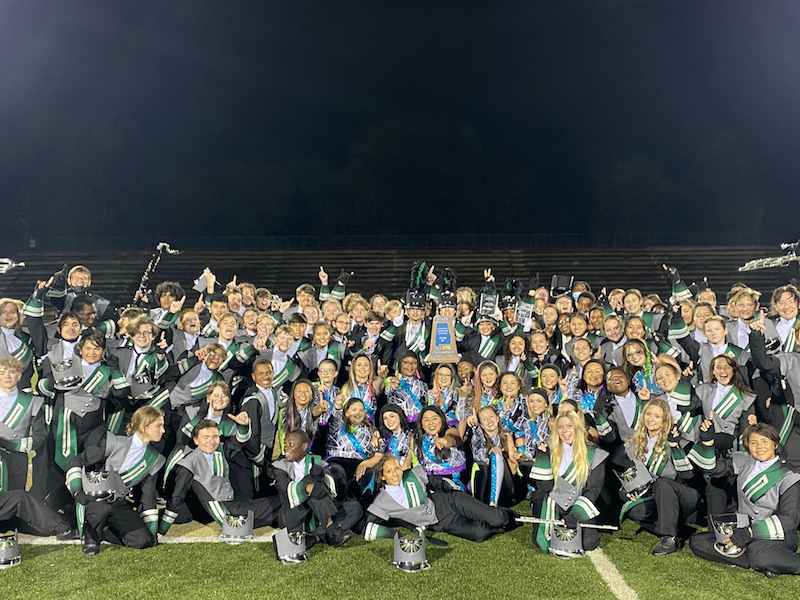 The Pelham High School Marching Band took home several awards at the Alabama Marching Championship. The Championship was held at the high school and hosted 3A, 5A and 6A band classifications. (Contributed)

Justin Ward, director of the band, said he is incredibly proud of his students for all of their hard work and dedication.

“I think it’s just a reflection of the hard work our students, parents and staff have put into everything they’ve done,” Ward said. “Our students have been working since the middle of July on this show, and they have to continue to add to it and refine it and push it all the way to the end. This is the culmination of a very long season, and to be able to push all the way to the end and work together to become one and become a unified thing, I think that is the most powerful that’s exemplified winning these awards.”

The Championship encompasses all seven band classifications of 1A-7A. It’s not affiliated with the Alabama High School Athletic Association, but they use their classifications based on the band’s size like in athletics. The competing bands perform their halftime show before judges, and are then critiqued based on their performance, technique and execution.

Pelham is a 6A school based off of its enrollment, and bands of the same school size are paired against each other in competition. Their high school band has 160 students out of the roughly 1,000 students enrolled in the school.

“It’s a much more involved activity than most people realize,” Ward said. “The time commitment to, of course, the effort and energy it takes to rehearse and practice outdoors during pretty warm months. It’s very similar to other activities you may be familiar with as far as the demand.”

Pelham’s show this year was entitled “Crossroads,” and Ward said there was a duel theme to the performance.

“We try to relate it to our students how everyday they are faced with different choices and challenges,” he said. “How they seemingly arrive at crossroads where they make one decision that’s going to impact another decision that ultimately impacts their lives. It can be stressful, it can be exciting. We wanted to relay all of the emotions they encounter at this specific point in their lives.”

The band incorporated John Lennon’s “Imagine” and Sarah Bareilles’s “Gravity” to illustrate the emotional gravity and the possible opportunities ahead of the students’ lives. Visual representation including props were used to further emphasize the artistic elements in the performance. The end result was an emotional performance that reflected a very heavy and relatable topic.

Ward said one of the best things about marching band is how it intertwines all aspects of the fine arts into one performance, and he and his students couldn’t be happier with their time on the field.

Ward said he reminds his students that the main competition is against their own standards, and that as long as they do their best, they’ve succeeded.

“If it means we’re the best band on the field that night, that’s fantastic, but if we’re the sixth or seventh best, that’s fine, too,” he said. “We’re just after getting the best out of our students. As long as we did our best, then it was a success and whatever happens with the awards happens.”