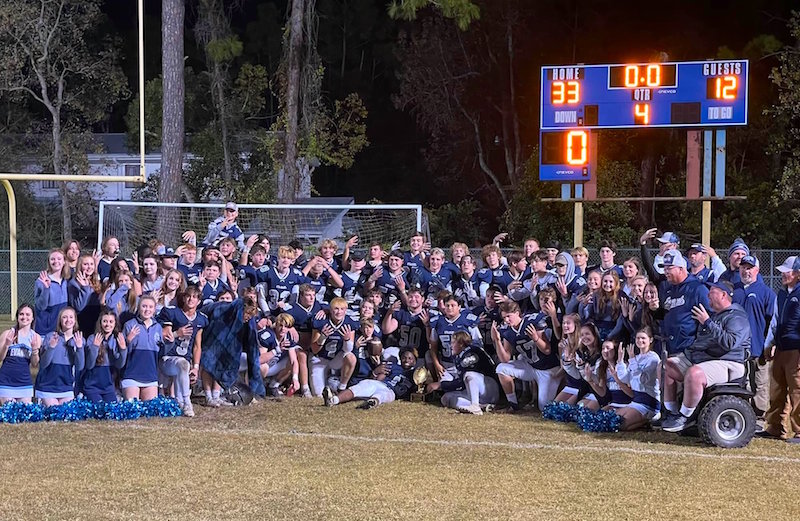 PANAMA CITY BEACH, Fla. – In a year that featured its share of ups and downs for the Evangel Lightning, the outcome looked the same as it did the last three years on Monday night, Nov. 15, as they hoisted the most coveted 8-man football trophy high in the air.

A season in which their coach was out multiple weeks battling COVID-19 in the hospital, one that saw the Lightning lose three games and other obstacles standing in the way, they never wavered en route to sweeping through the NHSA 8-Man National Tournament for the fourth consecutive year to claim the National Championship.

The Lightning opened the four-team tournament with a 51-42 win in the semifinal game against Grace Baptist out of Tennessee, avenging a 48-28 loss to the Golden Eagles in the third week of the season.

That cemented Evangel’s spot in the championship game against the Freedom Cowboys, who they beat 63-24 in the regular season. And once again, thanks to strong second and third quarters, the Lightning powered their way to victory behind a 33-14 win.

“This one’s special,” head coach Tim Smith said after the win. “This group has been through a lot, and a lot of people didn’t think we had a chance. They bought back into what we believe in here at Evangel. We told them all week, 48 minutes, everything you’ve got, every play. You can do anything for 48 minutes. They bought into it and here we are again.”

After a scoreless first quarter of the championship game, Smith reiterated to his team the message coming into the game, knowing they would be alright if they gave everything they had the rest of the way.

“We just told them to keep playing. Play as hard as we can to do everything,” Smith said of the message at the end of the first quarter. “We strive to be perfect. We know it’s not always going to be that way, but we strive for everything to be perfect. “

Sure enough, everything seemed to open up for the Lightning after that.

They struck first five minutes into the second quarter when Eli Whitfield rolled to his right and hit Kyle Jones for a 3-yard touchdown pass to make it 6-0 with 7:08 left in the half following a missed PAT.

That became the first of two touchdowns in the quarter for that duo, as the Lightning got the ball back with 3:07 left in the half.

Whitfield hit Christian Chapman on a deep downfield pass of 30 yards to set up a 20-yard strike two plays later to Jones for an easy touchdown pass. After they connected on the two-point conversion as well, the Lightning had earned a 14-0 lead going into the halftime break.

Then, the game really flipped in the Lightning’s favor.

Already up two touchdowns, they came out determined to put the game away in the first few minutes of the third quarter.

Receiving the opening kickoff to the second half, Chapman sprinted up the right side line, faked a cut back inside before getting back to the edge to finish off a 75-yard kick return to start the second half. After the extra point was good, Evangel had quickly extended the lead to 21-0 with 11:44 to play in the third.

But then came the crushing blow.

On the ensuing kickoff, the Lightning successfully attempted an onside kick to get the ball back.

It took little time at all for the Lightning to get back into the end zone thanks in large part to three big plays from Hunter Atkins. After a 5-yard run, he reeled off a 27-yard catch and a 12-yard run to set up first-and-goal from the 6-yard line.

Then, for the fourth play in a row, Atkins touched the ball once again, finishing off a strong drive with a 6-yard touchdown run to put the Lightning in front 27-0 after a missed extra point with 9:32 to play.

That gave the Lightning two touchdowns within the first 2:30 of the second half.

Freedom did answer the score, but it took until the end of the third quarter for the Cowboys to put their first points on the board, scoring with 1:38 to play in the period to make the score 27-6 going to the fourth.

Christian Chapman then put the cherry on top for Evangel early in the fourth quarter with a 25-yard touchdown run that made the score 33-6 with 10:20 to play.

Freedom went on to score one more late touchdown with 1:35 to play to bring the game to its final score of 35-12.

Chapman went on to earn the MVP of the game and the tournament after totaling four interceptions and a strong championship game featuring big plays in the passing and running game as well as the kickoff return for a touchdown.

Harris Black, Caleb Lumpkin, Whitfield and Judah Thompson were all named All-Stars of the event as well.

Smith was proud of what his team was able to accomplish in the tournament, not only for bouncing back from the three losses to bring the school its fourth national title in a row, but also because of the talent they squared off again.

With the win against Grace Baptist, Evangel not only redeemed a lopsided loss from earlier in the season, but the Lightning handed the Golden Eagles their first loss of the season.

Then, they went on to hand the Cowboys their second loss of the season, both at the hands of the Lightning.

Evangel finished the season 10-3 overall, while the Lightning also won the Division II National Championship to claim two trophies at the tournament that they’ll bring home to commemorate a special ending to a special season.