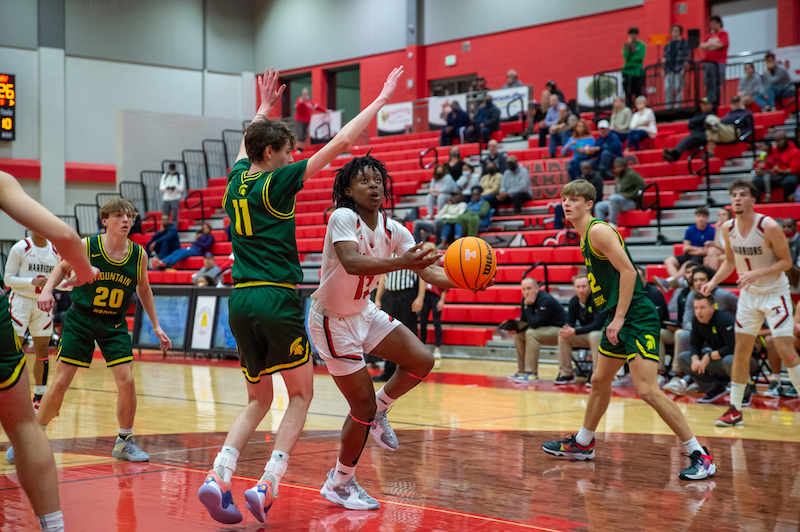 The Thompson Warriors took defending state champ Mountain Brook to the wire on Nov. 15, losing a tightly-contested game. (For the Reporter/Larry Dancy)

ALABASTER – Thompson Warriors welcomed the defending state champion Mountain Brook Spartans to Warrior Arena on Monday, Nov. 15 and put a serious scare into the Spartans leading most of the first half and keeping the contest close throughout.

However, despite a late run by the Warriors, Mountain Brook made the plays they needed to down the stretch and closed out a close win on the road, 55-51.

Thompson (1-2) was unfazed and certainly wasn’t intimidated despite hosting the 2020-21 champs. The Warriors looked strong from the jump with excellent perimeter defense and timely shooting.

They were also able to match the Spartans depth off the bench regularly rotating 10 players and looked to already be in excellent team shape.

Tre Adolphus was excellent for the Warriors, especially in the first half.

The junior scored seven of the Warriors’ 16 first-quarter points including a 3-pointer that put them up 14-10. Wes Roberson also dropped in seven points before halftime.

Mountain Brook’s Ty Davis was a thorn in Thompson’s side scoring 14 points, including a three late in the second quarter to give the Spartans their first lead of the game.

It was sophomore Masiah Robinson’s turn to help out the Warriors down 26-22 as he scored five in a row to give them the lead back.

The game, however, slowed to a crawl in the third quarter.

The Spartans turned up the defensive pressure, particularly in the half court in the second half.

Thompson was relegated to mostly shooting from the outside, only hitting two of them, and didn’t get to the free throw line as the deficit grew heading into the final frame.

Down 40-35, the Warriors had their best quarter since the opening period.

Two big buckets from Mountain Brook’s Kyle Layton gave the Spartans their biggest lead of the game at 47-39, but Thompson only allowed two more baskets the rest of the game.

Carson Pringle was big on the inside grabbing big rebounds, contesting shots and scoring on the other end.

Roberson stepped up as well, scoring eight points including two 3-pointers down the stretch.

Robinson hit a driving layup late to draw Thompson within one possession at 53-51, but the Spartans hit seven of their 10 free throws to close out the game in a raucous environment.

Roberson led Thompson with 15 points on the night with Adolphus and Pringle both scoring 11.

The Warriors will face off against the Chilton County Tigers next at home Thursday, Nov. 18 at 7 p.m.