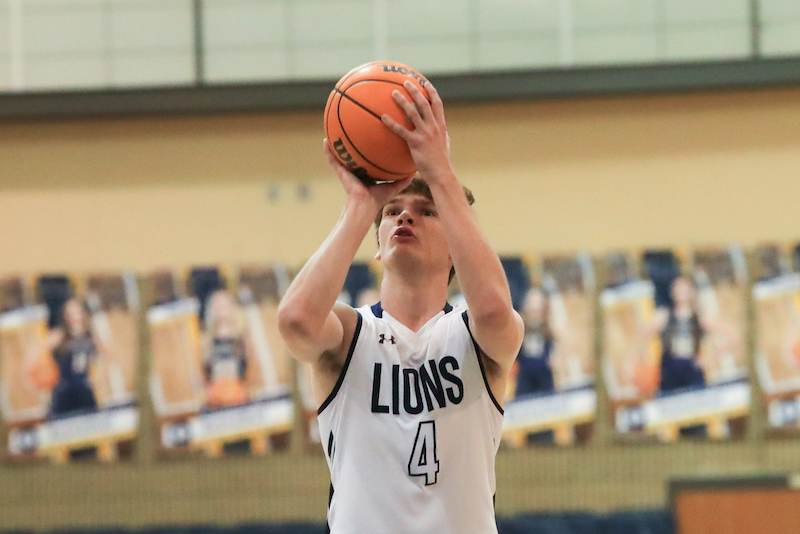 ALABASTER – A 4-4 mark from the free throw line in overtime from Miles Gilbert was to make the difference for the Briarwood Lions in a thrilling 63-57 win against county foe Calera on Wednesday, Nov. 24.

The two teams found themselves pitted against each other on the final day of the Pelham Thanksgiving tournament after splitting their first two games the previous two days, which led to the thriller between the two local 6A teams.

After battling to a 55-55 tie, which saw the Eagles fight from behind to force overtime, it was the Lions who did the damage in the extra period.

And all of their points came from the free throw line.

With Calera only knocking down one basket and the Lions gaining a lead from the line early in the quarter, the Eagles were forced to foul even more down the stretch.

The Lions capitalized with Gilbert finishing off a 21-point night with a 4-4 mark from the stripe, while they finished 8-14 from the free throw line as a team in the final quarter, including Miller Stubblefield going 2-2 for his only two points of the night.

That led to eight points for Briarwood in the extra period, while the Eagles made just one field goal and went 0-2 from the line, leading to the 63-57 victory for the Lions.

It capped off a thrilling game that saw the two teams battle back-and-forth throughout, including a tight opening quarter.

But it was the second quarter that was the best of the night for Briarwood.

The Lions posted 19 points thanks to a dominant quarter from Vizzina, who posted nine points on three field goals and a 3-4 mark from the free throw line.

He was joined in scoring by three from Gilbert and tw each from Keller, Grant Mears and Zac Lamey.

The defense also continued to play well for the Lions, as they limited Calera to 11 points.

But Xzayvion Childress had his first of two important quarters on the night by posting eight points to keep the Eagles within striking distance down 29-20 at the break.

That paid off because the Eagles came out a different team in the second half on both ends of the floor, starting with the defense in the third quarter.

Offensively, Calera only scored nine more points, all but two from Izaiha Holmes, but the defense held Briarwood to 10 points for the second time in the game to keep the game in check going to the final quarter.

They put together 26 points in the final quarter, including 12 from Childress and seven from Joe Wimberly. The Eagles also went 7-9 from the line in the period and needed every point to pull the Lions back in.

Briarwood had a solid quarter as well with 16 more points, including eight more from Gilbert and three 3-pointers as a team, but the Eagles’ 26 tied the game and forced overtime.

The Lions, however, flipped the momentum back in their favor in overtime, specifically at the line, to pull off the win.

Gilbert led Briarwood with 21 points, while Vizzina finished with 13. In all, 10 different players scored for the Lions in the win.

Childress led Calera with 22 points, while Holmes and Wimberly both posted nine.