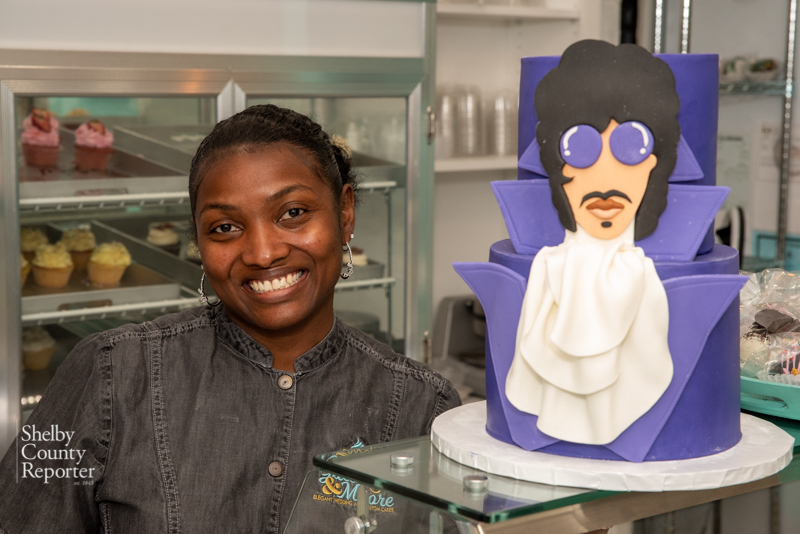 Pictured is Nedra Moore with one of her detailed cakes. Creations Galore and Moore is located at 8261 Hwy 31 Calera, AL (Reporter Photo/Keith McCoy)

CALERA – Creations Galore and Moore, a Calera-based bakery, was announced to be a finalist for the Alabama Small Business Awards presented in partnership between the Chamber of Commerce Association of Alabama (CCAA) and the Business Council of Alabama (BCA).

Nedra Moore, the founder and owner of Creations Galore and Moore, said that she was shocked when she heard the news.

“I didn’t even know that I had been nominated to even become a finalist, so that was super, super exciting,” Moore said.

In 2021, 45 small businesses from throughout the state were named finalists across four categories: Emerging, 1-10 Employees, 11-50 employees and 51-100 employees. Creations Galore and Moore is one of the 12 finalists in the Emerging category.

The finalists are judged on a variety of civic and professional standards with the winners considered to be the state’s very best small businesses.

With a successful start to her business despite opening during a pandemic and immaculately detailed cakes, it might be apparent that Moore was destined to be a baker. But the path that lead Moore into opening her bakery was not conventional.

“I have no formal training, I did not go to school for this, I was sitting at a computer running scripts and writing scripts and code, that’s what I was doing for a living,” Moore said.

Moore received her degree in Network Engineering and says that baking cakes is something she “fell into.”

While working her IT job, Moore would make cakes for family and friends, then by word of mouth, her business began to grow.
“It just got the point where I had to make a decision if I was going to continue in my career or if I was going to step out and do something new,” Moore said. “And so with the support of my husband, we just stepped out on faith and I started doing cakes full time in June of 2014.”

Take one look at any of Moore’s cakes and it’s obvious that she obsesses over details. Moore explained that her grandmother was a stickler on the idea that no matter how good food is, it doesn’t matter unless it looks good.

The importance of detail and presentation stuck with her and was only magnified when she would write scripts and code at her IT job.

“It helped train my eye for detail because in programming if one character is off, it could throw the whole thing off,” Moore said. “So I guess that’s just my way of being able to combine my career at that time with what I do here.”

But it is not just the process of making the cakes that she enjoys, although she does love helping make people’s ideas come to life, she also loves watching people enjoy their food.

“It just seems like, people are really happy when they eat,” Moore said. “It’s not very often when you see someone frowning unless their food isn’t good. But usually, food brings happiness. And wherever food is, I feel like that’s where happiness resides.”

Moore was a registered baker for some time before she decided to open her brick-and-mortar bakery in Calera.

“But he brought us so far and then, here we come to this juncture again, and it’s like you know what, he didn’t bring us this far to leave us. He would have never presented this opportunity for us if it wasn’t meant for us to keep going. So that’s what we did, we just kept going.”

As an Alabaster resident herself, Moore decided to open her store in Calera because of the community she was met with when looking at locations.

“When we came through Calera it’s just, the community, the location, everything just felt right,” Moore said. “And then the support that we got when we even showed that we had interest in this location, I don’t feel like we would’ve gotten that anywhere else.”

Calera welcomed Moore with open arms as they were excited to see progress and growth in the area, Moore explained, and it’s been that way ever since.

The winners of the Small Business Awards will be announced at the CCAA annual meeting luncheon on Thursday, Dec. 2 at the Harbert Center in Birmingham.

Creations Galore and Moore are located at 8261 Hwy 31 Calera AL and open Tuesday through Saturday from 10 a.m.-6 p.m.