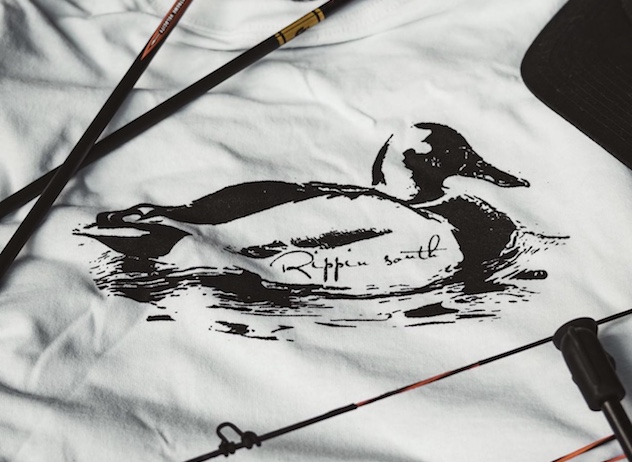 Pelham High School student Hunter Thompson is the creator and designer for Rippin’ South, a T-shirt and hat clothing line. His classmate and coworker Ryan Maxwell handles the company’s photography and graphics. (Contributed)

PELHAM – Most 17-year-old high school students are not able to say they own their own business, but Pelham High School’s Hunter Thompson is one of the few who can call themselves a teenage entrepreneur.

Thompson is the owner and creator of Rippin’ South, a clothing line of handmade hats and T-shirts. Thompson, who loves wearing hats, came up with the idea “out of the blue” one day while hanging out with his friends.

“I wear a lot of hats, and I was brainstorming ways I could start a company or do something kind of big,” he said. “It just popped in my head, why not do a clothing company?”

Rippin’ South is a brand that Thompson said represents the wild outdoors of the south. Each product is stitched with a leather patch emblazoned with outdoorsy themes like ducks or antlers. The outdoors are very important to Thompson, as he loves to hunt and fish.

Thompson and his friend/photographer Ryan Maxwell work together to make sure each item represents what Rippin’ South is all about. Thompson designed the hats based on what he wanted out of his own style, and he went to work designing something Thompson would wear himself.

“The first step was finding hats for a reasonable price, and my mom found this website where you buy bulks of hats and you can do whatever you want to them,” Thompson explained. “So, we bought the first batch of hats like that, then [Ryan and I] handstitched the first batch of all of them.”

Stitching hats by hand is no easy task, especially involving leather. Thompson loves leather, and he wanted to incorporate good quality leather into his hats. He uses his mother’s Glowforge laser machine to imprint the design into the leather and then prints out the design.

“There’s a lot of thinking and producing on what goes into it,” Thompson said. “[Maxwell] and I talk a lot about the design and how big the lettering needs to be on each batch, and the stitching also takes a lot of time.”

With his company growing, Thompson isn’t opposed to finding ways to cut some of the stitching time off.

“This last big batch we just made, my mom found a friend who has a machine to stitch hats, so I took the patches and everything to her and that saved a lot of time,” he said.

Thompson said at first his fellow classmates were skeptical that his vision would pay off, but once Rippin’ South started production, they quickly changed their minds.

“I started making hats and really putting in the grind and now everybody wants to buy them,” he said.

Rippin’ South currently has an Instagram where people can peruse its merchandise, and Thompson said he’s also working on putting up a fully-functioning website. Maxwell is the company’s photographer and graphic designer, and he works very hard to make sure all photos posted to their public forums represent the hard work Thompson puts into making Rippin’ South a reality.

Thompson is set to start at Jefferson State Community College for welding after he graduates from Pelham, and he said he wants to continue Rippin’ South into his college years, possibly forever.

When asked what he wants people to know about his company that sticks out from the crowd, Thompson kept it simple: “A young entrepreneur doing it handmade who’s putting a lot of sweat and time into it.”