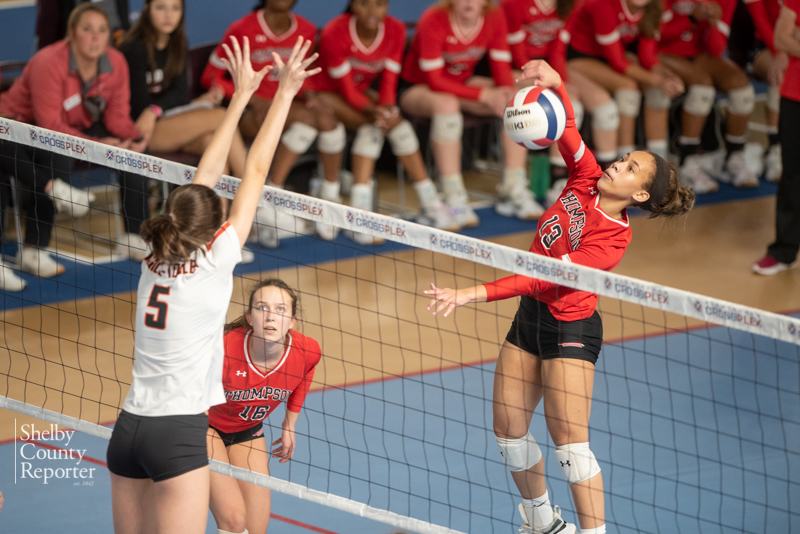 Thompson’s Bri Wilson was one of many to earn a spot on this year’s All-County volleyball team following a special 2021 season. (Reporter photo/Keith McCoy)

To no one’s surprise, it was another special season on the volleyball court across Shelby County with six teams advancing to the postseason, two making it all the way to the Final Four and one bringing home the ultimate prize of a state championship.

In a more normalized year, players showed their experience in helping their teams reach high marks.

The best of the best from the 2021 season have been named to the All-County team for their efforts.

Outside Hitter: Audrey Rothman, senior, Spain Park. This year’s Player of the Year in the county, Rothman totaled 709 kills, 249 digs, 71 blocks and 35 assists to help lead the Jaguars to their first state championship in school history. She is also the team’s all-time leader in kills with 1,858 and digs with 1,344.

Outside Hitter: Emily Breazeale, junior, Spain Park. Breazeale was spectacular this season as well, posting 484 kills for the Jags. She also led the team with 258 digs while adding 61 blocks and 38 assists.

Outside Hitter: Elizabeth Hayhurst, senior, Pelham. Pelham’s star at the net this season, Hayhurst led the Panthers with 475 kills. She also posted 119 digs, 42 blocks and 32 aces.

Outside Hitter: Bri Wilson, senior, Thompson. A stellar career for Wilson came to an end with 355 kills and 407 digs during her senior year. She also totaled 57 assists, 42 aces and 14 blocks.

Middle Hitter: Ava Nettles, junior, Shelby County. Nettles was the team leader in kills for the Wildcats with 217, while she also led the team in blocks with 31. In addition to those numbers, she posted 160 digs and 40 aces.

Setter: Madison Touhey, senior, Thompson. One of the best assisters in the county, Touhey closed out her senior season with 869 assists. She also posted 221 digs, 61 aces and 59 kills.

Setter: Kathryn Smith, senior, Oak Mountain. Smith had a strong season for the Eagles, finishing with 702 assists and 158 digs. She also finished with 65 kills and 63 aces. She surpassed 1,000 career assists during her career as well.

Libero: Anna Sartin, senior, Chelsea. Sartin finished second in the county this season with 469 digs, while she added 87 aces and 75 assists to lead the Hornets.

Libero: Brooklyn Allison, junior, Spain Park. A balanced player for the Jags, Allison’s 386 digs, 75 assists and 31 aces were key in helping them claim the state championship.

Outside Hitter: Emma Pohlmann, junior, Chelsea. Pholmann totaled 380 kills and 322 digs in a balanced effort for Chelsea this season. On the floor the entire match most nights, she added 79 aces, 31 blocks and nine assists.

Outside Hitter: Jayni Thompson, senior, Oak Mountain. The leader at the net for the Eagles, Thompson posted 361 kills during her final season. She added 68 digs, 62 blocks, 28 aces and eight assists.

Outside Hitter: Madison Wood, sophomore, Shelby County. Wood led the Wildcats with 427 assists, 192 digs and 71 aces as a sophomore. She also added 141 kills to an impressive stat line.

Outside Hitter: Addison Dockery, freshman, Helena. Another young star for the Huskies, Dockery totaled 262 kills and 70 aces to lead the Huskies this season. She also finished second on the team with 323 digs.

Middle Hitter: Stella Helms, sophomore, Briarwood. A spotlight for the Lions, Helms was consistent across the board this year as a promising playmaker for the future.

Setter: Haley Thompson, junior, Spain Park. With 150 assists, 45 digs and 39 aces, Thompson’s impact on the Jags this season was important in them claiming the title.

Libero: Tammy Melendez, senior, Pelham. Melendez led the Panthers with 385 digs this season and finished second on the team in both assists and aces with 88 and 68, respectively.

Libero: Presley Lively, sophomore, Helena. The county’s leader in digs, Lively posted 576 during her sophomore season, setting up a bright future with the Huskies.