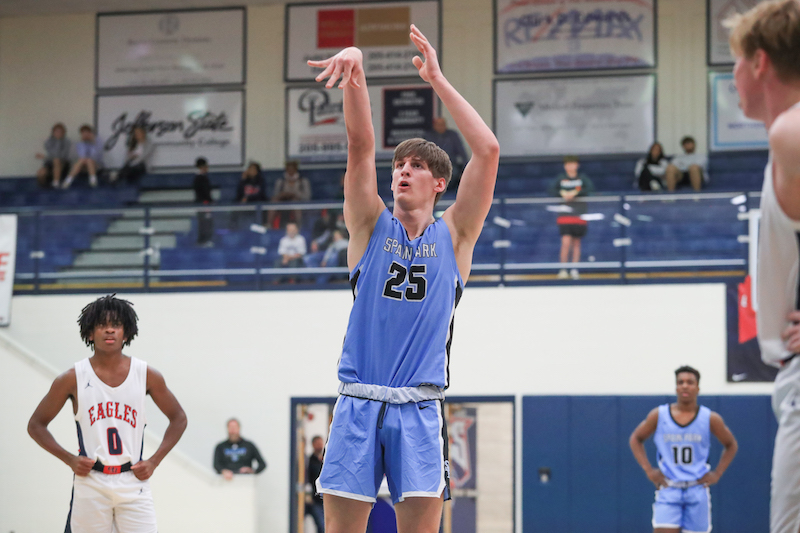 PINSON – A combined 22 points in the final quarter seemed like an outbreak offensively in an otherwise defensive battle on Tuesday night, Nov. 30 between Spain Park and Clay-Chalkville.

The visiting Jaguars, however, used their steady defensive play and did just enough offensively to continue an impressive stretch of play with six consecutive wins since a one-point loss to Grissom to open the season.

With the low-scoring affair, the matchup was tightly contested and came down to the final seconds, as the Jags had to fend off a comeback from Clay.

With seven seconds left in the game, and Spain Park up 31-30, Hunter Herritt drained two crucial free throws to make it a three-point game.

That forced the Cougars to attempt a shot from beyond the arc at the buzzer, and a good look bounced off the front of the rim, leading to a Spain Park win.

It was an exciting finish to a slower game through the first three quarters.

In the opening three quarters, the two teams limited one another to single digits on the offensive end of the floor, with good looks tough to come by.

The Jags, however, started an impressive first two quarters defensively by giving up five points.

That was enough for Spain Park to grab an early 8-5 lead at the end of the opening period.

In an almost identical second quarter, the Jags held the Cougars to six points, while the offense replicated its first quarter with eight more points to extend the advantage to 16-11 going into the halftime break.

The two teams stuck with the same game plan coming out in the second half, as the two matched each other with seven points.

That was enough to help the Jaguars maintain a five-point, 23-18 advantage going to the final quarter.

For the first time, it looked as if the offenses had found ways to get cleaner looks in the fourth quarter as the two battled down to the wire for the win.

Clay scored a game-high 12 points in the frame, but Spain Park also reached double digits for the first time thanks to the late free throws from Herritt, which became enough to close out the 33-30 win.

Colin Turner led Spain Park with 14 points and an important 15 rebounds for another double-double early in the season, while Zach Gray had eight points and the team’s only two 3-pointers. Herritt and Chase James each finished with four points.