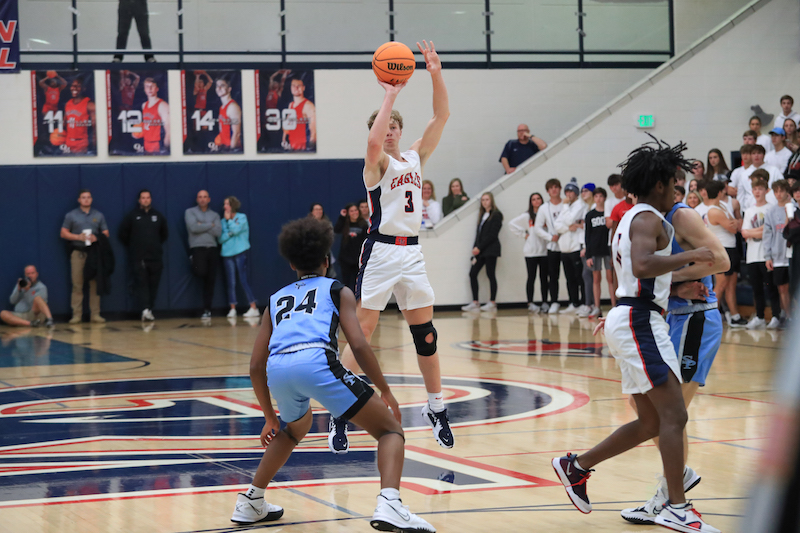 Three scorers in double figures, including 18 from Brady Dunn, helped Oak Mountain pull away for a 10-point victory against Hewitt-Trussville on Nov. 30. (For the Reporter/Dawn Harrison)

Dunn has come out firing on all cylinders early in the season, scoring in double figures in all but one of Oak Mountain’s first seven games, including 18 or more in three of the last four games.

Taking on the Huskies on Tuesday night, he totaled 18 alongside six rebounds to help lead the Eagles to a 68-58 victory.

All three stepped up big in the second half as well, as they helped Oak Mountain overcome a 28-25 halftime deficit.

The Huskies came out strong on the offensive end with an 18-point opening quarter.

They actually trailed 11-6 early in the frame, but a 12-2 run to end the quarter put them in front by five going to the second period.

Oak Mountain, however, responded early in the second quarter. Back to back made shots from beyond the arc, a layup and a jumper gave the Eagles an 11-0 run and a 23-18 lead.

In a quarter of runs, however, Hewitt responded with an 8-0 run to reclaim a five-point advantage before a jumper late in the quarter made it a 28-25 game at the half.

It led to a high-powered next two quarters starting with a 20-point third quarter.

The Eagles hit a 3-pointer out of the gate and never looked back en route to a 20-11 period that gave them a 45-39 advantage going to the final quarter of play.

After the Eagles opened up a 13-point lead early in the final quarter, Hewitt-Trussville responded with another run to get as close as five points.

The Eagles, however, had gained too much offensive traction, as they pulled in front by 17 points before the Huskies battled back to get within 10 as the final buzzer sounded.

With the win, Oak Mountain improved to 5-2 on the season.