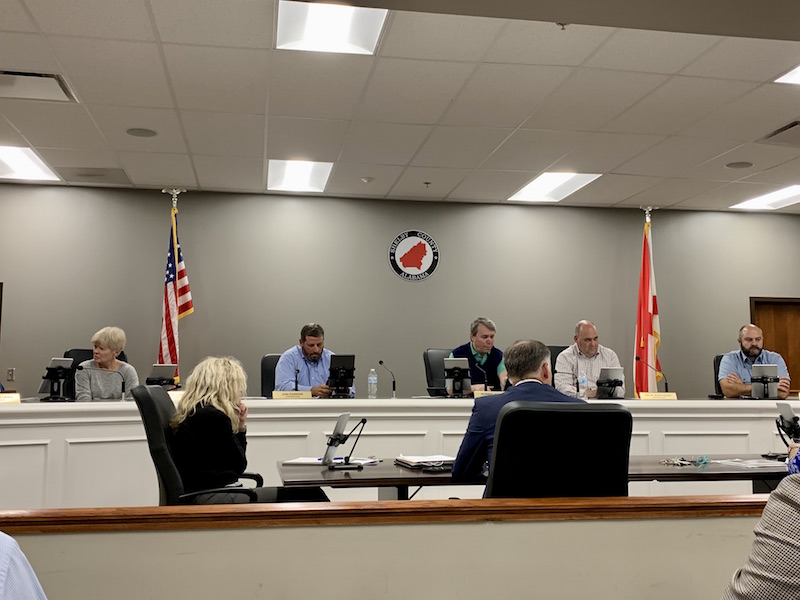 The Shelby County Commission voted on Nov. 22 to refer a case involving the use of a home in the Meadowbrook neighborhood as an Airbnb to the county attorney for consideration. (Reporter Photo/Emily Sparacino)

COLUMBIANA – A case involving the operation of an Airbnb in the Meadowbrook neighborhood in Shelby County has been referred to the county attorney for consideration.

The Shelby County Commission voted on Monday, Nov. 22 to refer the case to the county attorney “for legal action to enforce the zoning regulations,” the resolution reads.

The case originally appeared on the Shelby County Planning Commission’s Nov. 15 meeting agenda as a zoning violation enforcement action concerning the operation of a rooming house or short-term rental in a single-family home located at 3605 Cumberland Trace in Meadowbrook, a residential neighborhood zoned Special District in unincorporated Shelby County.

The Planning Commission voted on Nov. 15 to refer the case to the County Commission “for consideration of the referral to the county attorney for legal action to enforce the zoning ordinance.”

The home is the estate of the late Alice Hare, who died in March 2021, and the estate is controlled by her four sons with Crosby O’Hare acting as executor of the estate.

During the public comment portion of the County Commission meeting, Birmingham attorney James Harris, who represents the Hare family and estate, said the zoning code does not support an action against the estate regarding its use as an Airbnb.

“We should have the expectation that it can be used in accordance with your zoning code,” Harris said. “That means that people can rent their houses out. What they can’t do is rent rooms out to three or more people that are not of the same family.

“My folks initially, admittedly, rented to some groups, the groups had lots of cars and they made noise, they did things that lawful persons in the neighborhood can do, but they also in this instance shouldn’t have been there and shouldn’t have done it. My folks have changed their listings and committed to renting only to families.”

Harris said Meadowbrook neighbors have brought a lawsuit based on public nuisance, zoning and violation of covenants related to groups that have stayed at the home.

“We don’t need a second lawsuit that also works against what hundreds of citizens in this county are doing already,” he said. “I would urge you, leave this as it is. It’s a neighborhood squabble. It’s neighbors that don’t like what’s happening, but it’s not against your zoning code.”

Meadowbrook resident Johnny Padgett said he represented a large number of the neighborhood’s residents in expressing concerns about the home being used as an Airbnb and being rented to groups that are not families.

“This is not a one- or two-person squabble,” Padgett said. “This is about our collective rights as homeowners.”

Padgett said even though the home’s owners might intend to rent out the home only to families, they cannot ensure that renters do not bring people with them who are not family members.

In other business, the County Commission approved a resolution supporting Shelby County Sheriff John Samaniego, his office and their efforts to keep citizens safe by opposing any proposed state legislation “that would remove or further restrict the sheriff’s discretion on issuing pistol permits and/or weaken the sheriff’s ability to provide for the safety and welfare of all county citizens, residents and visitors.”

“Right now, as it stands, people that wish to wear a firearm on their person concealed must come and get a permit, and they are vetted through the Sheriff’s Office,” Samaniego said. “For public safety, we need to keep this in place.”

“Our sheriff does a good job with reinvesting those funds back into his employees,” County Manager Chad Scroggins said, noting the funds are used for training and officers’ equipment. “We want to keep the discretion and power of the sheriff to help with that vetting of those who are applying for the pistol permit.”