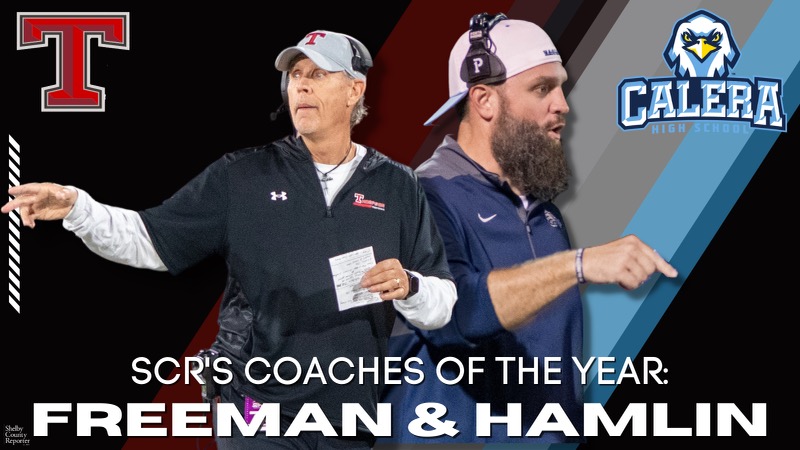 Thompson's Mark Freeman and Calera's Jason Hamlin share this year's Coach of the Year honor in Shelby County after historic seasons for their respective schools. (File)

With nine teams making the playoffs for the first time ever in Shelby County, the 2021 high school football season was a memorable one.

It not only shows the commitment of the players, but it shows the array of successful coaches the county has, which may be the best collective group of coaches any county has.

You look at the job of first-year head coaches Tyler Crane and Zeb Ellison at Oak Mountain and Shelby County, respectively, and the success they had in getting their teams to the playoffs, while Briarwood’s Matthew Forester led the Lions to the second round of the playoffs for the second year in a row in the 6A classification despite one of the state’s most challenging schedules.

Beyond that, Richie Busby led the Helena Huskies to their second region championship in three years and third top-two finish in a row with their highest ranking in school history, while Tom Causey at Pelham led the Panthers to a top-two finish after winning the region title last year.

Then, to see Chelsea head coach Dustin Goodwin keep his team believing en route to chasing down a playoff spot despite one of the most difficult schedules in the state, while Montevallo head coach Blake Boren has now led the Bulldogs to the playoffs in his first two years with a combined record of 15-8.

But when it came to this year’s Coach of the Year award, as great of a job as all of those coaches did, the jobs Calera head coach Jason Hamlin and Thompson head coach Mark Freeman did were second to none.

Both led their team to historical seasons, which made it too difficult to separate the two, giving them a share of the 2021 Shelby County Coach of the Year honor.

Freeman, who just wrapped up his seventh season leading the Warriors, led his team to a third consecutive state championship this season, becoming the first coach in Class 7A to do so.

In his last five seasons, he has finished no worse than 11-2 and is a combined 62-5 in that span with a playoff record of 17-2. Thompson has beaten Central-Phenix City twice and Auburn once to claim the three consecutive state championships, which became the first since 1982.

The Warriors were also on a 27-game win streak dating back to 2019 before Hoover beat them during the regular season this year.

After taking over a 0-10 team going into his first season in 2015, he led Thompson to back-to-back five-win seasons before a five-year stretch of leading the Warriors to at least the semifinals began.

Thompson has now been to four consecutive state championships, winning the last three.

In his career, Freeman now has five titles in the AHSAA and four more in the AISA leading Bessemer Academy, Spanish Fort and Thompson all to state championships.

Hamlin, however, is on the other end of the spectrum, just getting his start as a head coach.

And if year one is any sign, he is headed in a very good direction.

Taking over a team that had won just one game each of the three previous years in head-to-head matchups, two additional wins in 2020 due to COVID forfeits, Hamlin immediately made a difference.

He stepped in and quickly made a difference by leading the Eagles to a victory against Demopolis in the opening game of the season for the first time in school history.

Not only did it mark a winning start to his tenure and Calera’s season, but the Eagles’ first home win since the 2017 season.

He went on to lead Calera to a 4-2 start, while the Eagles went on to finish the regular season with seven wins and a 7-3 record before falling by just 10 points to Spanish Fort in a 41-31 game in the opening round of the playoffs.

It marked Calera’s first time winning more than one game in the 6A classification, which led to the team’s first playoff spot in the classification as well.

Not only that, but the Eagles were a combined 14 points from winning the region championship with a four-point loss to Pelham and a 10-point loss to Helena, leading both of those teams in the second half.

It was a remarkable first-year effort, especially considering it was his first time leading a team as a head coach. His players bought in, the wins followed, and the community felt the excitement because of it.

The two coaching jobs will go down as memorable for each, while the entire county should feel good about the hands they are in moving forward.

Congratulations to both head coaches on their achievements this season.