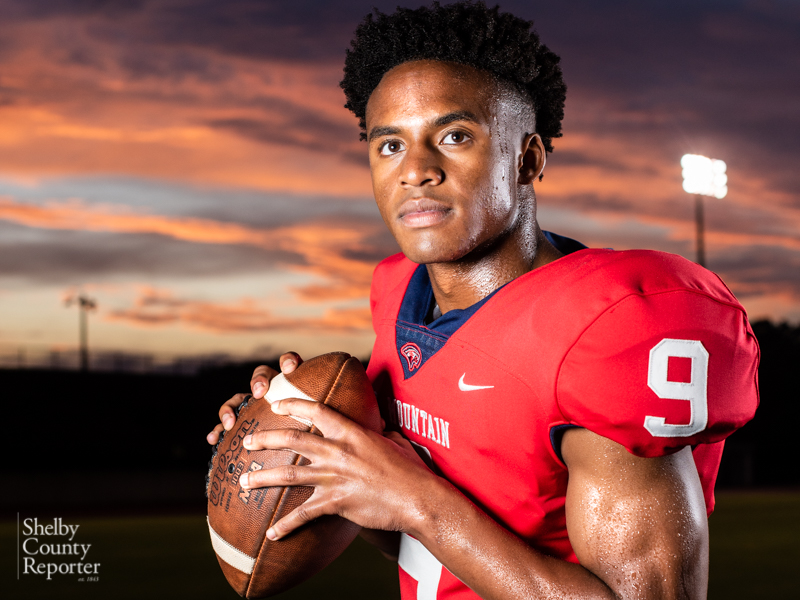 Evan Smith closed out a special high school career as a four-year starter by being named this year's Player of the Year following a remarkable senior season. (Reporter photo/Keith McCoy)

It could have come down to a roll of the dice to determine this year’s Player of the Year in Shelby County.

A total of seven athletes were neck-and-neck, and there really wasn’t any separation between any of them because of what they meant to their respective teams as seven of the state’s top players.

When you look at what Conner Harrell, Ryan Peppins, Jeremiah Alexander, Peter Woods, Evan Smith, Kobe Prentice and Joseph Anderson did for their teams, you can’t help but be inspired.

But it was what one didn’t do that earned him Player of the Year.

As I sat down to determine the top player between those seven, it took hours and hours to narrow it down to two, and then even more time to make the decision between those final two players.

Ultimately, however, it came down to who meant the absolute most to their team, and that was Smith at Oak Mountain.

The deciding factor ultimately came down to what happened when Smith was injured early in a matchup with Thompson.

Through the first seven games, Oak Mountain sat at 6-1 overall and was scoring an average of 30.1 points per game.

The only loss came in a 28-21 loss to Hoover, who ended the season No. 1. In that game, he showed he could help the Eagles compete with one of the top-two teams in the state, scoring all three of his team’s touchdowns and totaling 209 of his team’s 315 yards.

Early in the game against Thompson, who was No. 1 at the time of the meeting and went on to win the state championship, Smith went down with an injury.

For the remainder of that game and the next two weeks, the Eagles scored one combined touchdown, losing to the Warriors, Hewitt-Trussville and Clay-Chalkville by a combined score of 124-7.

Then, Smith arrived back in the lineup for the first round, and all he did was lead his team to a 38-35 win against No. 5 James Clemens for a spot in the Class 7A quarterfinals.

In that win, he totaled 182 passing yards and 246 rushing yards with his second five-touchdown game of the season. It also marked the first time in school history the Eagles had made it to the second round in back-to-back seasons with Smith leading the way both years.

That performance alone, after three weeks of scoring just seven points, showed what he meant to his team and earned him this year’s Player of the Year award in Shelby County.

He stepped back in, and the team didn’t skip a beat, picking up right where they left off when he went down with an injury, which saw him drive Oak Mountain inside the 5-yard line twice against Thompson’s historic defense.

For his team to rally around him like that not only showed his leadership, but showed how much he meant to his teammates. When he was on the field, they believed they could challenge anybody.

He did all of that in nine games, missing three, and with every opponent knowing focusing on shutting him down was the key to beating Oak Mountain.

But Smith wouldn’t hesitate to share this award with others, and the other six finalists put together seasons that stat wise and leadership wise that was impressive.

Harrell was the other finalist, and his courage to battle through a broken thumb late in the season, come back in the state championship from a leg injury and still lead his team to a state championship was remarkable, and he is just as worthy of being recognized.

He totaled 3,126 yards passing, which almost neared last year’s Gatorade Player of the Year total despite the obstacles, while he also threw for 47 touchdowns. In addition to that, he ran for 405 yards, which topped last year, and he totaled five additional rushing touchdowns.

That gives Peppins the ninth most receiving yards in state history.

And you can’t put a list of the best players together without looking at two defenders from Thompson’s historic defense.

Alexander, last year’s Player of the Year, was even better at getting in the backfield during his senior season, finishing with 28 tackles for loss and 70.5 tackles.

Peter Woods was just as ferocious for the Warriors, as the top player in Alabama for next year’s class totaled 28.5 tackles for loss 71 total tackles.

That duo, which we may see together at the college level as well, was the most dangerous in the state offensively or defensively.

And then, all Kobe Prentice did at Calera was make jaw-dropping play after jaw-dropping play. Not only a downfield threat with great hands, he was possibly the most difficult player to bring down after the catch this season.

The Alabama commit finished the season with 1,231 receiving yards and 18 touchdowns on 69 receptions for an average of 17.8 yards per catch.

That brings me to Joseph Anderson, who many don’t realize is now the all-time leader in rushing yards in the county’s history. The Montevallo running back totaled 2,346 yards on the ground this season on 243 carries.

His yardage total is now the 38th best mark in the state’s history, while he also totaled 29 touchdowns.

If you had to sit down and choose between those seven after watching them for at least two years, you may choose differently, but it wouldn’t have been easy. To that, the credit goes to each of the seven players who poured in so much work to not only become the top players in the county, but the state.