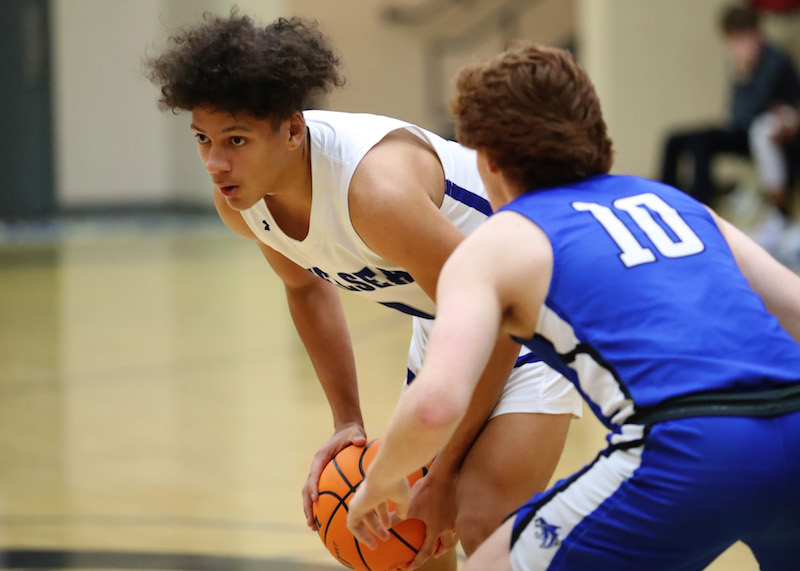 Avery Futch, above, totaled 22 points to lead Chelsea to an67-57 upset victory against No. 2 Mountain Brook on Friday, Jan. 14. (For the Reporter/Cari Dean)

CHELSEA – When they faced adversity after leading the majority of the game, Chelsea didn’t bat an eye despite powerhouse Mountain Brook on the other side.

The Hornets fell behind 53-52 early in the final quarter, in a moment it looked like momentum had flipped, but they didn’t break against the No. 2 Spartans.

Instead, Chelsea followed that brief loss of the lead with a dominant 15-4 run down the stretch to pull away and pick up one of the biggest wins in recent history with a 67-57 victory.

Coming off a 10-point loss to Homewood to fall to 1-1 in area play, the Hornets spent two days of practice shifting their attention to Mountain Brook and preparing for their full-court press and athletes.

With different methods at practice, it paid off, as Chelsea came out with a fast start.

They helped play a part in a 17-point start on the offensive end for the Hornets, but Mountain Brook’s Kyle Layton did his best to keep the Spartans within striking distance early.

In the opening quarter, he knocked down three 3-pointers plus an and-1 for nine of the Spartan’s 12 points in the period.

Still, Chelsea was able to take a five-point lead at the end of one.

The second quarter became more of a free throw shooting fest for the Hornets, but that didn’t seem to bother them.

After going 3-5 in the opening quarter, Chelsea earned 14 free throw attempts in the second quarter, making 10 of them.

That was the start of a big two-quarter stretch at the line for the Hornets.

It helped them total 18 more points in the second quarter, including five more from Futch, four from Alex Redd, three from Carson Camper and two each from Lanzi and MJ Conrad.

Still, Layton did what he could to help his team. After being held to four points for the majority of the quarter, the junior guard threw up a lengthy shot at the buzzer for the Spartans that found the bottom of the net to take what was a 35-23 game and make it a nine-point game at the break.

Coming out of the break, Chelsea placed an emphasis on trying to shut down Layton, which paid off. The Hornets held him scoreless in the third quarter, which was important as others for the Spartans started to find a rhythm.

Mountain Brook totaled 15 points in the quarter of the game to continue a climb back.

Chelsea, however, remained hot at the free throw line.

The Spartans had no answer for Aiden Owens, who fought through contact much of the quarter.

He made four of his five free throws in the quarter and totaled six points, while the Hornets went 6-8 from the line in the period and totaled 14 more points. Between the second and third quarters, Chelsea went 16-21 from the free throw line.

That helped the Hornets take a 49-41 lead into the final quarter of play.

Mountain Brook, however, had only lost two games all year and wasn’t ready for a third without a fight.

The Spartans started the final quarter on a 12-3 run, completely shifting the momentum into their favor after fighting back all game.

But during a timeout, Baumbaugh told his guys that Mountain Brook expected to win the game because that’s just what the Spartans do. He challenged his guys to step up, and they did just that.

The Hornets weren’t as sharp from the free throw line in the quarter, missing seven of their 10 attempts, but Futch made the difference by finding a rhythm with his shot again.

He had nine points down the stretch on three made field goals and one 3-pointer, while Lanzi drained three of his four free throws in the quarter to help Chelsea finish the game on a 15-4 run.

Cooper Griffin also had two big baskets in the quarter that helped keep the Spartans from stealing back late momentum, as Chelsea fended them off for a 10-point win.

Futch led the Hornets with 22 points in the win, while Lanzi added 14 and Owens 12 to give them three in double figures. Beyond that, Camper chipped in seven points and Griffin six.

Layton led Mountain Brook with 20 points in the loss.

Chelsea’s next area game will be a rematch against Homewood on Friday, Jan. 21, while they’ll play Central-Tuscaloosa on the road on Monday.

Pelham girls grab 2nd 30-plus point win in a…