Dunaway, Brooks, Watts among those inducted into 2022 UM Athletics Hall of Fame 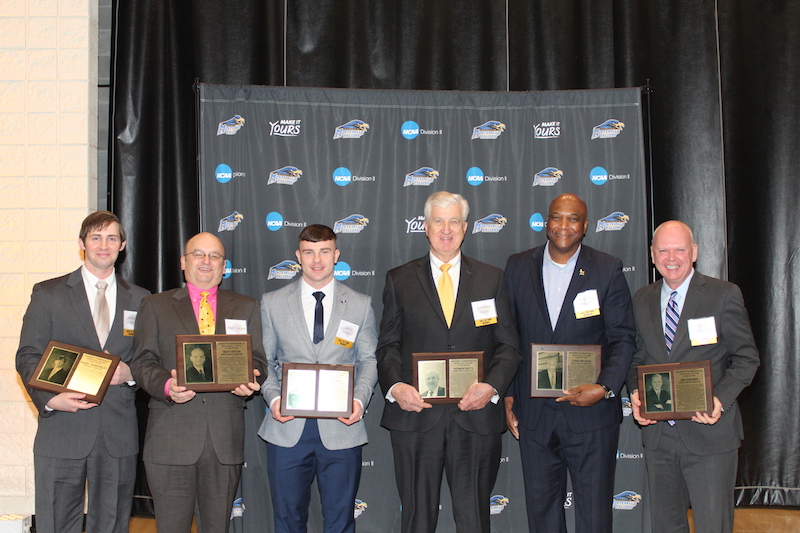 The University of Montevallo's Athletics Hall of Fame Class of 2022 featured several graduates who made a life in Shelby County. (Contributed/UM Athletics)

MONTEVALLO – On Friday, Jan. 28, six graduates of the University of Montevallo received a special honor at the McChesney Student Activity Center’s Trustmark Arena, including three who have called Shelby County home outside of their college days in Montevallo.

Gathered in front of family and friends, Lewis Brooks, Jim Dunaway, Herman Watts, Matthew Orton, Gary O’Neill and Daniel Tankersley were all inducted into the University of Montevallo Athletics Hall of Fame for the class of 2022.

Brooks, Dunaway and Watts have all spent extended periods of time in the county outside of their time as a Falcon as well, making impacts on many.

Most recognize Brooks as the current superintendent of Shelby County Schools, but he was also a star basketball player for the Falcons in the 80s.

Between 1984 and 1988, he put his name in the Montevallo record book thanks to his three-point field goal percentage of .434, which still ranks second in school history.

After his time on the hardwood, however, he turned his attention to education. Since then, he has worked for three decades as a teacher, coach, assistant principal, principal, elementary and middle school coordinator and assistant superintendent before becoming the new SCS superintendent.

He has also called Shelby County home for the majority of his life since attending Montevallo.

He was also recognized by the National School Public Relations Association in 2020 as a “Superintendent to Watch.” Brooks was instrumental in the creation of the Rob Spivery Endowed Scholarship to assist fifth-year members of the men’s basketball program with scholarships.

Dunaway has also had a life filled locally, growing up in Alabaster before attending The University of Montevallo.

After graduating, Dunaway made a splash in the broadcasting world, working in both television and radio.

In his time as a broadcaster, he has earned two Southern Regional Emmy Awards with NBC 13 and an Associated Press Award for Alabama Sportscaster of the Year at CBS 42, where he also earned several other awards for his work.

Many, however, know Dunaway for his work in radio. Previously of The Roundtable on WJOX, he and his partners Ryan Brown and Lance Taylor recently ventured into the podcast/streaming world by creating Double Down Media, which led to their new show called The Next Round.

He has won multiple Alabama Sportscaster of the Year awards from the National Sports Media Association for his work in both radio and TV.

Watts also had a major impact locally after graduating from Montevallo.

A former basketball star for the Falcons from 1968-1970, he was team captain and helped lead the school to its first winning season during his senior year.

He also doubled down by playing infield for the baseball team.

After graduating, Watts coached football and basketball at three stops in the county, including Calera, Pelham and Thompson.

He is also the father of former Pelham and Alabama quarterback Tyler Watts.

Watts’s main career, however, has been with ALFA Insurance Companies, where he started in 1978. He eventually earned the Manager of the Year award 15 years in a row and was named the Executive Vice President of Marketing in 2006.

He has also served nine years on the University of Montevallo Foundation Board and gave the commencement address to the 2011 summer graduating class.

Tankersley played baseball for the Falcons from 2006-2007.

Orton spent his time at Montevallo as a visual contributor to the university through is photography skills. He served as Director of Photography for UM athletics from 1991-2014.

For more than two decades, he (and his office) provided an extensive portfolio of athletic pictures (action and portrait) of all UM athletic teams.

Orton, like the others, won several awards during his time at Montevallo.