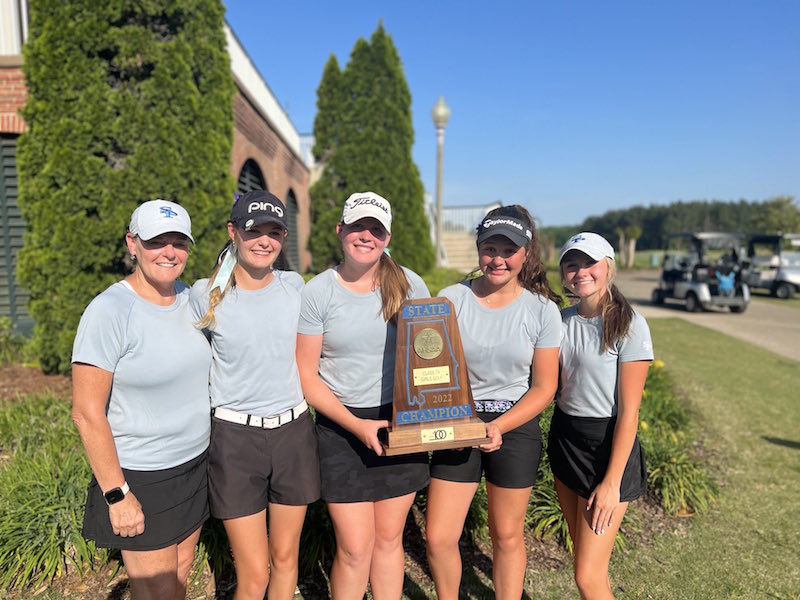 HUNTSVILLE – Looking to defend their 2021 State Championship, the Spain Park girls golf team was forced to overcome a day-one deficit at the 2022 tournament on Tuesday, May 10.

After a day-one total of 233 and 17-over par on Monday, the Jaguars found themselves trailing Huntsville by four shots going into the final round on Tuesday.

But with familiar faces from a thrilling win at last year’s championship, the Jags didn’t panic in the face of pressure.

Not only did the team improve its score in round two, but the Jaguars improved by 14 strokes to storm back.

They ultimately ended up needing every one of those strokes, as that brought them to an even tie with Huntsville at a two-day aggregate score of 452.

With a tie, the champion came down to which team had the best score from their No. 4 scorer.

After an opening-day 79, she came back with a final-round score of 76 to finish in a tie for ninth.

Johnson finished with a two-day aggregate of 155, while Maher finished at 158 in 12th.

Johnson’s score, which included a closing birdie on the 18th hole after triple bogeying the 17th, became the deciding factor in Spain Park claiming the 2022 title and repeating as Class 7A champs.

Trible had the highest finish for the Jags thanks to rounds of 75, which earned her a two-day total of 152 and 6-over par.

The winner of the individual portion of the tournament was Hewitt-Trussville’s Molly Davidson with an impressive back-to-back rounds of 70.

McCrackin wasn’t too far behind her teammate, using rounds of 79 and 73 to finish at 8-over par and in a tie for seventh.

While Trible was consistent with her back-to-back rounds of 75, McCrackin improved her second-round score by six strokes to help play a key role in the Jags winning the title.