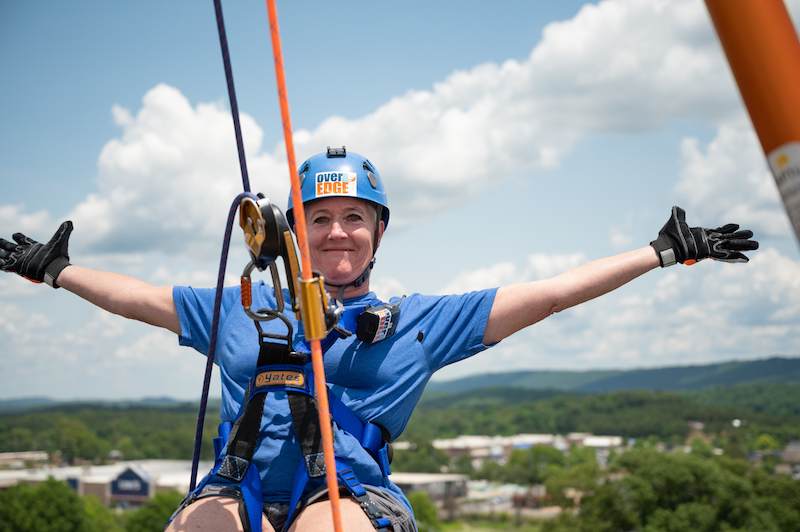 Those who participated in Over the Edge rappelled down the side of McLeod Software in support of aging out foster care children. (Contributed/William Yarbrough, TooWayMedia)

BIRMINGHAM—Local celebrities and other generous individuals went over the edge—literally—on Friday and Saturday, May 13-14 as they rappelled more than seven stories down the side of McLeod Software in support of Alabaster-based Second Shift, a nonprofit that supports kids who are aging out of foster care.

Over the Edge Birmingham 2022 was a first-time event held in conjunction with Foster Care Awareness Month, and more than 40 people rappelled down the building including veteran, amputee and Dancing With The Stars contestant Noah Galloway, Miss Alabama Teen USA 2022 AnnaLee Story, Stephen Quinn of ABC 33/40, Brittany Decker of NBC 13, executives from McLeod Software and others.

Friday, May 13 was VIP Day, when many of the aforementioned celebrities went over the edge, and Saturday, May 14 was the official “Landing Zone Party” that saw more than 100 people in attendance as they took in the action and participated in fun events.

“One of the most successful parts of the event was the outpouring from the community and the relationships that were established,” said Tammy Spence, director of Second Shift. “Going forward we would like to build on those connections to provide the sponsorships, mentorships and relational support needed by our youth who are aging out. The people in the community are the most important resource we can provide.”

Spence said McLeod Software was an excellent location for the event, and that Over the Edge would not have been possible without their participation.

“We would like to thank McLeod Software for partnering with us to present this event and for sharing the vision,” Spence said.

People can still donate to Second Shift, even if they missed out on the event. The entire month of May is Foster Care Awareness Month, and donations can be made at the following link: Fundrazr.com/OTE4SecondShift?ref=ab_0vlInHOI9Vr0vlInHOI9Vr.

Also, anyone who wants to become a relational support for a young person who is aging out of foster care may email Link@secondshiftalabama.org.

“We do have a need for more funds for our program, and all the proceeds go directly to help the kids that are aging out of foster care,” Spence said.