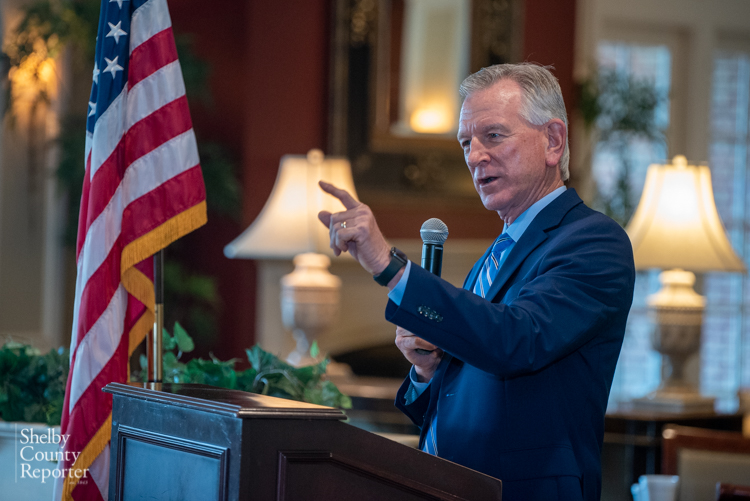 HOOVER – U.S. Sen. Tommy Tuberville, R-Alabama, spoke to dozens of local business leaders and elected officials about the economy, support for military veterans and other issues on Friday, June 17 at Inverness Country Club.

Tuberville, who won the Alabama Senate race in 2020, shared insights from his first congressional term at an “Eggs and Issues” breakfast hosted by The Shelby County Chamber and Hoover Area Chamber of Commerce.

Tuberville talked about economic challenges Americans have faced since the COVID-19 pandemic hit two years ago.

“When the pandemic hit, it was the strongest economy that this country’s had in our lifetime,” Tuberville said. “We’ve been able to hold our head above water for the last two years since then, but as we speak, we’re in trouble. Our country—and our economy—is in trouble.”

Tuberville said the country cannot have the “strongest economy in the world anymore” without fossil fuels.

“It’s like having a football team and having a quarterback, running backs and wide receivers, but not having an offensive line. You can’t win,” he said. “But for some reason, this administration wants to do away with it. We’re all concerned about the climate, but when they’re saying in 10 years we’re going to be through with natural gas, they’ve lost their mind. We can’t do it.”

Tuberville said the country is currently in a recession, citing the lack of growth in the last quarter.

Tuberville expressed frustration about how much money actually goes to states for important matters such as infrastructure.

“We had a $1.2 trillion infrastructure bill that was passed almost a year ago. We need infrastructure. I was excited about it,” Tuberville said. “When I saw that bill, I’m thinking you’ve got to be kidding me. Ten percent of it is about infrastructure; the other trillion dollars went to climate change, went to the cities to pay off union retirement funds. It was embarrassing. Obviously, I voted against it.”

Tuberville said he supports military veterans and measures that help them, along with improvements to the country’s education system and securing more grants for mental health services, especially in light of gun-related legislation under consideration.

“I’m for the Constitution. I’m for anybody that wants to own a gun to own a gun if you’re responsible and you understand the responsibility of owning a gun,” Tuberville said. “They’re putting this bill together, and I saw very little about mental health. I will not vote for this gun bill coming up because it is more about guns than it is about protecting our schools, putting people in there that can help and doing things that we need in mental health.”

Tuberville urged people to support their communities, schools, first responders and the military.

“At the end of the day, we live in the greatest country on the face of the earth,” he said. “I don’t care how bad our economy is, or how bad it sounds on television, we can make it better. I’m trying to make Alabama better, and I’m trying to make our country better.”