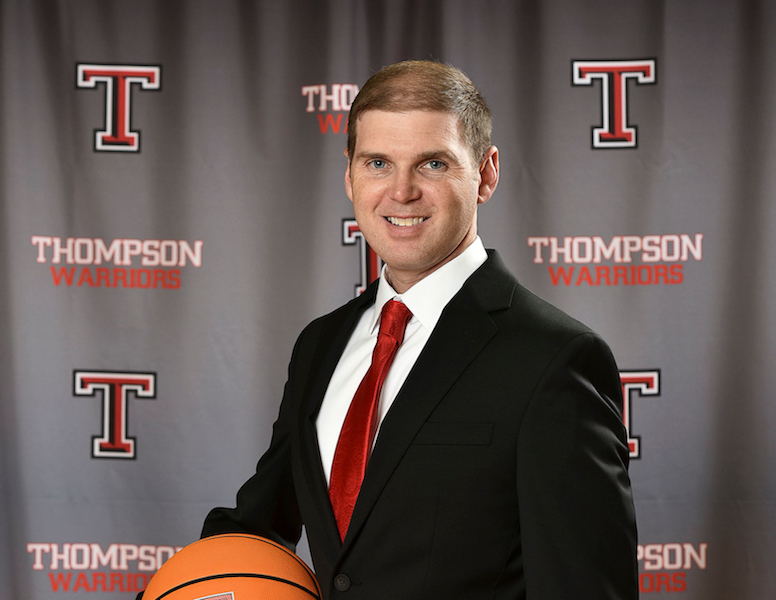 Thompson has promoted assistant basketball coach DJ Black to the position of head coach following the departure of Dru Powell earlier in the week. (Contributed)

ALABASTER – The Thompson Warriors were quick to make an announcement as to who would be taking over the basketball program following the departure of Dru Powell.

Two days after the official announcement from Powell, Thompson named assistant coach DJ Black the next leader of the team.

Black has spent the last two years as an assistant on Powell’s staff where he helped lead the team to the Sweet 16 this past year.

“This means a lot,” Black said. “Coach Powell has done a phenomenal job laying the foundation here. I told the administration, ‘We aren’t building a house here, we’re building a mansion.’ Thompson is a special place. It’s unique. Winning is a standard and I’m looking forward to being a part of that and continuing that success.”

Black added that Powell’s trust in him as an assistant was key in helping him feel prepared for the job.

“Coach Powell, one of the many reasons he is a great head coach and leader is because he gives his staff a lot of trust and input in the program,” he said. “The saying is, ‘keep this thing rolling.’ We’re going to keep it rolling. Everything is in place to make that happen. We are set up for a bright future, not just for the near future, but for a long time.”

Prior to his assistant coaching duties at Thompson, Black served as the director of basketball operations at the University of Alabama at Birmingham from 2014-2020.

Black worked under both Jerrod Haase and Rob Ehsan during his time with the Blazers.

“Being able to go from an assistant to a head coach, I’ve seen that throughout my career,” he said. “I’ve seen firsthand what those guys have done. I can take those experiences and use that to my advantage. My background is heavy in the college game and I have a lot of connections there to this day.”

As far back as 2008, he held positions as director of basketball operations and video coordinator at his alma mater Penn State University.

In addition to his degree from Penn State, he also has a master’s degree from UAB. He is married to Amy and has a newborn baby girl named Ember.

“We are thrilled to have coach Black accept the role of head basketball coach at Thompson High School,” Athletic Director Vincent Pitts said. “We have an amazing staff of coaches and we are very proud of the hard work that each and every one of them contribute to our program. We are blessed to have the opportunity look internally and find our next head coach. Coach Black is a seasoned coach and brings great energy, enthusiasm, ideas and a continued direction to the Thompson basketball program. We are excited to have Black serve as our head coach, we further welcome his family and we are excited for him to continue working as part of our staff and our school.”

Pitts also thanked Powell for his years of hard work for the Warriors, wishing him the very best as he and his family make the move to Saraland High School.

Black said he will have big shoes to fill, but he feels prepared and has lofty goals.

In addition to the success as a team, a major goal for Black is to give his players all a chance to play at the next level to as well.

“I want them to have as many opportunities as they can to be successful,” he said.

A 13-year veteran who has coached at the high school and collegiate level, Black is ready for the opportunity to continue building the Thompson basketball program.