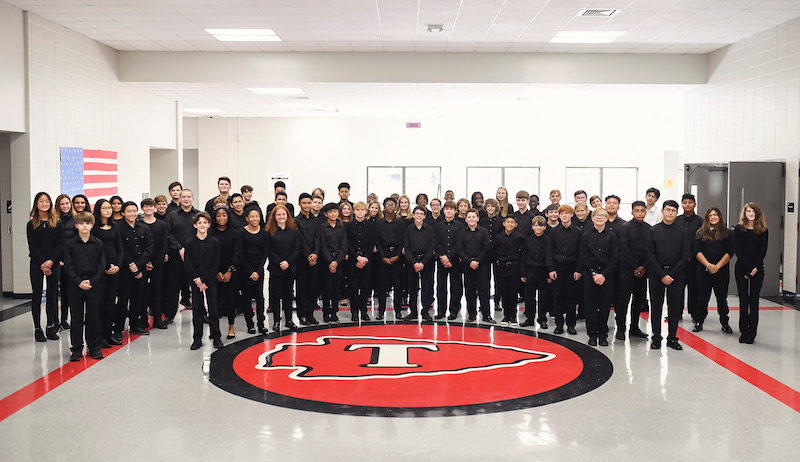 The Thompson Middle School Symphonic Band will perform at the 2023 Music for All Southeastern Regional Concert Festival in Atlanta. (Contributed)

ALABASTER – The Thompson Middle School Symphonic Band has been selected to perform at the 2023 Music for All Southeastern Regional Concert Festival at Georgia State University in Atlanta.

“This is the first time the band has been selected to perform at this festival,” said Michael Chambless, director of bands at Thompson Middle School. “Most recently, the band performed at the University of Alabama Middle School Honor Band Festival in December of 2018, and the Alabama Music Educators Association Conference in January of 2022.”

Bands from across the Southeast submitted recordings to be evaluated for a limited number of concert slots.

This year, the TMS Symphonic Band was selected among many applicants and will have the honor of representing ACS at the festival.

Chambless said the band will be performing five pieces of varying band repertoire, and preparation for the festival will begin when the school year begins in the fall.

“We will primarily rehearse the music for this festival during the school day,” Chambless said. “We will also have some after school rehearsals and weekend rehearsals to aid in our preparation.”

Chambless said the festival not only provides a great performance opportunity for the students, but the opportunity to work with some of the best music educators from across the country.

Chambless said he is proud of the students for their hard work and dedication throughout the school year.

“Being selected for this festival is an amazing accomplishment,” Chambless said. “It is also a testament to the incredible music they created this school year. This is their accomplishment.”

Chambless said many who are instrumental in the band’s success include his assistant director, Meredith Greene; and colleagues, Graham Bennett, Mark Knauss, Ashton Oliver-Bowles and Jamiah Robbins.

“I want to also thank Dr. Wayne Vickers, Dr. Neely Woodley and the ACS Board of Education for their support for our band program,” Chambless said. “A performance of this magnitude is not possible without their tremendous support. Their vision and leadership have created a wonderful culture. They always make our students feel supported and go above and beyond to provide our students with the resources they need to have a meaningful and positive musical experience.”

Chambless said the band parents also do a great job supporting the students and the band program, and this upcoming performance would not be made possible without them.