Chelsea votes ‘No’ to proposed property tax for school system 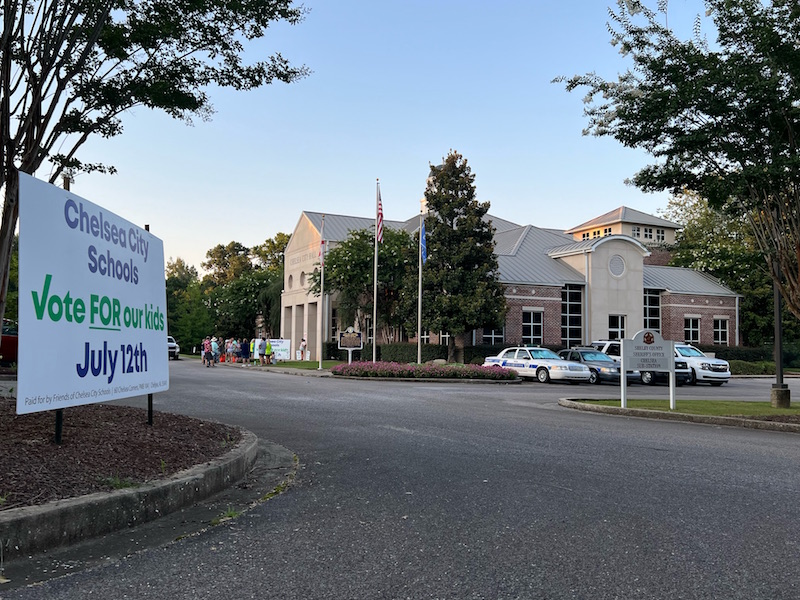 Residents of Chelsea voted against a proposed 12.5-mill property tax on Tuesday, July 12 that would have been used to start a city school system. (Reporter photo/Alec Etheredge)

CHELSEA – Just more than a year after it was brought to their attention, residents of the city of Chelsea have made their decision on whether or not to approve a 12.5-mill property tax in the city to fund a city school system.

After a day at the polls on Tuesday, July 12 the city’s residents voted no to the proposed millage increase, meaning the property tax will not increase and no school system will be created.

Out of the 14,982 residents in the city, the official results posted to city hall showed 3,663 residents voted in the election with 3,196 voting against the proposed tax and 467 voting for the proposed tax. According to the city, 34 percent of registered voters voted in the election after the city had never had 25 percent or more in any other election.

With the decision, Chelsea will remain part of the Shelby County School system rather than forming its own school system.

The city will continue to pay its 44 mills of property tax to Shelby County, but no additional city tax will be levied moving forward, which makes them one of three municipalities in the county without a local property tax. The others are Indian Springs and Westover.

“As a Chelsea resident and grandfather, I am disappointed that the vote has turned out as it has,” Chelsea Mayor Tony Picklesimer said. “However, the people, my neighbors, have spoken. As the mayor of Chelsea, I will move forward with the decision that has been made by our citizens to continue in the Shelby County School System and to partner with the Shelby County Board of Education to make our Chelsea area schools the absolute best they can be by utilizing the 1-cent sales tax that we currently collect for the schools.”

Shelby County Schools Superintendent Dr. Lewis Brooks shared his thoughts as well, saying he was pleased with the turnout.

“We are pleased that the majority of residents in Chelsea placed their trust in the Shelby County School District to continue to provide excellent educational opportunities for their children,” he said. “While we understand the desire that some Chelsea city leaders and residents had to create their own district, we look forward to partnering with them again to make sure that our schools in Chelsea are the best that they can possibly be. This includes our commitment to providing the very best instructional resources, hiring quality teachers, staff, and administrators, as well as investing in future capital improvements.”

The 12.5-mill tax was approved for a vote at a Chelsea City Council meeting on May 3, which set the vote for July 12 to determine the outcome.

The council first announced a study to determine if a school system was feasible a year and one month earlier on June 15, 2021, hiring Criterion K12 Consulting LLC to perform the study relating to the possible formation of an independent municipal school system for the city.

The study looked at available tax revenues and identified any additional revenues needed to support a new school system in Chelsea.

The city was originally planning for 20 or more mills to be added, but ultimately settled on the 12.5-mill increase, which Criterion said would be enough to start a school system.

Council members Cody Sumners and Casey Morris both submitted an alternative to the 12.5-mill property tax that could take advantage of other resources while utilizing the 1-cent sales tax and Shelby County Schools.

The proposal came in an April 27 press release that detailed why a property tax was not needed and how they could move forward.

In addition to requiring no additional taxes on Chelsea residents, the proposal calls for the city to utilize available funds from the current 1-cent education sales tax and current city bonds issued in October 2021.

Following the vote on Tuesday night, Sumners said he was excited to move forward and help make Chelsea’s schools the best they can be.

“I’m glad we can put this behind us and move forward to try and work on the division that has been created in our community,” Sumners said. “I’m looking forward to partnering with the mayor, the rest of the council and the Shelby County Board of Education to make our schools even better.”

The following are other points Sumners and Morris listed in their proposal:

Sumners said the hope is for them to be able to move forward with their ideas, but it will ultimately be up to the mayor.

“He has to put things on the agenda, but I’m hoping that will move forward so we can use that 1-cent sales tax the way it was meant to be used,” Sumners said.

The mayor echoed his sentiment in his statement after, saying now that the city has spoken, he looks forward to seeing what they can do for the schools.

“I look forward to seeing the work of Councilman Casey Morris and Councilman Cody Sumners as they move forward with their alternative plan to improve the school facilities in our area,” Picklesimer said.