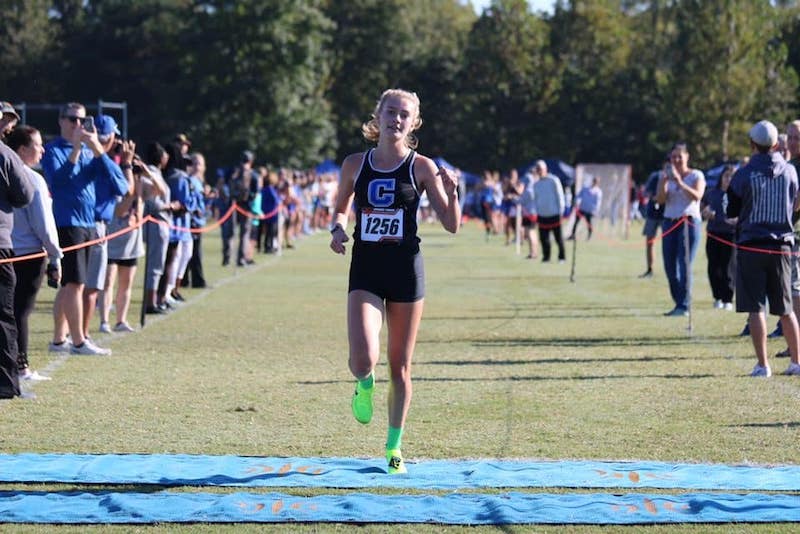 Mia Dunavant placed second trailing behind McPhail by a matter of seconds. Dunavant had a time of 8:37.64. Freshman Ty Cason came in fifth for the Hornet’s timing at 19:29.13.

Coming in second for the girls 5000-meter run was Oak Mountain. The Eagles had two runners finish inside the top 10 at this year’s event. Lauren Cole placed ninth with a time of 19:54.15 and Faith Scardino came in 10th place timing at 19:57.77.

Briarwood came in third place with two members of the girls team placing in the top ten. Sophomore Mary Grace Parker came in fourth place timing at 19:14.37 and junior Bela Doss place eighth overall with a time of 19:42.13.

In fourth place was the Helena Huskies with two girls placing in the top 25 in the championship. Ashlynn Beery came in 13th place with a time of 20:42.11 and Abigail Cory placed 23rd overall timing at 22:35.81.

The Thompson Warriors finished in fifth place Saturday morning. Sophomore Dia Montiel-Duenas came in at 21st place timing at 22:26.22 and Whitney Clark placed 26th overall with a time of 23:13.88.

Pelham placed sixth in the Shelby County Championship in the girls division. Two girls placed in the top 20 for the Panthers, Emily Wester and Ana Bravo. Wester came in 14th with a time of 20:49.73 and Bravo placed 19th overall timing at 21:57.40.

Senior Elise Picard placed third overall for Indian Springs with a time of 18:54.05 and Catherine Hinson came in 15th place timing at 20:51.69.

Oak Mountain placed first overall in the boys division 5000-meter run in the Shelby County Championship. Three members of the team placed in the top 15 for the Eagles. Senior Matthew Womack came in first out of the 119 runners that placed. Womack timed at 16:04.40.

John Shoemaker and Ryan Cox were among the three to place within the top 15 for Oak Mountain. Shoemaker came in seventh place timing at 16:40.36 and Cox placed 11th overall with a time of 17:02.09.

The Chelsea Hornets placed second in the meet and had three runners place in the top ten. Junior Parker Campbell came in second, only trailing behind Oak Mountain’s Womack by five seconds. Campbell had a time of 16:09.69.

Hudson Williams placed fourth in the race for the Hornets with a time of 16:29.55 and Camden Thomas came in eighth overall timing at 16:43.51.

Thompson came in third with three members of the team placing in the top ten for the Warriors. Senior Cameron Prosser placed sixth overall timing at 16:37.85. Doster Robinson came in ninth place with a time of 16:49.29. Trailing behind Robinson in 10th place was junior Matthew Hamlin who timed at 16:54.65.

Helena followed Thompson in fourth place in the event. The Huskies had two runners placed within the top five. Coming third overall was senior Caden Blackman with a time of 16:21.90. Aspen Warren came in fifth overall timing at 16:35.05.

Briarwood finished fifth in the event thanks to two members finishing inside the top 15. Brandon Dixon came in 12th with a time of 17:02.26 and Ford Thornton placed right behind Dixon by milliseconds in 13th place timing at 17:02.94.

The Pelham Panther placed sixth in the boys division. Senior Michael Kuper was the only member of the Panthers to place in the top 15. Kuper placed 15th and had a time of 17:15.61.

Indian Springs finished the boys division in eighth place. Quinn Conroy was the only runner from Indian Springs to place within the top 50. Conroy placed 38th overall timing at 18:56.58.

Calera did not place overall in the boys division, however, Tucker Busby placed in the top 75 for the Eagles. Busby came in 64th place with a time of 20:14.60.

Chelsea, Helena, Oak Mountain and Shelby County will compete next in the Jesse Owens meet held at Lawerence High School on Saturday, Oct. 1.