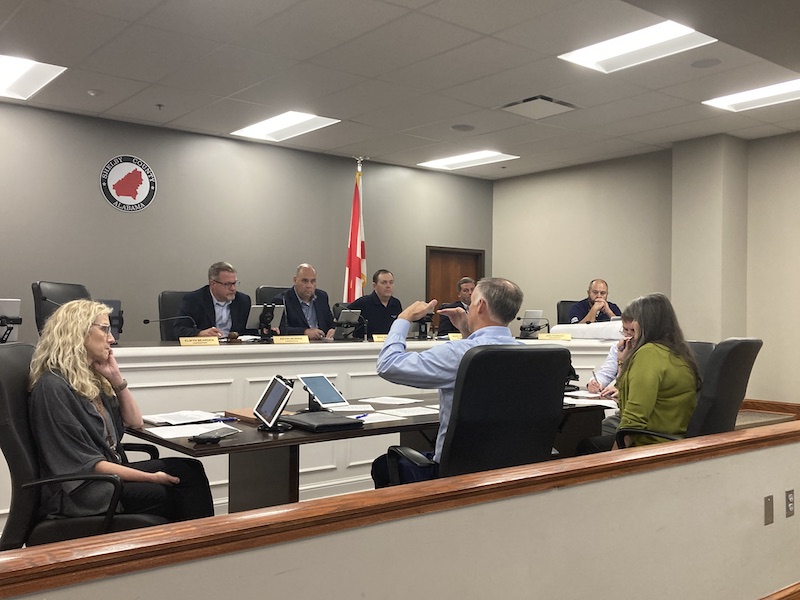 After approving the budget for the next fiscal year, the Commission has begun its work on contracts.

“Once we get done with a budget, and it gets approved, we immediately go into the phase of sorting contracts,” County Manager Chad Scroggins said. “Since the last meeting, we’ve been doing a lot of contracts.”

An example of these contracts are those they sign with the municipalities for the Sheriff’s Office deputies.

“Otherwise, we are continuing to wrap up some projects, which includes Double Oak Park,” Scroggins said.

He also shared developments on the turf and track projects at Chelsea High School.

“They had the dedication Friday night, Commissioner Hayes attended,” Scroggins said. “The track is not finished yet, we’re going to wait until after football season to actually put in the track.”

“In every month we have collected more than we did the previous year,” Naugher said. “I keep saying at some point that (there’s) got to be a change in that, but as of now that’s what we have.”

“We’ll continue to look at this, but when we have 7.5 percent over in sales or higher in property tax or higher in lodging, we will then roll those numbers into fund balance reserve,” Scroggins said. “So this gap, both savings of our expenses and the overages in our revenues creates the gap which we put into fund balances (which) are for future projects.”

He explained the positive aspect of this approach.

“When we save money, we invest them back into the infrastructure of our county,” Scroggins said. “I think that’s what makes us significantly different than many of the other counties in the state, is that we actually have this thing called fund balance reserve.”

The meeting ended with a final remark by Chairman Kevin Morris.

“Well, I think the one thing that we’ve heard is just the consistency to get better. We were able to adjust the budget mid-year and still retain very good percentages. We’ve been able to spend money prudently and advance the county in a lot of ways. A change of management always brings excitement amongst people,” Morris said. “There’s a whole lot of people behind these moving pieces, and we appreciate all the department heads and related folks taking that budget seriously along the way because everyone’s decisions impact the big picture.”