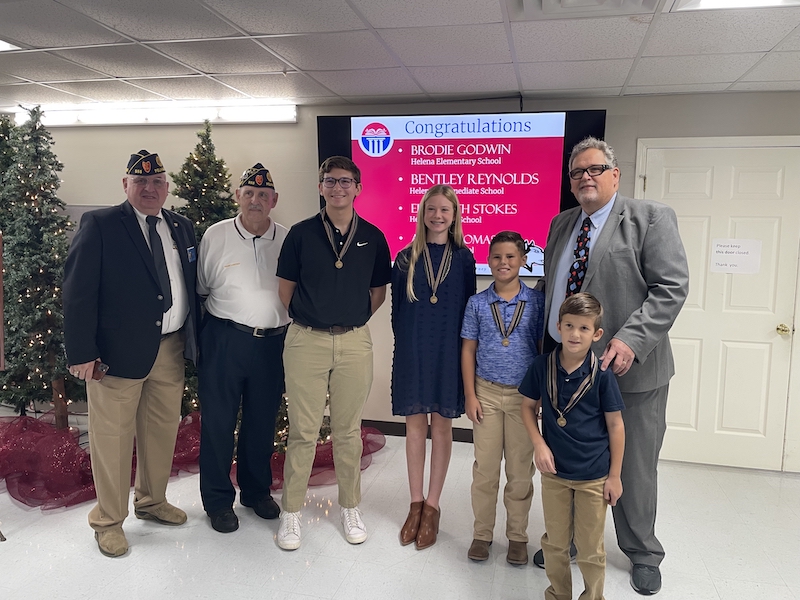 Four Helena students were honored with the Character in Action Awards on Wednesday, Sept. 21. The awards honor students who are chosen by their teachers and counselors because they exemplify good character, responsibility and kindness. (Contributed)

HELENA – Select students from Helena schools were honored with a special recognition at the Character in Action Awards on Wednesday, Sept. 21.

The Character in Action Awards are presented to exemplify students who have been handpicked by teachers, counselors and administrators for displaying respect, courage, responsibility, friendship and kindness toward others. The award also honors the parents and caregivers who have raised these students and who continue to work hard to support their success.

The following students were recipients of the 2022 addition of the awards:

Thomason, a senior at HHS, said he wasn’t sure what the awards were at first, but he was honored when he realized what a big deal they were. Thomason is on the Leadership Team in band, a peer helper and is enrolled in a number of AP classes.

Lizzy Stokes, an eighth grader at HMS, also was surprised by her nomination.

“I was very excited, but I was more surprised than anything,” Stokes said. “I was very thankful that my teachers selected me for this award. It means a lot to me.”

Stokes is on the tennis team, SGA eighth grade president and also part of the Lunch Buddies, which allows students to engage with their fellow students who have special needs.

“I love doing that program,” she said. “I’ve made so many new friends.”

Thomason said awards like the Character in Action awards are important because it inspires students to strive for that exemplary character.

“I think awards like this matter because we can not only set an example for ourselves, but receiving this really encourages me to be keep striving to be an example for others,” he said.

Stokes echoed Thomason’s view, saying it feels good to have her character recognized.

“I think these awards are important because, like you think your teachers know you care, but this shows it,” she said. “It helps you know that your teachers not only think you’re a good student, but know that you’re a person that can help other people. They know I’m happy to do that.”

Lizzy’s mother Beth said she and the rest of Lizzy’s family are extremely proud of their daughter’s accomplishment.

“We’re just extremely proud,” she said. “It’s almost surreal in a way. It’s reassurance that you’re on the right track as a parent.”