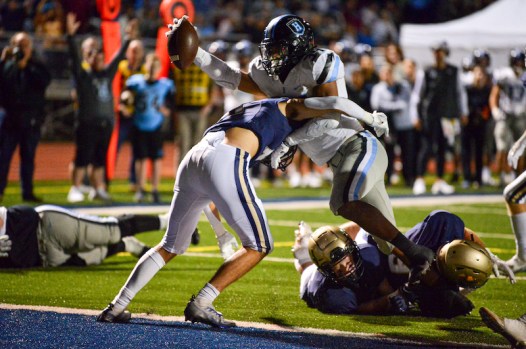 Jordan Washington scores one of his four touchdowns in Helena’s 31-21 victory against Briarwood on Friday, Sept. 30. (For the Reporter/Jeremy Raines) 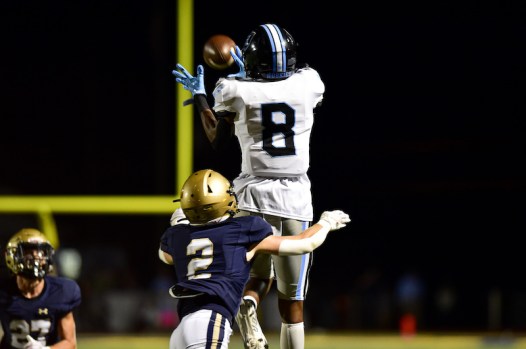 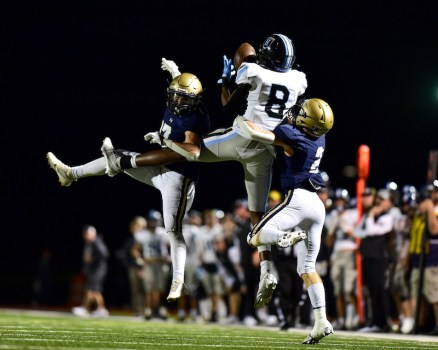 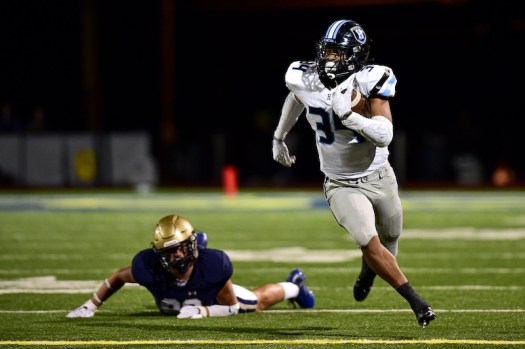 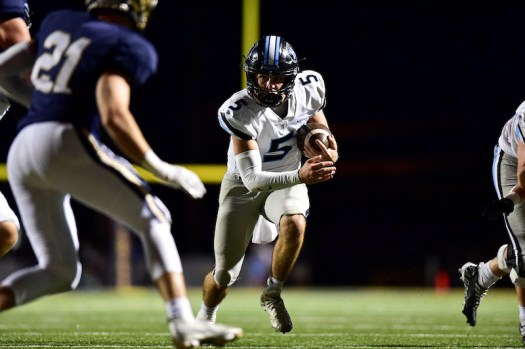 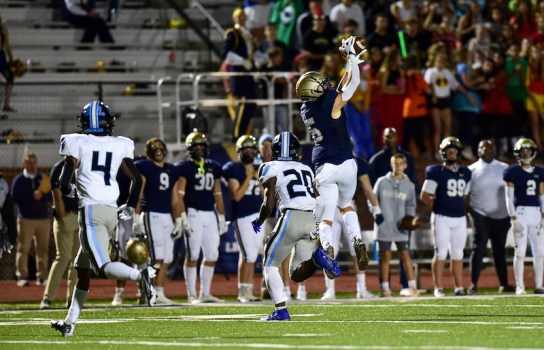 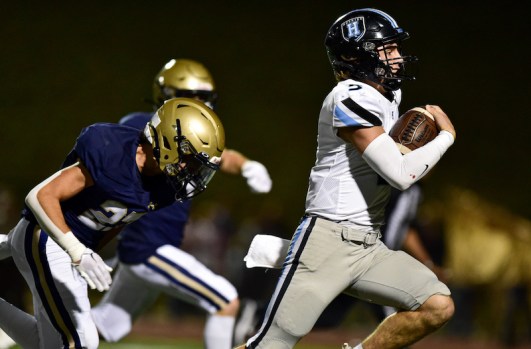 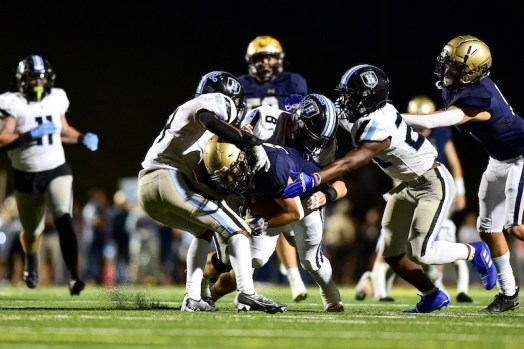 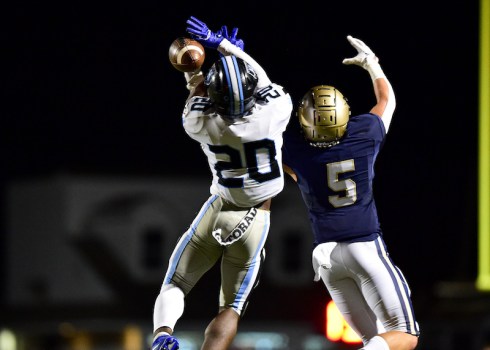 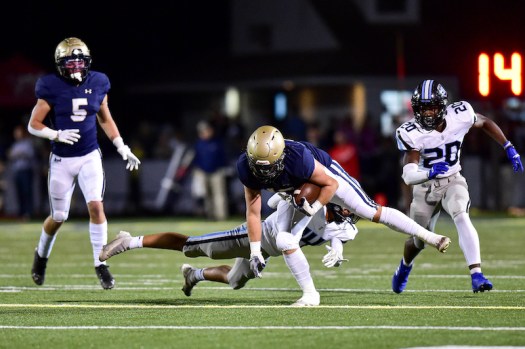 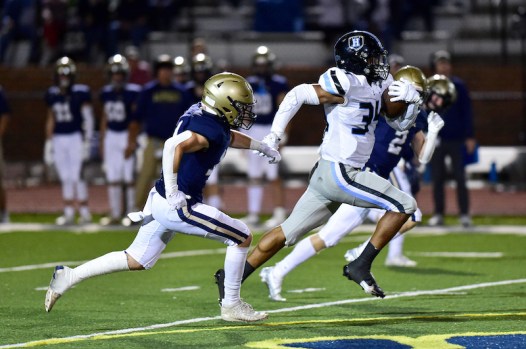 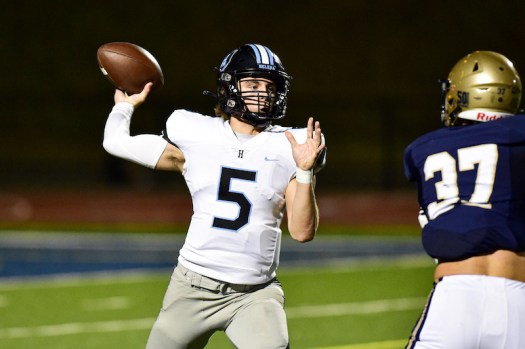 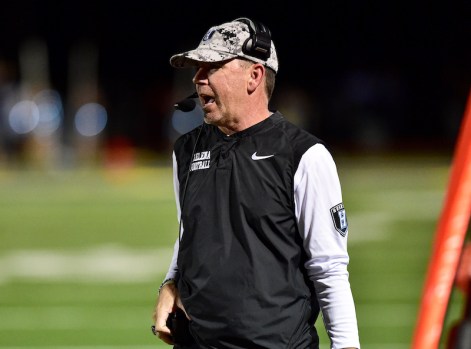 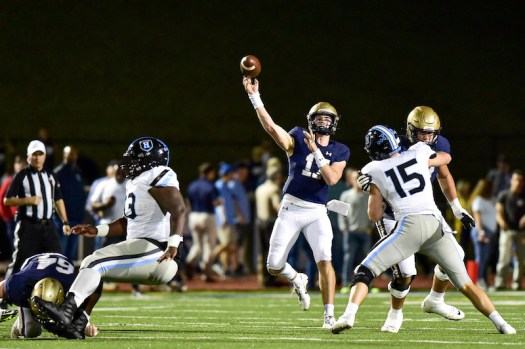 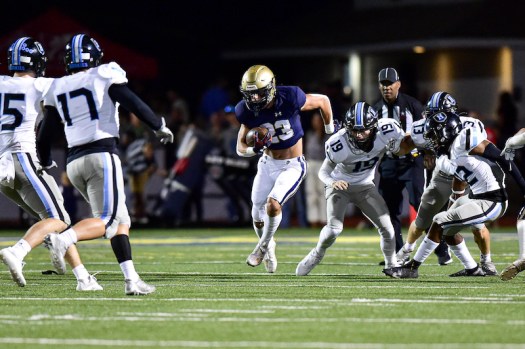 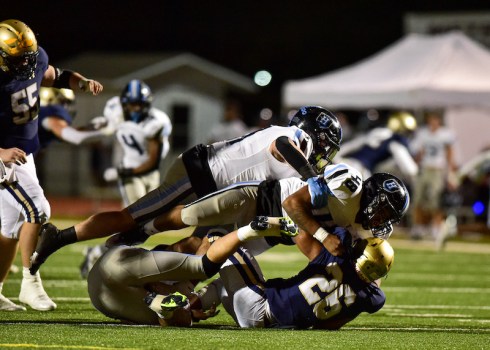 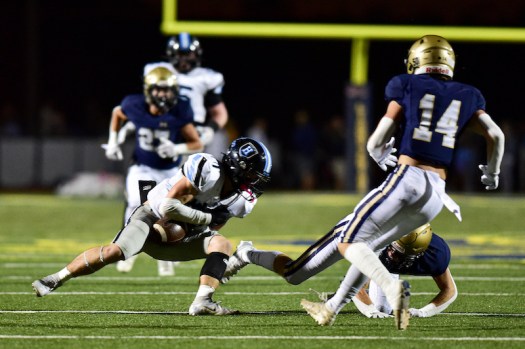 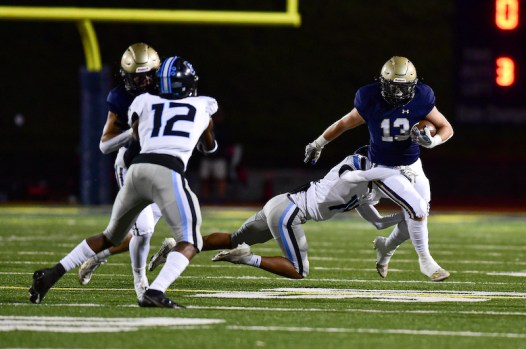 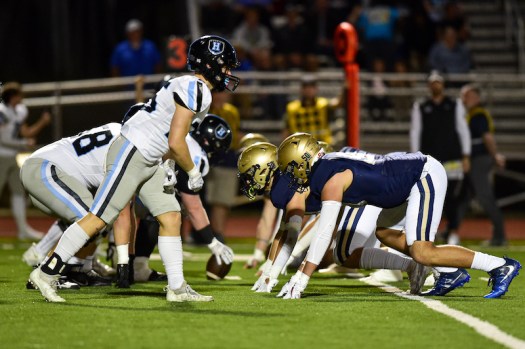 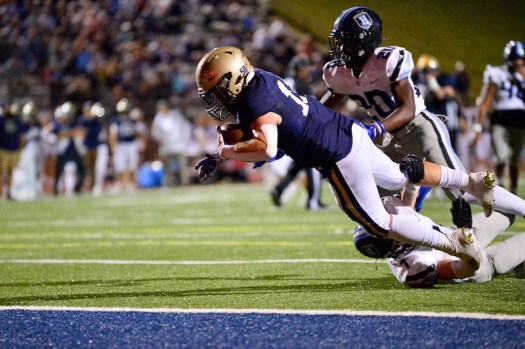 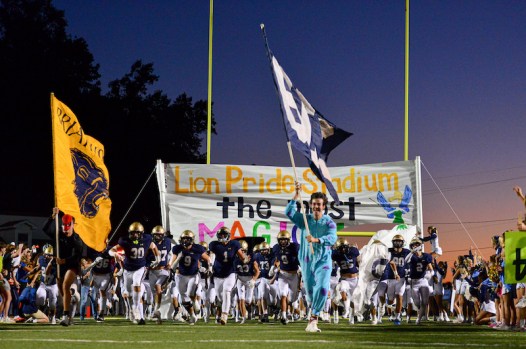 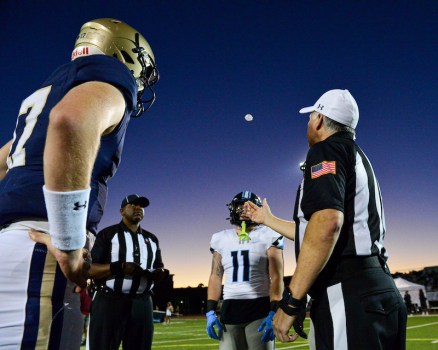 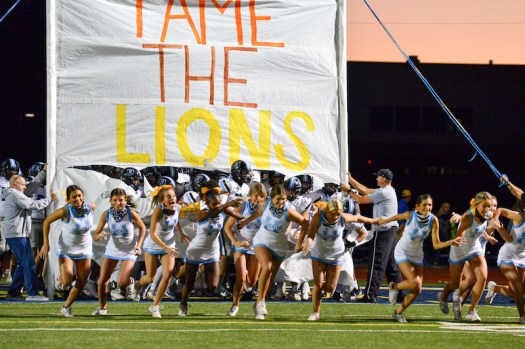 NORTH SHELBY – After taking a 31-21 lead thanks to a 30-yard field goal from Austin Lewis with 2:05 left to play against region foe Briarwood, the Helena Huskies took the field looking for one last stop against Clemson commit and Lions’ quarterback Christopher Vizzina.

Not backing down from the challenge, Helena finished an impressive defensive game with two sacks to set up fourth-and-30, eventually leading to the game-sealing interception to close out the 10-point victory.

“We were dropping eight and rushing three too, so that was big for our D-line,” Helena head coach Richie Busby said of the final defensive series. “We had a great week of practice this week. Probably the best week of practice we’ve had all year and it’s what we challenged them to do. We knew it was going to take a full game to beat them because (Vizzina) is so talented. Really proud of our defense. He’s going to get some points on you, I don’t care how good you play, but I really liked how we pressured him and got to him tonight I’m really proud of our whole team.”

The defensive stand against one of the country’s best quarterbacks capped off a hard-fought win for the Huskies, who took a 14-0 lead, only to have it erased before eventually breaking a 21-21 tie with 10 unanswered in the final quarter.

“This lets us go into an off week with a win which is a whole lot better than off a loss, but it’s like I’ve been saying every week, this region is still up for grabs,” Busby said. “Obviously Homewood is sitting there and they’re the team to knock off, but there is a lot of football left to be played in this season.”

In a slow-paced and physical opening half to the game, Helena was able to gain some early success up front on the offensive line, which led to a big first half for Jordan Washington.

The junior running back for the Huskies reeled off two touchdown runs in the half that allowed Helena to jump out to a 14-0 lead.

After both teams punted during their first two drives, Helena struck first when they converted on a third-and-8 during the team’s third drive with a 32-yard screen pass to Washington. That set up a 1-yard touchdown run from the running back a play later to make it 7-0 with 2:13 left in the opening quarter.

The next five combined drives ended with four punts and a Hunter Hale interception, which led to a quiet few series up until the 5:30 mark.

That’s when Washington left his mark once more.

On play one of the drive for Helena, he busted through the line of scrimmage with strong blocking and blew by the defenders for an 80-yard touchdown run to make it 14-0 with 5:52 left in the second quarter.

“I’m really proud of our offensive line,” Busby said. “We kind of moved a couple of positions this week to give us a little better chance to be successful and they did it.”

Briarwood, however, has been clutch late in halves this season, and that was no different for Christopher Vizzina and the Lions this time around.

They started the ensuing drive at their own 32-yard line with 5:42 left in the half and strung together an 11-play drive that was capped off with a 10-yard striped touchdown pass from Vizzina to Brady Waugh with 56 seconds left in the quarter, creating a 14-7 game at the half.

The Lions then carried that momentum into the second half with a 10-play, 70-yard drive during the opening drive of the third quarter to not only even the score at 14-14, but eat up 5:22 of time.

Vizzina eventually capped off the drive with a 1-yard touchdown run and was starting to heat up.

On the ensuing Helena drive, however, Helena’s run game continued to be a difference maker when quarterback Dalton Lewellyn reeled off a 49-yard run that was stopped just short with a shoestring tackle inside the 10-yard line.

Eventually, Washington added his third touchdown of the night from 5 yards out to make it 21-14.

Briarwood responded again with the offense now clicking. This time, the Lions put together a quick drive of less than two minutes that saw a 43-yard pass from Vizzina to Cooper Higgins, a 17-yard pass to Waugh and a 20-yard touchdown pass to Higgins to tie the game at 21-21 going to the final quarter.

The Huskies, however, made the difference with the first three drives of the final quarter.

They marched 82 yards on the ensuing drive, as Washington scored his fourth touchdown of the night from 4 yards out to make it 28-21 with 8:10 left.

“He’s still trying to feel his way through,” Busby said of Washington’s effort. “This is what, his fourth game he’s getting to play in, but when we challenged him, he toughened up and he did what he usually does and really ran the ball hard.”

Then, Helena made the first of two crucial tops in the final quarter, forcing Briarwood three-and-out on the next drive.

That ultimately led to another long, 10-play drive for Helena that ended with a Lewis 30-yard field goal to create the 10-point gap and put the defense in prime position to earn the win.

Busby was also complimentary of Torrey Ward, who made several big catches down the stretch, including some in double coverage.

“Our offense ran the ball when we needed to and took some shots, and I know there are a couple Torrey wishes he could get back, but he came bac, but he did something he hasn’t done all year,” Busby said. “He got his composure and made several good catches there in clutch situations.”

Washington finished with 180 yards and four touchdowns in the winning effort for Helena.

Vizzina totaled 185 yards through the air and had two touchdown passes and a touchdown run in the 10-point loss.

The Huskies will now have a week off before finishing region play with a road trip to Calera and a home matchup with Benjamin Russell.

Briarwood hosts Calera next week in a big region game with playoff impliations, while the Lions finish region play with road trips to Benjamin Russell and Homewood.