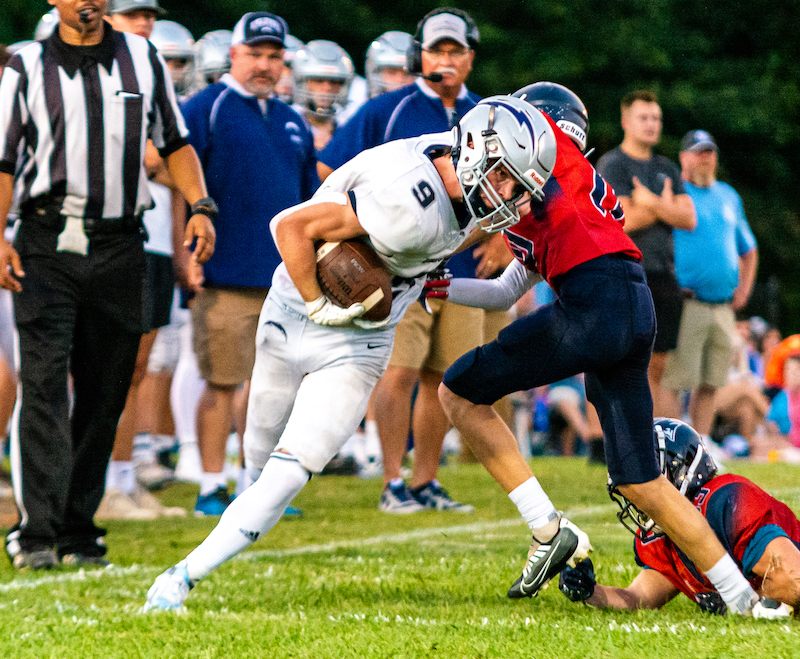 The Evangel Lightning improved to 6-0 on the season Friday night, Sept. 23, handing Lighthouse its first loss of the season in a 63-28 victory. (File)

ALABASTER – For the first time since 2019, Evangel Christian School defeated Ezekiel Academy in the regular season, posting a 63-18 win Friday night. The win moves Evangel to 7-0 overall and 3-0 in the region this season.

The 45-point victory matches Evangel’s 80-35 win over Ezekiel in 2019.
“We played well. My kids were excited to play them. They were fired up. It was a great win for us and our school,” said ECS Coach Tim Smith. “They’re the team that’s kind of had our number the last couple of years. It was good to get that off of them. We’re off this coming week so we’re going to give them a couple of days off and get ready for this stretch run we’ve got. I’m really proud of how hard our kids played.”
Ezekiel and Evangel traded scores on the first four possessions of the game. Twice Ezekiel’s Ethan McBride connected with Matty Spackman on 25-yard touchdown passes, but Evangel answered both times with long touchdown runs. Hunter Atkins scored from 29 yards to answer the first Ezekiel TD, while Will Welch ran one in from 40 yards out to retake the lead, 14-12.
Atkins, who rushed eight times for 70 yards in the game, added a 12-yard TD before the end of the first quarter
The Lightning grew its lead to 35-12 in the second quarter, as Eli Whitfield completed a pass to Judah Thompson for a 42-yard touchdown, and Whitfield connected with Jackson Tuell for a 52-yard score. Ezekiel answered with a blocked field goal return for a touchdown before the half.
A 28-point third quarter further broke the game open for Evangel. Welch returned the opening kickoff 60 yards to open the quarter. Later, Whitfield hit Welch for his third touchdown pass of the night, this time from 15 yards out. Welch finished the night with 63 yards and two touchdowns on three plays. Whitfield was 7-of-12 passing for 165 yards and three TDs.

Evangel forced six turnovers in the game, including five interceptions. Three of the picks came from Zane Barlow, including a 29-yard pick six in the third quarter. Cole Romano followed with scoop-and-score fumble recovery for a touchdown to close the third quarter and cap all scoring.