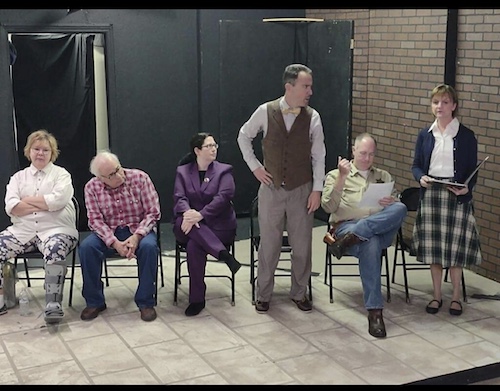 PELHAM – ‘Death and Taxes’ is a “thrilling murder mystery chalked full of comedy and suspense.”

‘Death and Taxes’ opens on Oct. 7 at 7:30 p.m. and runs every weekend until Oct. 16. The play is directed by Thomas Robinson and is about a collection of townspeople who are looking for the murderer or an IRS agent.  Performances will be held at Pelham Municipal Court House.

Genni Boatwright, who plays the town mayor Kathleen Lyle in the comedic murder mystery, said the cast is thrilled to be working together.

Boatwright said she feels that members of the audience will enjoy the performance as much as the actors have enjoyed it.

“It’s fun,” she said. “The environment is fun for the audience. You can just kick back, relax and have a good time.”

Boatwright said the audience are townspeople in the play.

“The audience is considered the townspeople,” she said. “Instead of just being a regular audience, they are a part of the council meeting and are there to witness it.”

There is more to Boatwright’s character than meets the eye, she said.

“She is supposed to very prim and proper,” Boatwright said. “But the reality is, you can take the girl out of the south, but you can’t take the south out of the girl. You can tell under the surface she is still very feisty. She is not afraid to give back what the townspeople give to her.”

With COVID-19 putting a damper on live shows, Boatwright said she is glad the arts are back in full swing.

“The arts are so important,” Boatwright said. “I am hoping it will stay on this trajectory. It is so important for people to be entertained, and as actors, to entertain people.”

“Lydia is sort of innocent for her age, and (is) not a very experienced woman,” Rushing said. “She is a little on the nervous side, not very confident and dingy.”

Rushing said she agrees that the cast is coming together as a unit and really enjoys partaking in a comedy.

More information on Death and Taxes can be found at Southcitytheatre.com