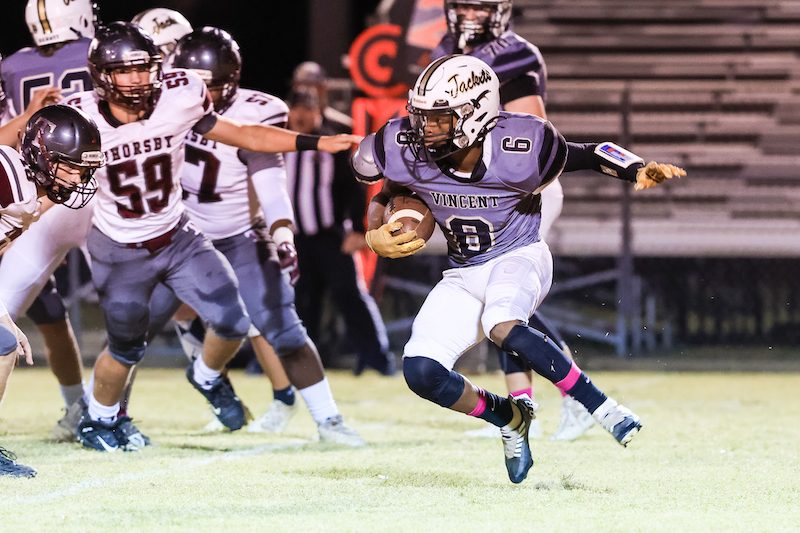 GROVE HILL – A historic season for the Vincent Yellow Jackets came to an end on Friday with a 43-28 loss to Clarke County in the second round of the state playoffs.

Last week’s first-round win over Luverne represented the school’s first playoff win since 2011 and its first ever 10-win season according to the best available records, but the Yellow Jackets could not get past the Class 2A defending state champion.

“Despite the loss, I couldn’t be prouder of this team,” coach Lucas Weatherford said. “This senior class may be the most special group I’ve ever been around, and they helped turn this program around and make school history. We obviously wanted to keep playing, but we will look back and realize just how much we accomplished. This is the new standard for Vincent football, and I expect us to be back in the mix next season.”

The Jackets (10-2) got off to a good start. On the second play of their first possession, RyKelus Robertson raced through the Bulldogs’ defense for a 52-yard touchdown run.

Tray Youngblood ran in the 2-point conversion to make it 8-0.

Clarke County (7-5) tied the game at 8-all in the first quarter, and then in the second quarter, the hosts claimed a 21-8 lead.

VHS clawed back with a scoring drive ignited by a 50-yard run by Robertson, and Youngblood found the end zone from 8 yards out.

Keetlyn Pelmer passed to Ray Albright for the 2-point conversion, and the score was 21-16.

After another Clarke County score and with about 2 minutes remaining in the first half, Vincent quarterback Blake Allums engineered a drive utilizing a 35-yard pass to Youngblood and a 19-yard touchdown pass to Casen Fields.

After a failed 2-point play, the score was 27-22 in favor of the Bulldogs at halftime.

Clarke County delivered a body blow in the third quarter with a drive of about 9 minutes that resulted in a touchdown to go up 35-22, and the Bulldogs scored again early in the fourth quarter to make it 43-22.

With no quit in them, the Yellow Jackets drove the field one final time. Robertson had runs of 20 yards and 17 yards, and Pelmer had a 21-yard run and capped it off with a 6-yard touchdown run.

Vincent could not recover the ensuing onside kick, and Clarke County ran out the clock.

Robertson finished with 13 carries for 176 yards.

Clarke County will visit Highland Home in the third round of the playoffs on Nov. 18.