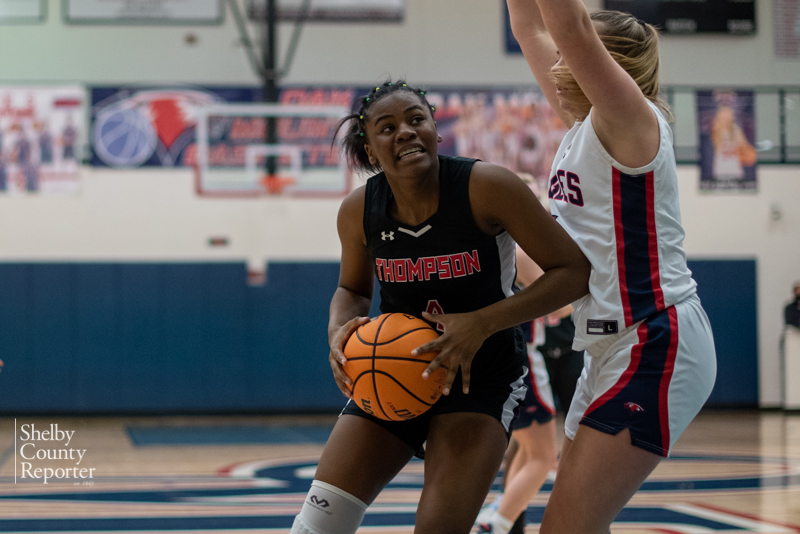 Thompson quickly picked up a slight lead toward the end of the first quarter. The Warriors picked up 12 points from Zyon Gaiters scoring four points, Maliyah Green scoring five points and Morgan Adolphus making a three outside the arc.

Oak Mountain pulled away with 10 points in the early part of the game. Maggie Norris and Vica Hood scored three points each for the Eagles. Lucy Mckeown and Reagan Whitaker knocked down one basket each.

The Eagles clearly adjusted their defensive strategy in the second quarter, completely limiting the Warriors from obtaining any additional points for the rest of the first half. However, Oak Mountain became more aggressive in the offense as well.

Whitaker had a strong performance in the second quarter with three baskets totaling six points. Mary Kate Ervin followed Whitaker with four points of her own and Kathleen Matuszak topped off Oak Mountain’s double-digit lead with two more points.

Thompson was able to slowly close the gap between the two teams, finishing the third quarter behind Oak Mountain 30-28. The Warriors were the ones who were in control from there on out.

Limited to only achieving eight points early on in the second half and tagging on 10 more points late in the game. This resulted in the Eagles losing their lead late into the final quarter and ultimately losing the game.

Although Oak Mountain had lost the game, Whitaker carried the Eagles in the end, totaling a combined 12 points in the third and fourth quarter.

Hood went two for two from the free throw line for the Eagles and Matuszak finished the night with two more points.

A strong second had catapulted the Warriors to their latest win having totaled 16 points in the third quarter and 21 in the final quarter.

Karlyn Oden effortlessly knocked down two baskets outside the arc totaling six points in the final quarter. Locke Little, Jayla Forbes and Dasia Huynh extended the Warriors’ lead to end the night on a high note for Thompson.

Thompson finished the night with a win against Oak Mountain with an exciting end in the fourth quarter. The Warriors defeated the Eagles 49-41.