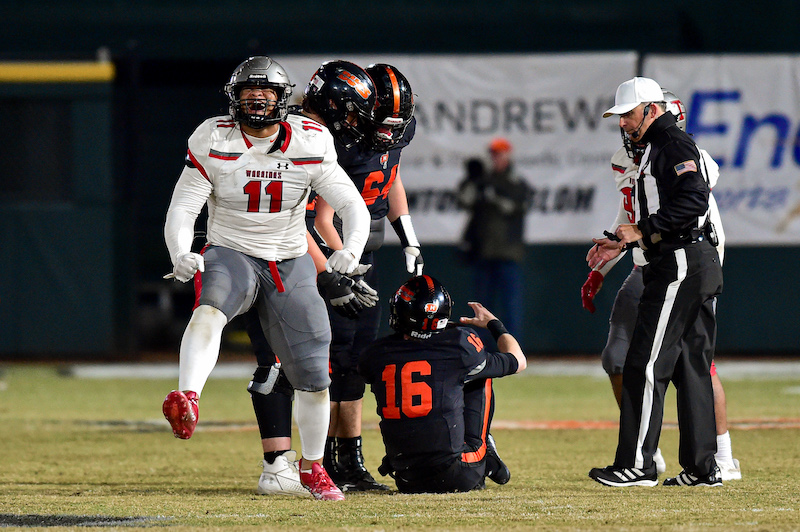 The Thompson Warriors will take on Auburn High School in Jordan-Hare Stadium for this year’s Class 7A State Championship on Nov. 30. The Warriors will be seeking a fourth-straight title. (For the Reporter/Jeremy Raines)

For the second time in three years, the Thompson Warriors and Auburn Tigers will meet for the Class 7A State Championship at Jordan-Hare Stadium on Wednesday, Nov. 30, and if it’s anything like the last matchup, we’re in for a treat.

In that matchup, the Warriors trailed 28-19 with 1:19 to play. A touchdown on a blocked punt returned for a touchdown, an onside kick recovery and a last-second field goal, however, gave Thompson a thrilling 29-28 comeback victory for the championship.

Now, they’ll enter this season’s championship matchup against the Tigers as the three-time defending state champion.

Battling for their fourth championship in a row, this year’s senior class will be looking to cap off a special four years that would close with a state title each season.

Auburn, however, will be out for redemption in hopes of stealing the spotlight away from the Warriors.

Both will enter the championship game confident after redeeming regular-season losses.

Thompson, who lost to Hoover 9-0 to end the regular season, ultimately losing the region championship, redeemed that loss in a dominant way with a controlling 40-10 semifinal win over the Bucs on Friday, Nov. 18.

Taking a 24-0 lead in that game, the Warriors controlled it from start to finish to earn a fifth consecutive trip to the semis.

Auburn also redeemed a 38-17 regular-season loss to Central-Phenix City with a 14-13 victory against the Red Devils in the semifinals.

The Tigers trailed 13-7 late but overcame the deficit and polished off a strong defensive effort with a final stand to pick up the one-point win.

Now, the two teams led by head coaches with a combined 11 AHSAA state championships will square off with another on the line.

Can the Warriors win their fourth in a row and head coach Mark Freeman his seventh, or will it be the Tigers winning and head coach Keith Etheredge picking up his sixth?

Thompson will enter the game 10-3 overall this season, but the Warriors have won 10 of the last 11, redeeming the lone loss in that span.

Their only other two losses came at the hands of Buford (Georgia) and Lipscomb Academy (Tennessee) by scores of 38-7 and 24-14, respectively, and both of those games were one score games in the third quarter.

The Warriors are now averaging 28 points per game offensively, while the defense is officially giving up 12.1 points per game, a number that is skewed slightly.

It’s a defensive unit loaded with talent that includes a front seven that handles both the rushing game and passing game extremely well.

The front seven is led by Peter Woods, Jake Ivie and Seth Hampton, who are forces in the pass rush, the run game and in coverage, while the back end features Kaleb Harris, Tony Mitchell and Anquon Fegans just to name a few.

Offensively, the Warriors will enter this game off a motivating 247-yard rushing performance against Hoover on 42 carries.

That will be one of the biggest benefits entering the game, as AJ Green and Michael Dujon are both running well, while the offensive line seems as motivated as it has been all season.

The passing game continues to be hit or miss, but Trent Seaborn has managed games properly as an eighth-grade starter the last three weeks, even throwing for 342 and four touchdowns to open the playoffs.

The last two games have featured less than 100 yards each, but the threat of the pass and athletes such as Deuce Oliver, Korbyn Williams and others can break big plays at any given time.

The Auburn defense isn’t too far off the mark set by the Warriors. So far this season, the Tigers have given up an average of 17.2 points per game and have gotten their confidence back at the right time.

They started the season strong giving up 14 or less in four of the first six and 21 or less in all six before giving up 29, 38 and 29 in three straight.

Since then, however, the Tigers are back to their dominance on defense, picking up a shutout to end the regular season and giving up 17, 20 and 13 in the first three rounds of the playoffs.

Entering this matchup, they’ll be confident on that side after going from giving up 38 to Central-Phenix the first time around to giving up 13 in the clutch.

And just like Thompson, it is a unit loaded in all three facets of the defense that will be ready to make a statement with plenty of talent.

As for the Tigers on offense, it’s a unit that is led by dual-threat quarterback Clyde Pittman and running back Da’Vaioun Williams.

Those two have been key in the team’s success, as Auburn has averaged 37.4 points per game, scoring 35 or more in the four games leading up to last week’s 14-13 win.

Boy, has this game got a lot of intrigue.

Many thought it would be Central-Phenix City and Hoover battling it out this year, but now, these two teams are as motivated and determined as ever after inspiring efforts in the semifinals.

Ultimately, Thompson has the experience of playing in this game for a fifth year in a row, and the senior class has won three in a row. That’s obviously a benefit as this year’s group looks to finish with a state championship every season.

That said, there is a level of nervousness that could come along with that and a pressure of living up to the expectation and not being the one to end the streak, while Auburn enters simply looking for redemption.

Auburn, however, has never won a state championship, which puts a similar pressure on this year’s team.

Quite simply, whoever enters this game with the same determination and motivation that we saw in the semifinals will have the better chance to win.

For a long time this season, I was critical of the Thompson offensive line.

The unit dealt with injuries and replacing starters, which led to its share of ups and downs, but all of a sudden, that unit looks to be a difference maker.

We know what we are going to get from both defenses, but one of these teams is going to have to find an edge offensively to get the necessary points.

In the matchup against Hoover, the offensive line not only looked as good as it has this entire season but possibly as good or better as any of the previous three that won state championships.

They opened holes, pushed blocks downfield and looked like a unit that was playing with a certain tenacity it hadn’t played with this season.

It led to 247 rushing yards for Thompson.

That aspect alone cost them the Hoover game the first time around, shifting away from the run near the red zone despite its success. Now, they’ve established it, which only benefits the passing game.

This game will be a different animal, however, and Auburn will be ready to push right back.

But, with the offensive line playing as well as it did, knowing just how dominant the defense is both in the trenches and beyond, it’s tough to see them losing that mentality knowing just how vital they are to the success of winning a championship.

Yes, the Warriors will likely need more explosive plays in the passing game this week to have success, but this is as balanced as they’ve been all season.

I doubted them going into the semifinal game because of the uncertainty surrounding the offense, but they did exactly what they should have and it paid off. Now, it’s tough for me to doubt a team that has won three state championships in a row.

I think this may be the toughest of the last four championship games for them, which means they better have that same edge they had against Hoover or it won’t go well; but, they’re the three-time defending champs and until they get beaten in this spot, you can’t go against them.