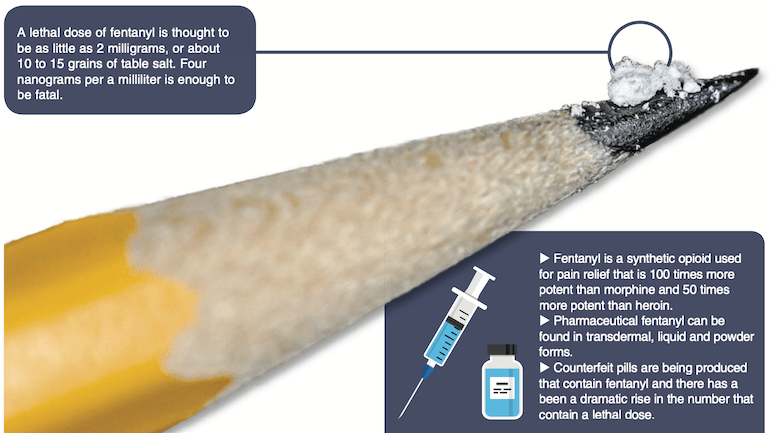 The widespread abuse of the synthetic opiate fentanyl, poses a significant threat to Shelby County and the nation. (Graphic by Martin-Lively)

A young child is found alone in a gas station parking lot and brought back to the Calera Police Department while the Fire Department tries to save the lives of both parents who have just overdosed.

“When an 18-month old child is in your office for a few hours while you wait on family services to come and take the child, that really is the face of how damaging that drug addiction is,” Calera Police Chief David Hyche said.

When most people think of the deadliest drug in their area, they might consider the usual suspects: cocaine, methamphetamine, heroin, MDMA and others. However, there is a drug that has become a far deadlier problem as of late.

Fentanyl is a small and unsuspecting powder that can kill a person with a dosage as low as two milligrams. An amount that can fit on the tip of a pencil.

Pharmaceutical fentanyl is a synthetic opioid that is used for treating severe pain­—typically advanced types of cancer pain, according to the Centers for Disease Control. Fentanyl is 50 to 100 times more potent than morphine and is prescribed in the form of patches or lozenges.

However, many fentanyl related deaths can be linked to illegally made fentanyl, which is consumed by itself or cut with other drugs.

“When people learned of (its) high potency, we see it mixed with other drugs,” Hammac said. “Whenever fentanyl first came to our attention, we saw the presence of fentanyl in heroin.”

Hammac said he has seen cases of cocaine, MDMA and marijuana being laced with fentanyl in Shelby County in the last 3-5 years.

According to the Drug Enforcement Administration, counterfeit pills are being produced that contain fentanyl and there has a been a dramatic rise in the number that contain a lethal dose.

“The United States is facing an unprecedented crisis of overdose deaths fueled by illegally manufactured fentanyl and methamphetamine,” said Anne Milgram, administrator of the Drug Enforcement Administration, in a press release. “Counterfeit pills that contain these dangerous and extremely addictive drugs are more lethal and more accessible than ever before. In fact, DEA lab analyses reveal that two out of every five fake pills with fentanyl contain a potentially lethal dose.”

Shelby County Coroner Lina Evans explained her perspective on the rising issue of fentanyl in the county.

“It’s very cheap, and it takes just a little bit to do the trick,” Evans said. “It got to the point that I don’t even see just heroin anymore. I can’t even recall the last heroin death I had.”

According to Evans, most of the overdose deaths she sees are either straight fentanyl or fentanyl mixed with methamphetamine. There have been 48 overdose deaths in Shelby County this year and half of them are related to fentanyl, she said.

Hammac explained his reasoning as to why there has been such a spike recently in fentanyl drug abuse.

“A question someone may ask, ‘Why do we see all of a sudden, a huge spike in fentanyl,’” Hammac said. “It’s a traditional supply and demand environment. It’s cheap, easy to obtain (and people) can easily purchase it off the dark web.”

Hyche said he believes the ease at which many can obtain the drug is one reason as to why its usage is on the rise.

“I’ve been in law enforcement 35 years,” he said. “Heroin used to be the drug that everybody was afraid of, but it wasn’t that widespread because it was very expensive. Then, because of the ease of getting it across the (southern) border, heroin became cheaper. But now, this fentanyl is mass produced in China and is so much more powerful than heroin.”

Fentanyl is typically pressed into pills in Mexico and then is taken across the border, he said.

“It’s so cheap that it’s used often in other drugs to make them more potent,” Hyche said. “Sometimes, we’ll find marijuana that’s been laced with fentanyl or just about anything else you can imagine. There’s really an unlimited supply of it coming across the border and there’s an unlimited demand, and it makes it extremely difficult for law enforcement. That combined with the fact that it’s so deadly in such small quantities.”

Fentanyl poses a danger not only to users but also the officers that come into contact with it. Fentanyl is transdermal and if an officer were to be exposed to fentanyl through a cut on the skin it could kill them.

“As law enforcement officers come into contact with (this), they have to be aware of the fact that it’s not just pure white powder heroin that may have fentanyl in it,” Hammac said.

Officers have to use a special kind of glove when handling the substance, they can’t just use latex, Hammac said.

Evans provided a greater understanding of the threat fentanyl poses to first responders.

“Just accidently brushing (or) touching isn’t going to absorb (it) through your skin that quick,” she said. “It’s when you’re compromised. The real danger is the air. If you move a baggy, residue or something on a desk, it floats in the air and you inhale it. That’s the dangerous part.”

Hyche shared how he and his officers approach a situation if fentanyl is present.

“We take it very seriously,” he said. “I encourage my people to err on the side of caution, because you don’t know the concentration of the drug in any substance that you encounter. And the drug dealers, the mid-level drug dealers, they don’t know what it’s been cut with.”

First responders help safeguard the public and users by securing the drug, but they do so sometimes at their own risk.

First responders continue to fight back on the growing threat of fentanyl and arrest those that distribute the substance. Many times, officers do not always have to look far.

“A lot of times it comes from aggressive patrolling,” Hyche said. “Because people who sell drugs for a living typically don’t take care of things, like keeping their tag current or having a licensed insurance, or they commit traffic violations and then we’ll recover quantities of drugs and a lot of times, when we recover them, we will interview the person and get information on where the source is.”

The police try to go after the sources as much as possible, he said.

“We also have a partnership with the State Drug Task Force,” Hyche said. “One of our detectives here is a member of the State Drug Task Force. We have had them here in our area on multiple occasions following up on leads, going after traffickers or distributors of different types of drugs. (Our) goal is always to find the people selling and distributing the drugs, especially if they’re selling to kids.”

When officers come across overdose victims, the technology has improved enough that many who overdose still survive.

“We now have the AED device in all of our cars to shock people and we also have the Lewis devices to do chest compressions,” Hyche said. “The medical response has gotten so much better that I think a lot of people survive because of that.”

Many might have a certain image of fentanyl users in their mind, but the reality is not what some expect.

According to Evans, the average age of those who have overdosed on fentanyl is 43-45.

She said she does not know the sole reason for why the demographic is what it is and can only speculate.

Overall, the NCHS found that the rate of drug overdose deaths increased for all categories including sex, age, race and Hispanic-origin groups.

Given the rise in fentanyl abuse, it is easy to wonder what one should do about the issue.

Evans advises that people be aware of their surroundings when they are out.

Often times, people do not fully comprehend the danger of engaging in abuse of the substance.

“It’s very dangerous,” Evans said. “If they’re not cutting it correctly with fentanyl, if there is an extra little piece of fentanyl for you. That’s it. You are dead. I don’t understand why people take that chance. I have had conversations with families and they are very upset with me because they say, ‘He knew exactly how much to use.’ Not if it’s not mixed correctly or clumped in some way. He’s not going to be aware of that.”

A fentanyl overdose can be immediate or happen within minutes or hours, Evans said. It depends on the amount ingested and the body size of the individual.

However, if people find themselves in a situation with an individual who has overdosed on opiates like fentanyl, drugs like NARCAN can help them save their life.

NARCAN, is a drug that is publicly available that can be obtained in case of emergency to help any that might suffer an overdose.

According to an article by the National Institute on Drug Abuse, Naloxone, the generic name for NARCAN, is a medicine that rapidly reverses an opioid overdose. Since fentanyl depresses the respiratory system, Naxolone can help to quickly restore normal breathing to an individual during an overdose.

Naloxone should be given to any person who shows signs of an opioid overdose and can be given as a nasal spray or injected into muscle, under the skin or into the veins, according to NIDA. Those who wish to obtain NARCAN can do so by visiting their local major pharmacy and asking if it is available.

Those that are dealing with a family member that has an addiction may seek a professional for help. Substance Abuse and Mental Services (SAMHSA), has a national helpline available at 1-800-662 HELP.

The organization, COMPACT seeks to address the full spectrum of substance misuse in Shelby County through prevention, intervention and education. Its main line can be reached at 205-605-1824, parents can reach out at 205-605-1827 and teens can reach someone at 205-605-1830. More information can be found by visiting its website at Compact2020.com or through its Facebook page at Facebook.com/COMPACT2020.