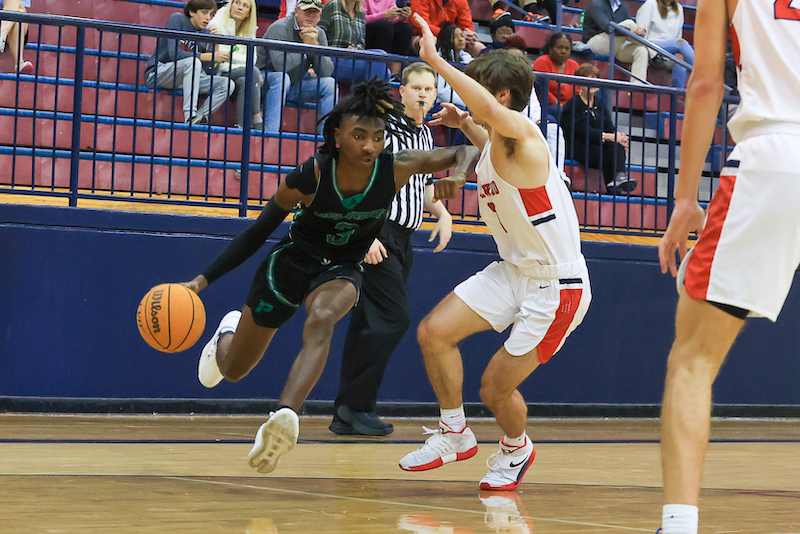 Calera hosted Pelham on Thursday, Dec. 1. (For the reporter/Dawn Harrison)

CALERA – The Pelham Panthers traveled to Calera on Thursday, Dec. 1 to take on the Eagles. The Panthers’ first quarter packed a powerful punch that they continued to carry throughout the remaining quarters of the Thursday night game. Pelham defeated Calera 72-48.

Pelham picked up a 10-point lead in the first quarter after totaling 22 points. Joe Wimberly and Jackson Germek led with six points each. Wimberly knocked down three baskets inside the arc and Germek scored two three-pointers.

Kamari Hollis followed with three points from the free-throw line and a two-pointer. Dynarian Long and Jordan Henschel totaled a combined five points.

and Kane Burns knocked down a two-pointer each.

Corey Perkins, Germek and Wimberly picked up the lead for the Pelham Panthers in the second quarter. Perkins and Germek went two for two at the free-throw line and knocked down a three-pointer. Wimberly got two two-pointers and a single free throw.

Thompson Gennari and Henschel totaled two points each for the Panthers before the first half concluded.

Calera finished the first half with seven more points. Brandon Caldwell led the Eagles in the second quarter with four points.

Pelham led 41-19 before the second half started.

Calera picked up 13 points in the third quarter and another 16 in the final. Caldwell led the Eagles in the second half with six points.

Hollis and Wimberly totaled a combined 12 points out of the 15 points the Panthers acquired during the third quarter.

Pelham finished the night with another 16 points to top off its latest win of the season. Hollis and Wimberly totaled another four points each.