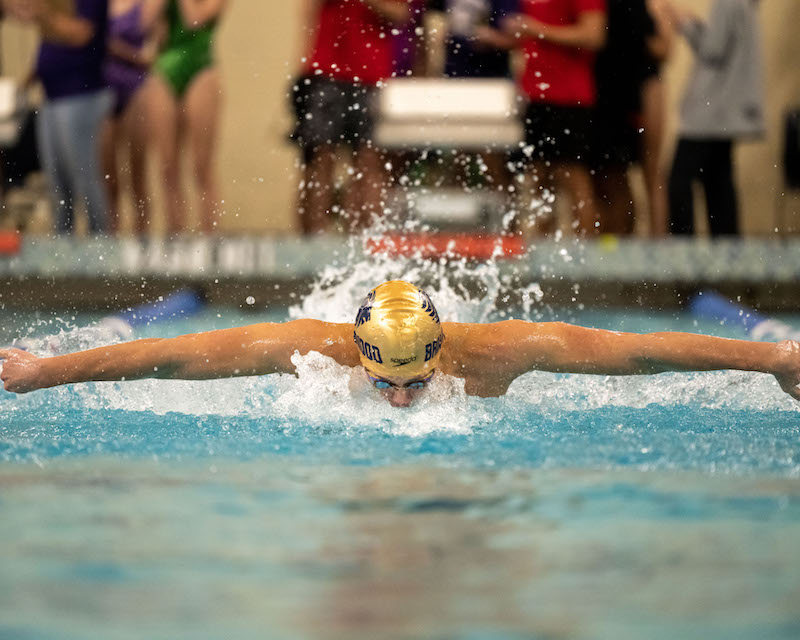 AUBURN – Spain Park, Briarwood, Oak Mountain and Thompson all competed in the Swimming and Diving State Competition held at Auburn University. Swimmers who received qualifying times at Prelims on Friday, Dec 2, advanced to the championship on Saturday, Dec. 3.

The Spain Park Jaguars placed 16 overall out of the 35 schools that competed in Auburn.

Russel continued to make a splash at Auburn after his prelim 2:07.70 earned him a spot in the 200-yard Medley championship. Russel jumped from 14th place to 11th in the state competition with his final time of 2:04.03.

McCay’s time of 2:12.79 from prelims in the 200-yard medley may have earned him an alternate spot in the final race, however, McCay placed 18th overall.

Jordan Phillips, Eisuke Adachi, Christian Corgill and Jacobsen finished in 14th place for the 200-yard Freestyle relay both in the prelims and finals. The relay’s final time was 1:39.71.

Corgill, Revanna, McCay and Williams finished the championship for Spain Park after placing 13th in the 400-yard Freestyle relay. The final time for the relay was 3:35.73.

The Briarwood Lions finished in 17th place after the team’s performance at prelims and finals.

David Carroll, Jackson Cooke, Andrew Groves and Brandon Dixon placed 14th in both the prelims and finals for the 200-yard Medley relay. The relay shaved over four seconds off their finals time going from 1:57.54 to finishing at 1:53.28.

Carroll, Cooke, Groves and Dixon competed again in the 200-yard Freestyle relay. The relay finished in 18th place with a time of 1:41.63.

The Thompson Warriors’ Football team was not the only athletic team competing in Auburn that week. Thompson’s swim team placed 27th in the state.

The Oak Mountain Eagles placed 32nd in the state for the Class 6A-7A Division.

Chase Pollard was one of the alternates fortunate enough to compete in the 50-yard Freestyle. At prelims, Pollard finished in 17th place with a time of 23.96. He stepped in the following day and placed 16th timing at 23.57.

Pollard competed in the 100-yard Butterfly in his final event at Auburn. At prelims, he placed 14th with a time of 55.40. Cutting his time by a little over a second at finals resulted in Pollard finishing in 11th place.