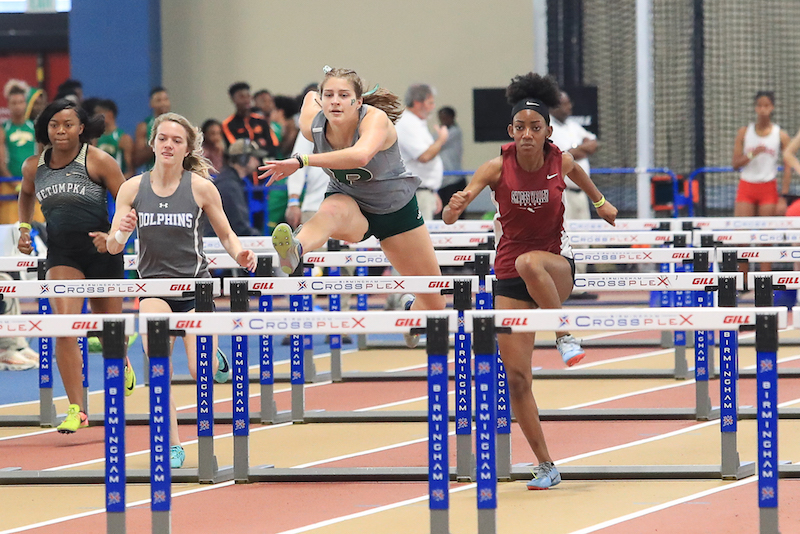 BIRMINGHAM –  Chelsea, Thompson, Calera, Helena Pelham and Shelby County all competed in the girls’ events in the Magic City Track and Field Invitational held at the Birmingham CrossPlex on Saturday, Dec. 3.

The Chelsea Hornets competed in nine events at the invitational and had several student places within the top 10. Lily Rigor came in sixth place with a time of 8.07 in the 60-meter dash. Jadlyn Debardlabon followed not too far behind Rigor in 10th place.

In the 800-meter run, Chelsea had three runners place within the top 10. Mia Dunavant came in first place with a time of 2:20.14. Tyndal Ann Griffith finished in fourth place and Brylee Bennett placed seventh overall.

Jadlyn Debardlabon finished in second place for the Hornets in the High Jump and Alana McCulla came in second in the Pole Vault event.

The Pelham Panthers were present at the Magic City Invitational. Ana Bravo came in eighth place for Pelham in the 800-meter run. Bravo finished with a time of 2:39.67.

In the 60-meter hurdles, Pelham’s Emma Grace Howard came in third with a time of 10.80. With a time of 11.43, Anna McDonald finished eighth overall.

Jocelyn Elliott came in second place in the High Jump and Howard finished in eighth place in the Triple Jump for the Panthers.

Thompson placed within the top ten in three events at the invitational. Jasiel Johnson and Kiya Chasen finished in sixth and seventh place in the 400-meter run. The Thompson Warriors’ relay team came in fifth in the 4X200-meter relay.