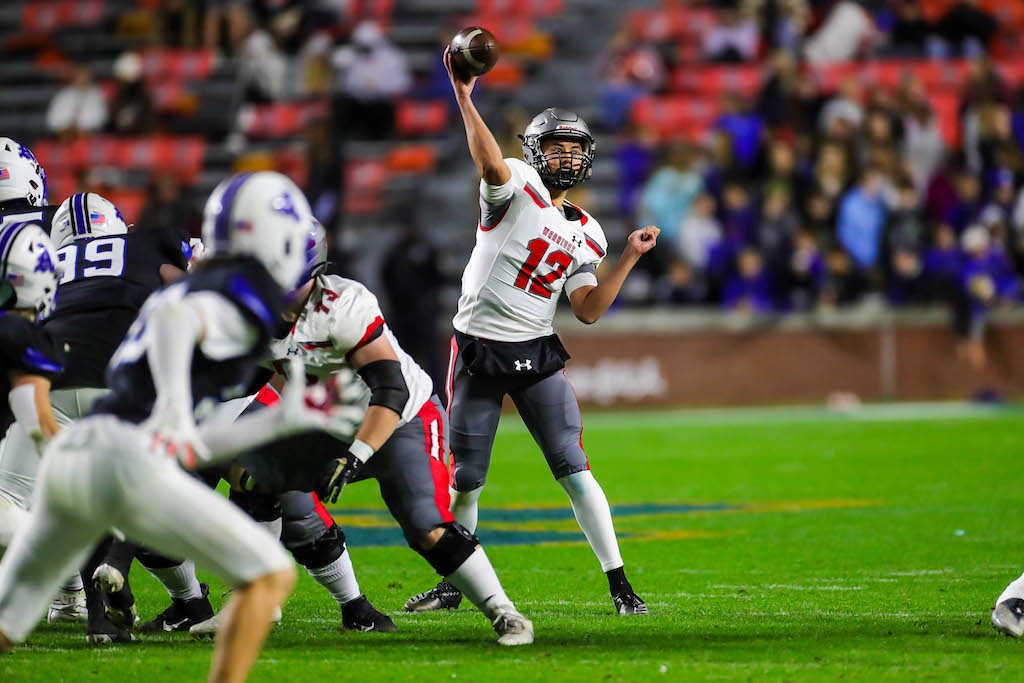 Trent Seaborn's 2022 season was a rollercoaster ride that ended with him throwing for five touchdowns and more than 200 yards in the Class 7A State Championship game to lift the Warriors to their fourth title in a row. (For the Reporter/Eric Starling)

When he first met Korbyn Williams this past summer during workouts with the Thompson Warriors, eighth-grade quarterback Trent Seaborn knew they had a special connection, but he couldn’t fathom what would transpire inside Jordan-Hare Stadium four months later.

As Seaborn jogged to midfield on Wednesday night, Nov. 30 to accept the MVP award following a record-setting performance in the Class 7A State Championship game, his photo was taken, but the entire time, his mind was thinking about the teammate he connected with on four of his five touchdown passes.

Shortly after the picture with his plaque, he returned to his team, and in a matter of seconds, he turned to Williams and handed him the MVP plaque before the two embraced in a hug to celebrate a 49-24 victory over the Auburn Tigers for Thompson’s fourth consecutive state championship.

“I met Korbyn in the offseason, and he was a really cool guy and really down to earth,” Seaborn said. “I threw with him, and I thought, wow, he’s a really great receiver. We just bonded from there. Throughout the season, I was able to hit him every now and then. We were always on the same page. When the defense was doing something in particular, not only did I know what was coming, but he knew what to do at the exact same time.” 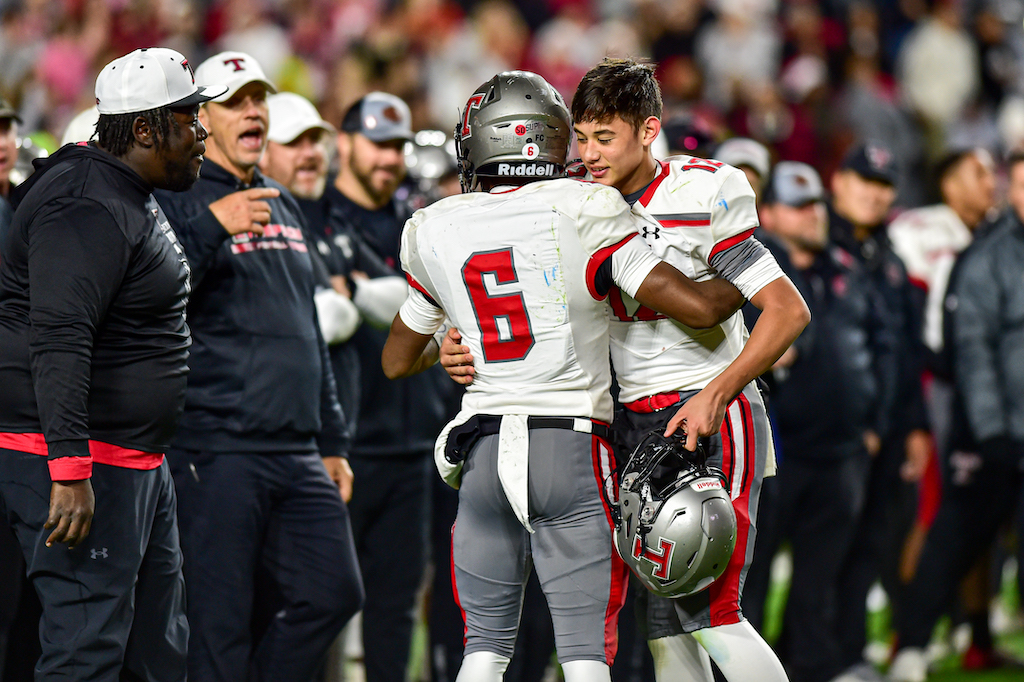 Seaborn hugs Korbyn Williams after sharing the MVP plaque with him. (For the Reporter/Jeremy Raines)

That trust in one another led to the two connecting for 142 yards and four touchdowns in the state championship victory.

A bond that began before the season with the two, despite a five-year grade level gap, continued throughout the year with them meeting up on weekends to workout and throw together, and it eventually led to the breakout game in the state championship.

“It meant a lot, knowing that Trent really did deserve MVP,” Williams said of his teammate sharing the MVP plaque with him. “He’s a really good quarterback, but we all play as a team so it was all a team effort. In my book, we both had MVP.”

For Seaborn, he went on to finish the championship game with a 12-14 performance that featured 207 yards and a new Class 7A Super 7 record five touchdowns… as an eighth grader.

But the path to that record-setting game wasn’t an easy one, as he spent much of the season splitting time with good friend Zach Sims, who battled an injury the majority of the season.

From the start of the season, those two formed a tight bond, and both got in their share of games starting with the opener against Buford (Ga.) in a matchup of two teams ranked inside the top 10 nationally.

From that point forward, both knew they had to be there for one another to make sure they focused solely on being the best they could for the team.

“Zach really took me under his wings and taught me everything he knows,” Seaborn said. “Without Zach teaching me that, it wouldn’t have gone as smooth. Our relationship is unbroken. There is no one else I’d rather have a closer relationship to than him. He was my support throughout the season and I was his support. We helped each other through everything, from small details in throwing technique, who we were playing next and what to read. I could go on and on. He’s helped me so much and been super supportive.”

Their bond became important for the team, as they worked together through offensive inconsistencies to help the team bounce back from 0-2 to winning 11 of the next 12 games with each leaving their mark on different games.

“I have been blessed with some good quarterbacks, and I’m blessed with Zach Sims,” Thompson head coach Mark Freeman said. “I think the friendship between those two is the reason Trent is sitting here right now.” 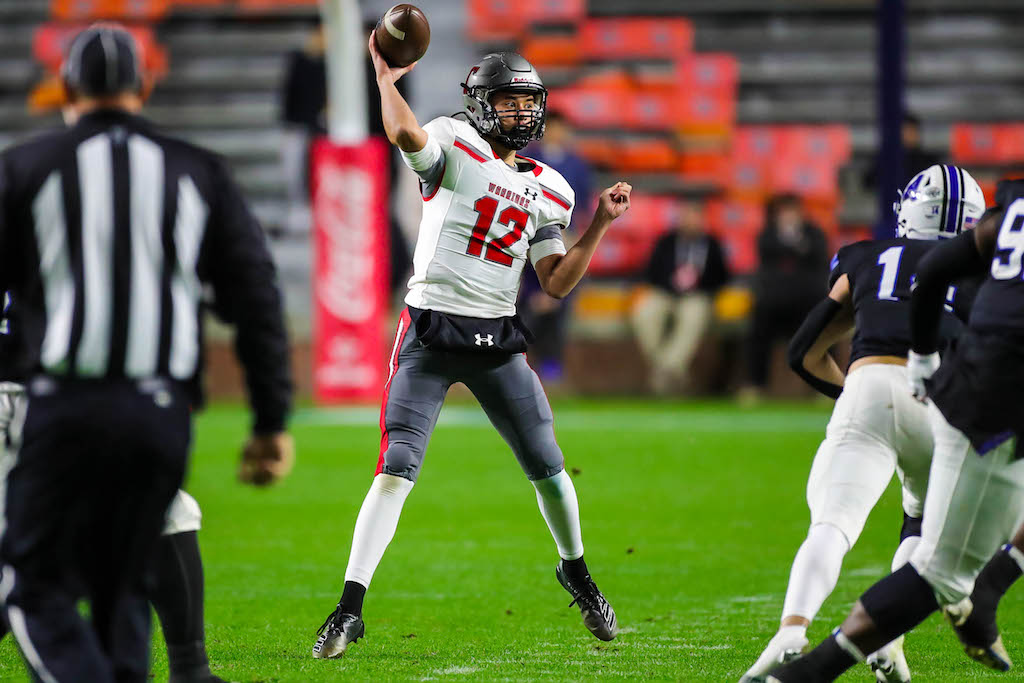 The Thompson Warriors and the Auburn Tigers compete in the AHSAA Super 7 Class 7A Championship at Jordan-Hare Stadium on Wednesday, Nov. 30, 2022.

But it wasn’t until the regular season had ended that Seaborn got his chance to start.

That meant the eighth-grade quarterback would be making his first start against Huntsville in the opening round of the Class 7A playoffs.

“I honestly didn’t find out until right before the game, but I had an idea it was coming because Zach was hurt and wasn’t able to throw as well,” Seaborn said. “It was honestly making me nervous because I wanted him to start. He started the whole season, so why not him?”

Seaborn, however, got the nod, and thus began a remarkable playoff run.

“It was my first start, and for it to be a playoff game, it’s a one-game season,” he said. “That put a lot of stress on me, but coach Freeman always says not to put pressure on yourself and to look to God if you do. Coach Freeman and Zach helped me prepare and from there, it only took a drive or two to get into the grove.”

In that first start, he threw for 342 yards and four touchdowns, completing 33 of his 40 passes to lead Thompson to a 34-0 shutout victory.

“That first game definitely helped boost my confidence.,” Seaborn said. “It showed me the potential I had and gave me an idea of what I could do, especially against teams in the playoffs and that competition level. It really gave me a boost for what I needed to work on in the postseason.”

But the entire postseason wasn’t smooth sailing, as Seaborn combined for 114 yards and no touchdown passes in a 21-12 quarterfinal win against Vestavia Hills and a 40-10 semifinal win against Hoover.

During that span, however, Seaborn limited mistakes and turnovers, while following the game plan the coaches put together, which featured heavier doses of running the football against two of the state’s best defenses.

“You just have to stay ready,” he said. “Coach Freeman, all the coaches develop great game plans. Sometimes defenses are going to play a drop back coverage and you’re going to have to run the ball, which is what we faced. You just have to do what’s going to beat the defense. I just stayed prepared to throw the ball when I needed to, and when that did happen, I just tried to make the most of it.” 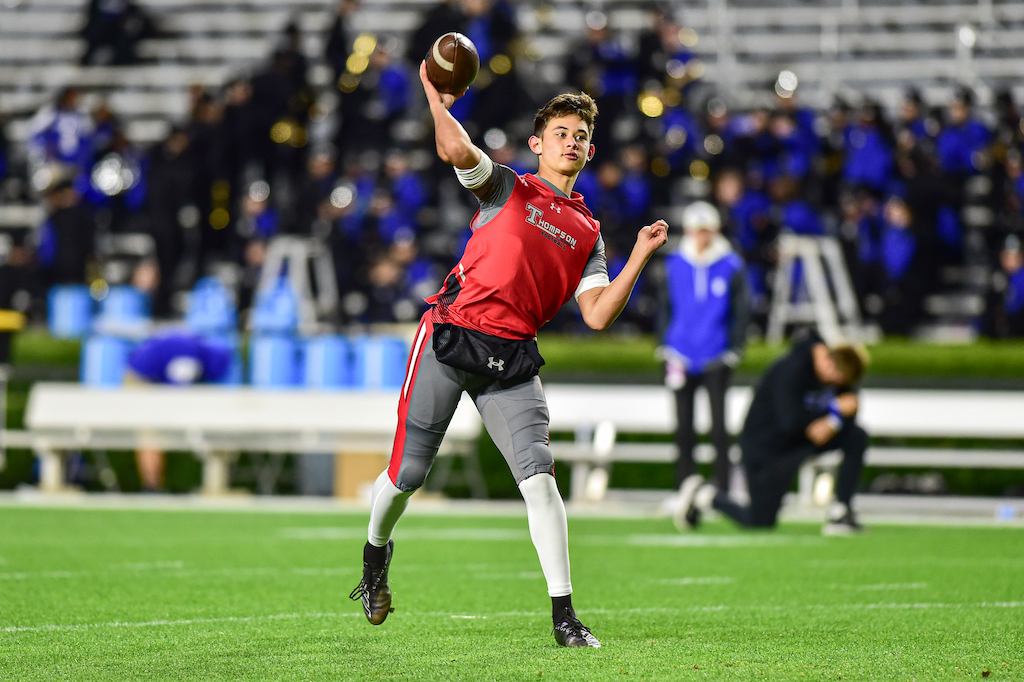 But going into the state championship game, with even more time to prepare, the game plan shifted.

While the Warriors still didn’t plan on throwing 50 times, they knew they could hit big plays in the passing game.

When he stepped out on the field to take his first snap of the championship game, there were some nerves, but his mind was on one thing.

“What’s the defense look like? Did it look the same as on film? Did they do what we expected them to do?” he recalled of what his mindset was a week later. I didn’t let anything else get in my head. It’s just the same game as it was in the regular season.”

To answer his own questions, he said the defense looked exactly like what they expected.

“We were definitely well prepared for what the defense was going to do,” Seaborn said. “Coach freeman and all the coaches had the right plan, and we took advantage of that.” 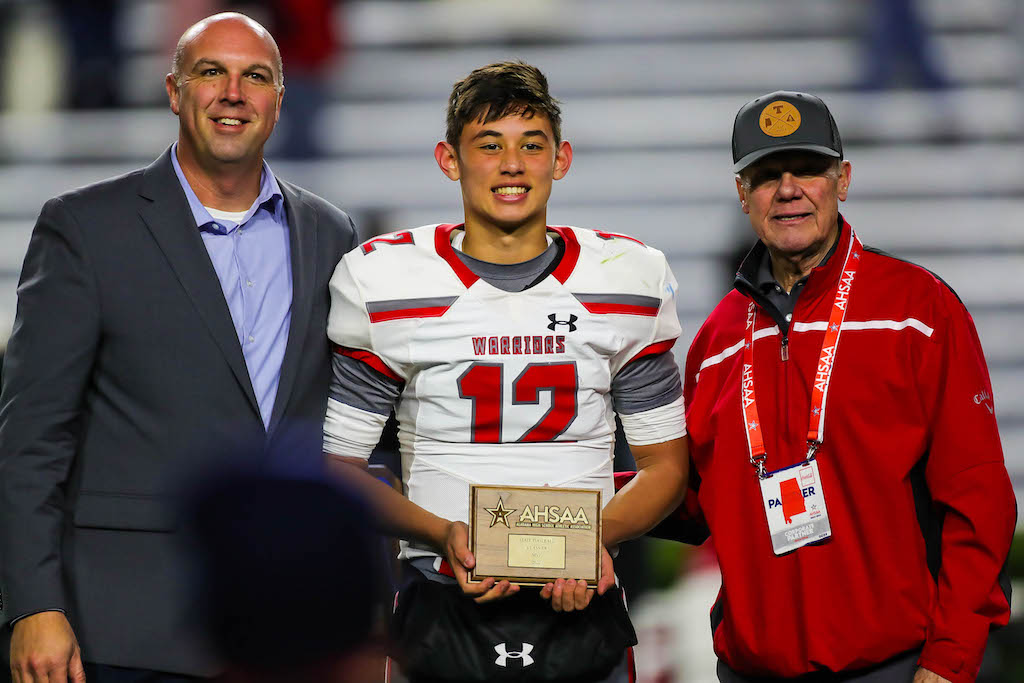 The Thompson Warriors and the Auburn Tigers compete in the AHSAA Super 7 Class 7A Championship at Jordan-Hare Stadium on Wednesday, Nov. 30, 2022.

He said that, along with the run game and the offensive line, quickly helped him get over any nerves he had throughout the week and a half leading up to the game.

In the weeks leading up to the game, the rushing attack had totaled 120 yards in the quarterfinals and 247 yards in the semifinals.

“We have such a great running game, two great backs and an O-Line that we knew we could draw the defense in and lull them to sleep and then throw it over the top, and honestly, our run game is what helped us be so successful throwing the ball,” Seaborn said.

In the championship game, the Warriors ran for 171 yards, while the offensive line finished off a postseason that featured no sacks given up to the young quarterback.

“I did not expect that performance,” Seaborn said of the success he had. “I honestly thought the whole team was going to do great because of the coaches preparing, but we were joking before the game, guys were asking, ‘How many touchdowns do you think you’ll have?’ I was like, ‘Honestly, I’d be okay with one.’ Not many people get to throw a touchdown in a championship game, so I was just really blessed to have that opportunity.”

For Freeman, the success came as no surprise.

“I met this little guy when he was in the third grade,” Freeman said. “We threw the ball together, and I knew he was special then. I never knew God was going to open the door, through the death of his grandpa, to come here one day. He’s a blessing.”

Now, after the incredible performance and with four years left as a varsity player, Seaborn is determined to not let this year’s stretch get to his head. Instead, he’s using it as motivation.

“It’s just something you keep as a memory to cherish,” he said. “Now, it’s time to keep working and focus on what you can do to get better. Like coach Freeman always says, it’s rat poison because once you go down that path, it’s tough to recover. It makes me want to work even harder to see how far I can go. I would like to have many more experiences with more kids. I want to drive throughout this offseason to create more relationships with the guys on the football team, because that’s what makes football fun, is creating those relationships fun with all the players.”

He said when looking back on this season, he has never seen a team that has fought through the adversity they did, saying God gave them challenges to overcome and they always tried to glorify him in how they responded each step of the way.

Now, he and the Warriors will shift their attention to the offseason as Seaborn hopes to be part of a fifth consecutive championship during the 2023 season.