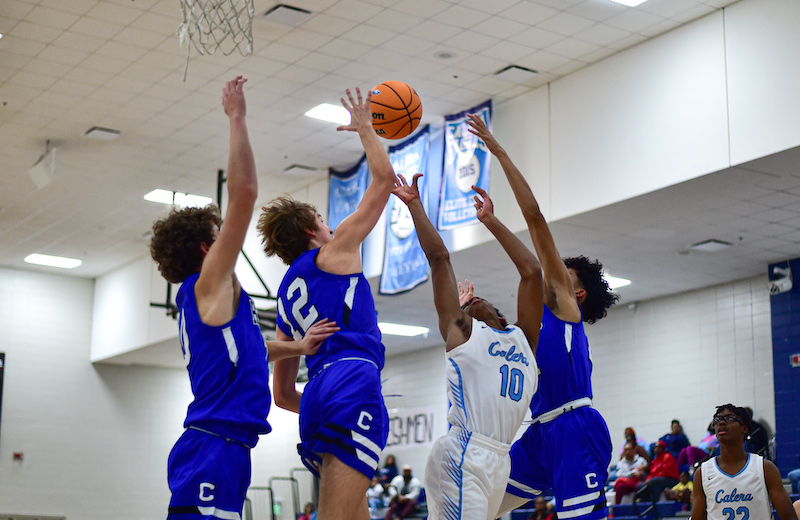 For the Reporter | Jeremy Raines

CHELSEA – A big night for Chelsea’s Paul Lazi on Tuesday, Dec. 6, in its recent county battle against the Helena Huskies. Lanzi came into the game 16 points shy of scoring 1000 points in his high school career. Tuesday night, Lanzi totaled 18 points.

The Chelsea Hornets picked up a slight lead in the first quarter, however, the Huskies put up a fight and tied the score 6-6 in the fleeting minutes of the game. With a second left on the clock, the Hornets broke the tie.

Junior Avery Futch knocked down the first basket outside the arc for the Hornets in the first quarter. Alexander Redd and Aiden Owens totaled two points each. Dylan Brown tagged on one point from the free-throw line.

Chelsea created more separation before halftime was called after knocking down 15 more points. Lanzi led the Hornets with seven points from one three-pointer, a two-pointer and two free throws.

Williams led the Huskies in the second quarter with one three-pointer and one two-pointer. Owen Davis followed with four points and Johnigan topped off the first-half score with a free throw.

Chelsea secured its latest victory in the second half after totaling 16 points in the third quarter and another 24 points in the final quarter. The Hornets defeated the Huskies 57-37.

The Hornets’ gym was electrified as Lanzi knocked down his 1000th point of his career. Lanzi went six for six from the free-throw line. He also knocked down another basket inside and outside the arc.

Johnigan carried the Huskies in the second half of the game after knocking down 10 points in the final quarter. Johnigan totaled four points from the free-throw line and six from two baskets outside the arc.

Davis and Williams tagged on two more points each.

Chelsea hits the road to Sylacauga on Thursday, Dec. 8. The Huskies return home on Friday, Dec. 9, to take on Bibb County.